Posted at 18:19h in Biotechnology by admin 0 Comments
0 Likes
Share

The current treatment options for this disease are aimed at alleviating symptoms and are multidisciplinary in nature. However there are companies that are engaged in extensive research and development activities, and trying to create novel therapeutics for this disease. Gene Therapy, Enzyme replacement therapy, stem cell and substrate reduction therapy are some of the emerging fields, which are offering hope to both the patients and caregivers. 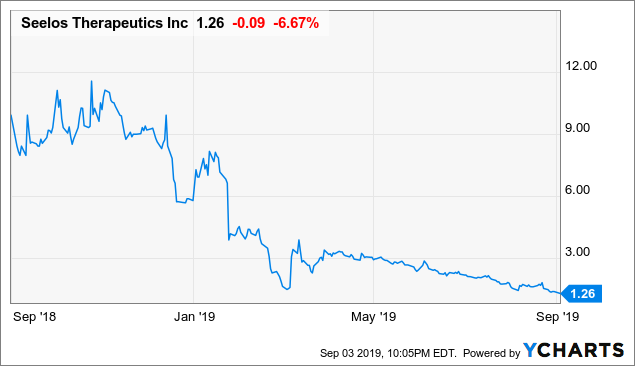 Seelos Therapeutics, a clinical-stage biotechnology Company which is developing SLS-005 (trehalose) for the treatment of Sanfillipo syndrome, announced the acceptance of its Investigation New Drug (IND) application by the FDA in August 2019. The company is planning to initiate a combined Phase IIb/III, multicenter study to assess the safety, tolerability and efficacy of trehalose IV in Sanfilippo A and B and will evaluate the results based on functional outcomes, biomarkers, neuro-cognitive assessments and quality of life measurements. The company has received the FDA’s approval for initiating its clinical trials.

Seelos acquired Trehalose, an investigational molecule for treatment of two rare diseases, from Bioblast Pharma, in February 2019. The deal was for a total consideration of $3.5 million, to be payable in two installments. Seelos will pay $1.5 million upon closing of the sale and the other $2.0 million will be paid upon the first anniversary of the closing of the sale. SLS-005, its lead candidate for the Sanfilippo syndrome, is being developed in collaboration with the Team Sanfilippo Foundation (TSE).

Team Sanfilippo Foundation (TSE) is sponsoring an open label, 2b clinical trial in up to 20 patients, for assessing the safety and efficacy of SLS-005 (Trehalose). This would be in addition to prior phase 2 clinical studies in over 70 patients, which demonstrated positive safety profile and promising efficacy signal.

In the pipeline is SLS-002, for treatment of Suicidality in PTSD and MDD and SLS-008 in pediatric esophagitis and other undisclosed indications. The company has a multi-program partnership with Ligand Pharmaceuticals (NASDAQ: LGND) for worldwide rights to develop and commercialize the SLS-006, SLS-008, SLS-010 and SLS-012 programs from Ligand. It is a shareholder in Seelos pursuant to a cash investment and will further receive an equity milestone payment in addition to receiving potential future milestone payments and royalties for licensed programs. 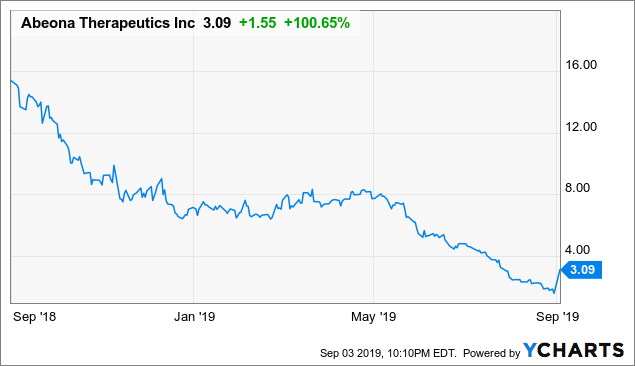 A clinical-stage Biopharmaceutical Company, Abeona Therapeutics Inc is developing an AAV-based gene therapy named ABO-102, which has received the orphan drug designation, rare pediatric disease and RMAT and Breakthrough therapy designation from the FDA. ABO-102 uses an AAV9 vector platform to deliver a functional copy of the defective SGSH gene to cells in the central nervous system. It is designed to be one-time gene therapy that will help the body generate its own enzyme to break down glycosaminoglycans. The company is currently conducting a Phase I/ 2 trials for high-functioning patients, with plans to conduct another trial for patients with advanced form of the disease as well.

The company is also working on creating therapeutics for Epidermolysis Bullosa (EB) and Batten disease. ABO-002 is designed to use an AAV9 vector platform, to deliver a functional copy of the PPT1 gene, the defective CLN1 gene, using a combination of intravenous and intrathecal administrations. This can promote proper metabolism in lysosomes by activating the PPT1 enzyme.

The company is planning a phase I /2 trials, after the acceptance of an investigational new drug application by the FDA in May 2019. Results from preclinical trials have demonstrated the safety and tolerability of the drug, along with improvement in survival rates, motor function and cognitive abilities in mice. The drug has been awarded an Orphan Drug Designation and a rare pediatric disease designation in the U.S, in addition to an Orphan Drug Designation in the E.U. 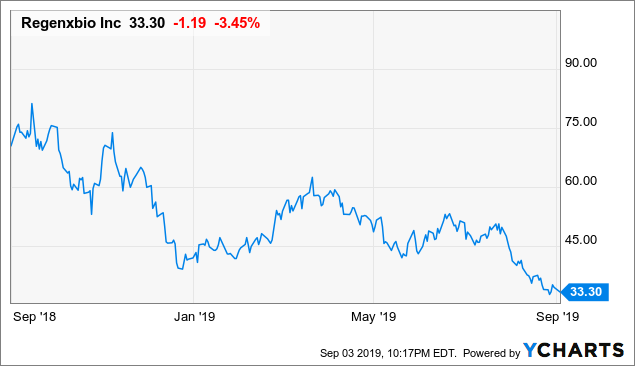 In November 2018, the company entered into an agreement with Abeona Therapeutics Inc, for the use of NAV AAV9 Vector, RegenxBio’s proprietary AAV platform, for the development of treatment of rare diseases such as Sanfillipo and Batten Disease. As part of the agreement RegenBio would receive a $20 million upfront payment, in addition to $100 million in annual fees, payable from the 6 year onwards with a guaranteed 20 million payment and another 60 million in milestone payments, besides low double-digit royalties on net sales. Abeona will receive the exclusive worldwide license, with rights to sublicense.

The company is also developing a one-time gene therapy RGX-181, which has been granted an orphan drug designation and a rare pediatric drug designation by the FDA, for the treatment of late-infantile neuronal ceroid lipofuscinosis type 2 (CLN2) disease, a common form of Batten Disease. RGX-181 uses the AAV9 vector to deliver the tripeptidyl peptidase 1 (TPP1) gene, whose deficiency is the primary cause of CLN2, directly to the central nervous system (CNS). RegenexBio is preparing to file an investigational new drug application (IND) for the same in 2019. 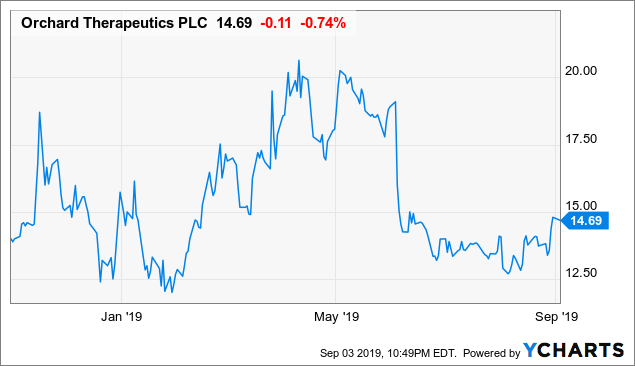 Orchard Therapeutics ex vivo autologous gene therapy uses stem cells collected from a patient’s body, and modified using a viral vector, carrying a functioning copy of the missing or faulty gene that are then transplanted back into the body, to correct genetic disorders

Its primary focus is on developing therapeutics for life-threatening inherited disorders, such as primary immune deficiencies, inherited metabolic disorders and blood disorders. OTL-202 is its lead candidate for the treatment of Mucopolysaccharidosis type IIIB (MPS-IIIB), and is an ex vivo autologous lentiviral gene therapy, capable of delivering a functional copy of the missing NAGLU gene. This is achieved through a hematopoietic stem cell transplant.

Its pipeline consists of OTL-101, indicated for the treatment of ADA-SCID (adenosine deaminase severe combined immunodeficiency), which has been granted a rare pediatric disease designation and breakthrough therapy designation by the FDA.

In addition, the company is developing Strimvelis, which was acquired from GSK, for treatment of ADA-SCID. This drug has received an EMA approval in 2016, making it the first approved treatment for ADA-SCID, in the absence of a stem cell donor. It has submitted three product approvals for leukodystrophy (MLD), ADA-SCID and WAS, for which it is expecting approvals to come through by end of 2021. The company plans to file a BLA submission in the first half of 2020, followed by marketing approvals.

The company is also developing OTL-103 for the treatment of Wiskott–Aldrich syndrome (WAS), OTL-102 for X-linked chronic granulomatous disease (or X-CGD) and other neurometabolic and Hemoglobinopathies such as Metachromatic leukodystrophy (MLD), to name a few. 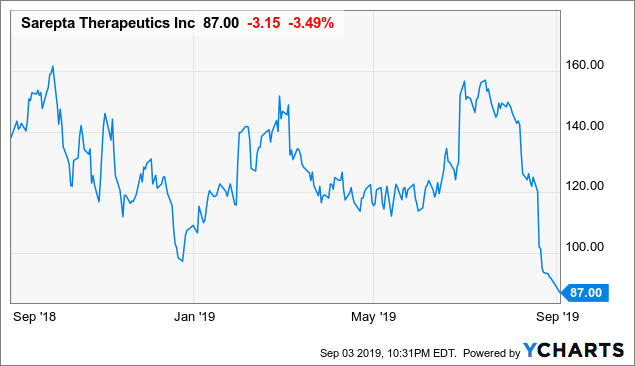 The company is developing LYS-SAF302, an AAV based gene therapy that can substitute a dysfunctional SGSH gene with a working copy. It uses the AAVrh10 virus, which has the ability to target the central nervous system. Sarepta entered into a licensing agreement with Lysogene (LYS.PA), a gene therapy company, for exclusive commercial rights in the United States and worldwide markets except Europe, while Lysogene holds the rights for the European Market. The Companies initiated a Phase 2-3 clinical trial for testing the safety and efficacy of  LYS-SAF302, which resulted in a milestone payments of USD18 million from Sarepta to Lysogene.