Bionano Genomics Skyrockets on Published Study on Autism Risk Gene. Can it maintain the Momentum? 07 Jan Bionano Genomics Skyrockets on Published Study on Autism Risk Gene. Can it maintain the Momentum?

Posted at 11:37h in Biotechnology by admin 0 Comments
3 Likes
Share

Bionano Genomics, Inc. (NASDAQ: BNGO), creator of the leading-edge optical genome mapping platform, Saphyr, announced that Lineagen, its diagnostic services subsidiary has achieved the most comprehensive analysis of the genome of high functioning individual with Autism Spectrum Disorder (ASD). The subject of the study is Professor Temple Grandin, an avant-garde PhD Scientist having a high-level of functioning and acute awareness of her condition.

Lineagen leveraged its customizable genetic tests such as FirstStepDx PLUS chromosomal microarray, NextStepDx PLUS whole exome sequencing, and whole genome sequencing to identify unique variants in known ASD risk genes and other genetic variants that have led to improvement in the clinical management of her symptoms. In addition, it also enabled them to recognize sequence variants in three ASD risk genes and structural variants in other neurodevelopmental genes, which in combination would help explain her history of pain, insomnia, anxiety, panic attacks and missing teeth. The analysis also led to some critical insights into her metabolism of drugs such as warfarin, which would help prevent bleeding-related issues during surgery.

“This publication shows the importance of genetic testing for ASD and neurodevelopmental disorders. ASD is typically diagnosed based on a child’s behavior, and only 3% of children with an ASD diagnosis get clinical genetic testing, which is recommended by a number of professional medical organizations including the American College of Medical Genetics and Genomics and the American Academy of Pediatrics. Widespread adoption of genetic testing is important to patients and families because it creates a better understanding of ASD, but more importantly, informs families and patients about immediate health risks associated with ASD that could personalize treatment options and provide potentially life-saving information.

The Company intends to extend the study to the next phase, by using optical genome mapping (OGM) with Saphyr, to obtain a more accurate picture of the genomic variants that can significantly improve healthcare outcomes.

Lineagen was acquired by Bionano in August 2020 in consideration for nearly $9.6 million, including 6,167,510 shares of Bionano’s common stock, approximately $1.7 million in cash and assumption of approximately $2.9 million in liabilities as per the Company. 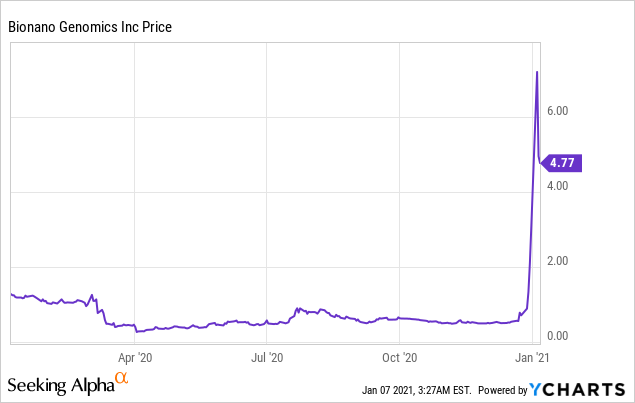 Autism Spectrum Disorder is a group of developmental disorders that can cause significant social, communication and behavioral challenges as per the CDC. Though the disorders do not manifest in the form of physical differentiators, there is marked difference in the emotional, mental, cognition and social interaction skills exhibited by those suffering from the disorder. The disease is primarily diagnosed based on behavior and development of the child such as repeated actions, inability to adapt to changes in routine, lack of social interaction, inability to exhibit or respond to interest, empathy and other emotions, dislike of physical contact to name a few.

There is no cure for these disorders at present, with boys being 4 times more likely to be affected than girls, and early intervention treatment being the best course of treatment, aimed at assisting the child with learning critical skills such as walking, talking, speech therapy and social interactions. Autism can be are caused by multiple risk factors  like genetic disorders, family history, specific genetic or chromosomal conditions, such as fragile X syndrome or tuberous sclerosis, intake of prescription drugs such as valproic acid and thalidomide to name a few.

According to the CDC, the total cost for children with ASD in the U.S are estimated to be between $11.5 billion – $60.9 billion (2011 US dollars), which includes costs of medical care, special education needs and loss of parental productivity. It is currently working on a study namely Study to Explore Early Development (SEED) that is trying to analyze the possible risk factors for ASD.

A report by Fortune Business Insights estimates that the global autism spectrum disorder market will reach US$ 4.61 Billion by 2026, growing at a CAGR of 4.3 percent, from USD$3.293 Billion in 2018. Bionano is focussed on becoming the leader in digital cytogenetics by combining its cutting-edge Saphyr System with CLIA Diagnostic services offered through Lineagen. The Company is not only aiming to address the glaring gap in proper testing and accurate diagnosis of neurodevelopmental disorders, which prevents them from receiving the optimal treatment for their condition, but also seeks to deliver actionable genetic markers for blood cancers, thereby improving the diagnosis and survival rates.