BrainStorm Cell Therapeutics (NASDAQ: BCLI), a Company focussed on developing autologous cellular therapies for neurodegenerative diseases, has been awarded the Buzz of Bio 2020 in the public therapeutic biotech category. The award recognises the efforts of Brainstorm in the field of neurodegenerative diseases, including progressive multiple sclerosis (MS). The contest shortlists U.S companies that are engaged in groundbreaking, early-stage potential investigational therapies that can save lives as well as bridge the gap between companies and investors by helping them connect.

The awards recognise top biotechnology companies in three categories namely Public Therapeutic, Private Therapeutic and Diagnostics and beyond. BrainStorm was nominated in the Public Therapeutic Biotech category, which requires a Company to be actively involved in developing a human treatment to be reviewed by the U.S Food and Drug Administration.

The Company’s lead program NurOwn (MSC-NTF Cells), intended for treatment of patients with progressive MS, is currently enrolling patients in a phase 2 open-label trail, which is evaluating the safety and efficacy of repeated administration of NurOwn (MSC-NTF Cells). MSC-NTF Cells also known as Mesenchymal Stromal Stem Cells Secreting Neurotrophic Factors is the Company’s proprietary, targeted, innovative validated autologous cellular technology platform. The study is enrolling up to 20 adults with either secondary progressive or primary progressive MS at 3 sites in the U.S.

“Thanks to everyone who voted for BrainStorm during the Buzz of BIO competition,” He further added “The entire management team at BrainStorm was very pleased with the results of this competition, and we look forward to presenting to an audience of accredited investors who may benefit from the company’s story. We thank the BIO [Biotechnology Innovation Organization] team for singling out BrainStorm’s NurOwn as a key technology with the potential to improve lives.”

The Company is also being engaged in a phase III trial for treatment of patients with amyotrophic lateral sclerosis (ALS). 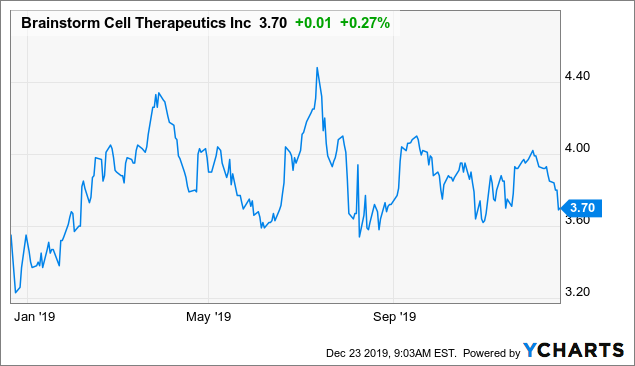 Multiple Sclerosis is one of the diseases that will be covered under the National Neurological Conditions Surveillance System (NNCSS), a system that is being built by the Centers for Disease Control and Prevention (CDC) as part of the 21st Century Cures Act 2016, which has finally received funding in 2019 after being approved by the congress. As part of the initiative, it will collate data on areas of biggest impact for neurologic conditions such as incidence, age, race, ethnicity data, as well as geographic data.

A favorable government and regulatory environment, growing incidences of MS along with advancement in technology will propel the growth in the MS treatment Industry. However delay in diagnosis, prohibitive treatment costs along with adverse side-effects will hamper its growth. The global multiple sclerosis treatment market is expected to grow at a CAGR of 3.5% during forecasted period 2017-2023 according to a report by ResearchAndMarkets.Com which also predicts that the global multiple sclerosis drugs market which was valued at US$ 16.13 Billion in 2016 is expected to reach US$ 27.38 Billion by 2025, expanding at a CAGR of 6.3% from 2017 to 2025.

GlobalData’s report titled ‘Dynamic Market Forecast: Multiple Sclerosis’ projects that the MS market will grow in sales from $19,063M in 2016 to $25,566M in 2026 with a compound annual growth rate (CAGR) of 3%. Multiple Sclerosis affects approximately 1 million individuals in the US and 2.5 million worldwide according to a study. The direct healthcare cost of this illness is estimated to be in excess of $10 billion annually in the U.S alone.

Though the exact cause of this disorder is as yet unknown, some companies are using the rapid advancements in technology to improve diagnosis, understand the cause and alleviate the symptoms that are characteristic of MS Amyotrophic Lateral Sclerosis (ALS) or Lou Gehrig’s disease is a progressive neurodegenerative disease, characterized by the atrophy of nerve cells in brain and spinal cord, leading to hardening and scarring in the affected region. As the disease progresses, patients gradually lose the functioning of muscles, including those that control speech, movement and breathing. The disease manifests in two forms, sporadic and familial, with 90 to 95 percent of all cases in the U.S being Sporadic. Familial or the inherited form of the disease constitutes the other 5 to 10 percent.

According to information made available by the ALS association, there are over 16,500 Americans afflicted by this illness and nearly 5000 new cases are diagnosed each year. The life expectancy after diagnosis is merely 2 to 5 years, with an estimated $250,000 being spent on out-of-pocket treatment costs. The Global ALS treatment market is expected to be worth over USD 3.6 billion by 2026, growing at a CAGR of 21.6 percent, from USD 0.75 billion in 2018, according to a report by Data Bridge Market Research. BrainStorm is using its proprietary autologous cellular technology platform (NurOwn®) for creating innovative therapies for neurodegenerative diseases. The Company’s Autologous MSC-NTF cells platform, is capable of targeting disease pathways crucial in neurodegenerative disorders, and is obtained from a patient’s own bone marrow-derived MSC’s. Mesenchymal Stromal Stem Cells are harvested and differentiated in culture, to secrete high levels of Neurotrophic Factors, which are then injected into the patient. These enable the delivery of multiple NTF’s and immunomodulatory cytokines to the damaged areas and trigger a specific biological effect, thereby slowing the progression of the disease. BrainStorm has a robust intellectual rights portfolio for its NurOwn® technology platform, through an exclusive, worldwide licensing agreement, which gives it rights to clinical development and commercialization worldwide.

In addition, the Company’s pipeline consists of candidates for the treatment of ALS, Huntington’s disease, Parkinson’s disease, and Autism Spectrum Disorder. The Company is also conducting a phase 3 clinical trial in ALS and expects to announce topline data in Q4, 2020.