BYD Company Ltd (OTCPINK: BYDDF), a leading Electric Vehicles Manufacturer, announced a partnership with Toyota Motor Corporation (NYSE: TM), for creating a Joint venture that will focus on research and development in the field of battery electric vehicles (BEVs). The Company will be established in China in 2020 and will have equal investment from both the Companies. The new company will design and develop BEVs (including platforms) and related parts. 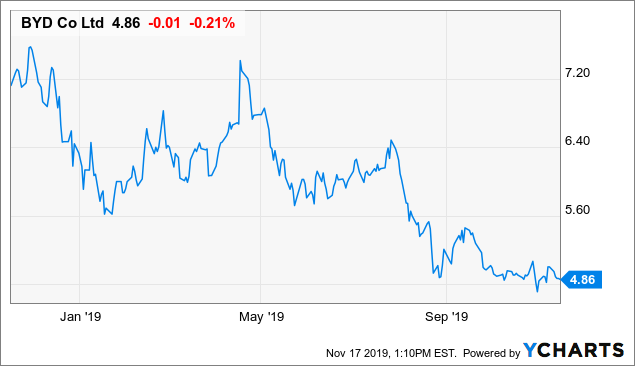 “We aim to combine BYD’s strengths in development and competitiveness in the battery electric vehicle market with Toyota’s quality and safety technology to provide the best BEV products for the market demand and consumer affection as early as we can.”

Toyota’s launched the world’s first mass-produced hybrid electric car (HEC) Prius in 1997, and has till date sold more than 14 million electrified vehicles worldwide. It has vast knowledge and expertise in the area of development, production and sale of HEV’s and their related components. The Company has invested heavily in the Chinese auto market with collaboration between Toyota Motor Engineering & Manufacturing (China) Co., Ltd. (TMEC) and the R&D centers established at Chinese joint-venture companies with China FAW Group Corporation (FAW) and Guangzhou Automobile Group Co., Ltd. (GAC) as per a Company statement.

“With the same goal to further promote the widespread use of electrified vehicles, we appreciate that BYD and Toyota can become ‘teammates’, able to put aside our rivalry and collaborate. We hope to further advance and expand both BYD and Toyota from the efforts of the new company with BYD.”

The Company is on a roll with the Los Angeles Department of Transportation placing an order for 130 battery-electric K7M buses. This order is the single largest order ever received for battery-electric buses to date in the United States. The project is part of the city of Los Angeles “Green New Deal”, which aims to convert the entire LADOT fleet to zero-emission buses by 2030.

“We applauded LADOT for its bold leadership, ambition, and desire to improve the air quality for the City of Los Angeles. BYD buses will be an important component of the city’s efforts to meet its sustainability goals. We are proud to partner with an agency that shares our green dream.”

Byd is a pioneer in the electric vehicles market, and is the first Company to produce the plug-in hybrid electrified vehicles (PHEVs) on a mass scale. The Company’s mission is to create a complete, clean-energy ecosystem with minimal reliance on petroleum. Byd is a world leader in numerous sectors such as battery-electric automobiles, buses, medium- and heavy-duty trucks and forklifts, taxi fleet vehicle ; the SkyRail monorail system; solar power generation and energy storage systems; and consumer electronics.