Can Cara Therapeutics buck the trend? 28 May Can Cara Therapeutics buck the trend? 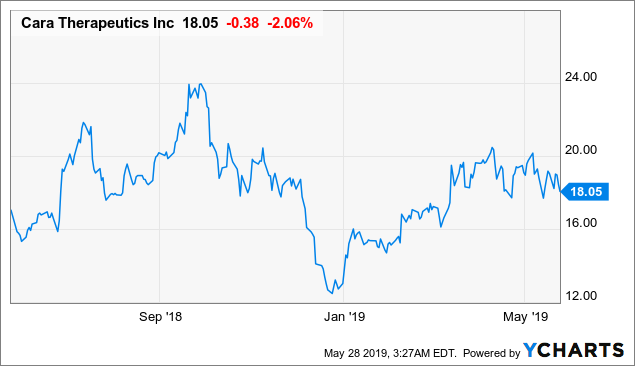 The pruritis drug space offers immense potential as there are no FDA approved therapies, however previous attempts at developing Kappa agonist based therapeutics have failed, which is a major cause for concern, especially since the company’s pipeline is solely focused on CR845/ difelikefalin, which is extremely risky. While a successful completion of clinical trials will bolster its revenues and earnings, any delay or failure to meet clinical end points in the trial will adversely affect the company. Itching is a natural response that is meant to protect the body from harmful objects in the environment such as insect bites. However, it can also occur due to an underlying medical condition and in some cases lasts for more than 6 weeks, leading to it being characterized as a chronic ailment.

Pruritus is characterized by an uncomfortable and persistent urge to scratch, caused either due to a skin disorder or an underlying systemic disease, such as atopic dermatitis, mycoses, chickenpox, hepatitis, Jaundice, chronic renal failure, cholestasis or NASH. These can be chronic in nature and affect the quality of life of those suffering from it.

The global market for pruritus therapeutics stood at USD 11.09 billion in 2018 and is likely to grow at a CAGR of 6.2% to reach USD 17.99 billion 2026 according to a report by reports and data. The growing incidences of skin ailments, upcoming patent expiration, increasing regulatory support, strategic mergers, partnerships and collaborations between key players are likely to drive the growth in the market.

The first line of treatment for pruritis is the prescription of skin ‘emollients’ (moisturizers) and anti-itch creams, that may offer relief, in case the itching is simply caused due to dry skin.

The use of the above treatment options come with their own set of adverse side-effects, such as shortness of breath, dry mouth, blurred vision, erythmea, wheezing, allergic reactions or a rash. The discovery of small molecules, TRP Channel Antagonists, peptide based treatments are some of the novel innovations that seek to address the unmet needs in this area.

It is a clinical stage biotechnology company, focused on developing new chemical entities that target the body’s peripheral kappa opioid receptors, to address unmet medical needs for patients suffering from pruritus and chronic pain. Its most advanced compound CR845, which is under phase III clinical trials currently, is the first peripherally acting kappa opioid receptor agonist (KORA). The degree of kappa receptor selectivity displayed by CR845 ranks as best-in-class compared to all other previously developed compounds for this therapeutic target as per the company’s claims. CR845 exhibits potent analgesic, anti-inflammatory and anti-pruritic (anti-itch) properties in both human and animals with minimal side effects. CR845 is being studied in a Phase 2 trial for uremic pruritus, a severe itch that develops in upwards of 60-70% of dialysis patients. It has shown promising results in various phase II trials for the treatment of acute postoperative pain, chronic pain and pruritis. CR845 is inherently poor at penetrating the blood-brain barrier and hence it produces no or minimal side–effects, unlike conventional mu opioids. In addition, an oral formulation of CR845 is being evaluated in a Phase 2b study in osteoarthritis patients. The company plans to broaden the pruritus program for Oral KORSUVA, with the initiation of Phase 2 trials in chronic liver disease and atopic dermatitis in 2019. The company has licensing agreements with Maruishi Pharmaceutical Co., Ltd. (Maruishi), to develop, manufacture and commercialize drug products containing CR845/difelikefalin in the Japanese market. It has a licensing agreement with Chong Kun Dang Pharmaceutical Corporation (CKDP) (185750.KS), for the South Korean market. The company aims to develop and capitalize on its novel and first-in-class portfolio of peripherally acting kappa opioid receptor agonist KORSUVA (CR845/difelikefalin) injection and Oral KORSUVA (CR845/difelikefalin).

We believe that like all clinical stage biotechnology companies, CARA therapeutics will be a very risky proposition, until it successfully meets the objectives of its Phase III clinical trials. Most of its candidates are still in Phase II or early Phase III stages; hence it is still too early to talk about its long term prospects with certainty.

Another challenge that the company faces is the lack of a solid partnership, which is extremely crucial for clinical-stage biotechnology companies that operate in the “Orphan Drug” space, due to their lack of marketing or delivery resources when compared to the big pharmaceutical companies. Though the company has entered into distribution deals for Korsuva for the markets in Japan, South Korea and worldwide, it is yet to land a deal for the U.S.

It received a $50 million distribution deal from Fresenius (NYSE: FMS), a German company, with up to an additional $470 million in milestone payments for the ex-U.S rights for Korsuva. It also picked up a $20 million ownership stake in Cara Therapeutics. This move could serve as a vote of confidence for the company’s potential, however it still boils down to the successful completion of the crucial Phase III trials of its Korsuva, which seems fraught with uncertainty.

Cara Therapeutics is a clinical stage biopharmaceutical company that is focused on creating innovation solutions for the treatment of inflammation, pruritis and pain. Its aim is to develop novel chemical entities that can treat acute and chronic pain. Its lead candidate selectively targets the body’s peripheral kappa opioid receptors. It unique approach has demonstrated efficacy in treating patients with moderate-to-severe pain and pruritus (itch) without any of the side effects that are characteristic of conventional treatment options.

The company’s approach of using the kappa receptor helps eliminate the undesirable effects experienced by use of mu and delta opioid receptor-based medicine, such as nausea/vomiting, sedation, respiratory depression and the potential for abuse. If approved, CR845 will be the first-in-class kappa opioid receptor agonist (KORA). The company was founded in 2004 and is headquartered at Stamford, Connecticut.