Canopy Growth Unveils Cannabis 2.0 in Canada and a New CBD Line for the U.S Market 05 Dec Canopy Growth Unveils Cannabis 2.0 in Canada and a New CBD Line for the U.S Market

Canopy Growth (NYSE: CGC), a Canadian cannabis behemoth, announced the launch of a new hemp-derived CBD line for the American market under the brand name “First and Free”, for sale in 31 U.S States where sale of CBD products are legal. This comes on heels of the launch of its ambitious Cannabis 2.0 portfolio that comprises of a range of 13 cannabis-infused drinks and a line of cannabis-infused chocolates. The move will enable it to capitalize on the phase 2 legalization of C.B.D, and T.H.C.-infused drinks and edibles that came into effect recently.

The Company is slowly but steadily making a foray into the U.S Cannabis space, which started with the unveiling of its $150 million, 308,000-square-foot facility hemp industrial park in Kirkwood in July 2019. This marked its first step into the hemp sector and its official entry into the U.S. Canopy has plans to open its hemp processing facilities in seven U.S states.

Earlier this year, Canopy Growth entered into a definitive agreement with Acreage Holdings (OTCQX: ACRGF), that bestows it with the right to acquire 100 percent of the company’s shares at such time as cannabis production and sale becomes federally legal in the United States, subject to shareholder approval.

The deal will enable Canopy to secure an entrance into the US cannabis market once it is legalized. The formidable management team, licenses and assets of Acreage when combined with Canopy’s intellectual property and brand value are expected to create a remarkable shareholder value.

“Our hemp operations are now completing. We have the contract manufacturers in place. We have actual manufacturing underway… We have probably around 100 people in the U.S. now and a lot of head office resources going towards that. Like all things cannabis, nothing is easy. The conversations with retailers aren’t easy. The basics of setting up an online store are more challenging than selling a widget”

The apprehension in the above statement seems well founded, considering Apple just removed 181 apps related to vaping from its App Store, that were used for controlling the lighting and temperature in the vape products. Furthermore the Company revised its App Store guidelines to discourage the sale, assistance or promotion of any products through these apps.

Canopy Growth termed Apple’s decision as a knee-Jerk reaction, as it will have an impact on the Company’s recently launched vaping, edibles, and beverage products line, especially since patients will no longer be able to control their devices using these apps. The Company claims that its products come with a app-based passcode lock that enable customers to disable the device and control the location and temperature, which will now become defunct affecting the products demand. 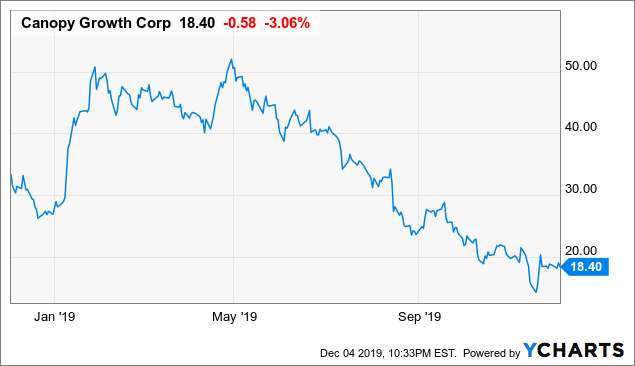 CBD on the other hand, has several powerful anti-inflammatory, analgesic, neuroprotective and anti-anxiety properties, which explains its growing popularity to treat a plethora of medical conditions. Unlike THC, CBD does not have any psychotropic effects and hence is widely preferred. It is increasingly being used to treat conditions such as cancer, cardiovascular anomalies, arthritis, anxiety, depression and Insomnia. In addition it has also been proven to possess neuroprotective benefits that can treat diseases such as seizures, Multiple Sclerosis (MS), Alzheimer’s, Parkinson’s and Schizophrenia to name a few.

Canopy has been eyeing the U.S market for a while now; it is backed by a $4 billion investment from Constellation Brands (NYSE: STZ) and through them gained a license from the New York State to process and produce hemp and develop products containing Cannabinoid (CBD). The deal with Acreage however could be a game changer. Once the acquisition goes through, it will give rise to the largest Cannabis player in the market.

Canopy’s deal with Acreage involves an upfront US$300 million or approximately US$2.55 per Acreage Subordinate Voting Share, with the entire transaction being valued at US$3.4 billion, a 41.7% premium over the 30-day volume-weighted average price of Acreage Holdings shares.

The Company is targeting Q4 FY20, for introduction of CDB products related to health and wellness, skin and beauty and pet aides for the U.S market. It will also focus on CBD based medical therapies, using its robust and extensive intellectual rights portfolio, consisting of 110+ patents in application and technology.

The proposal effectively guards Canopy against regulatory uncertainty in the U.S market, with the agreement only being finalized when Marijuana is fully legalised. It also allows the company to acquire a storing foothold in the market at a great price as opposed to once legalization is announced allowing it to make a quicker foray into the market.

In the event of Marijuana being legalized by the end of the year, as some observers predict, the company is fully ready to commence its operations immediately, it is investing in one of the biggest players in the U.S market and hence will be able to leverage on its established chain of dispensaries and licenses. It will gain access to Acreage’s 87 dispensaries and 22 cultivation and processing sites across 20 U.S States.