Collegium Pharmaceutical Carving a Niche in the Pain Management Industry Posted at 12:01h in Biotechnology by admin 0 Comments
2 Likes
Share

Collegium Pharmaceutical (NASDAQ: COLL), a Speciality Pharmaceutical Company focussed on developing novel abuse-deterrent therapeutics for pain relief and management, announced the closing of its acquisition of the Nucynta franchise from Assertio Therapeutics (NASDAQ: ASRT), in consideration for $375.0 million in cash at closing, less royalties paid to Assertio in 2020. The agreement also included payment for certain inventories and equipment.

The Company has also completed the funding of its $200.0 million senior secured term loan from BioPharma Credit PLC, in addition to closing a previously announced underwritten public offering of $143.75 million.

“We are excited to close the Nucynta acquisition, a financially transformative transaction for Collegium. Looking ahead, we expect this transaction will significantly grow EBITDA and operating cash flows, and the financing structure will enable us to pursue future business development transactions that will diversify our portfolio.”

NUCYNTA is an extended-release prescription pain medicine that contains an opioid for treating severe pain, and is indicated for the management of severe short term pain in adults who do not respond well to non-opioidor other opioid-based medicine. Collegium had previously received an exclusive sublicense to commercialize Nucynta and Nucynta ER in the United States, on account of its agreement with Depomed, Inc, which later changed its name to Assertio Pharmaceuticals in August 2018. The Nucynta franchise enjoys patent protection until June 2025 and can avail another 6 months of paediatric extension. 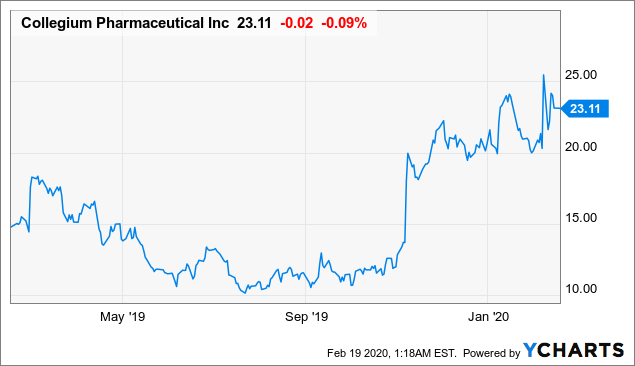 Chronic Pain is the leading cause for seeking medical aid in the U.S.A study undertaken by the Centres for disease control and prevention (CDC) in conjunction with NIH and other entities titled “Morbidity and Mortality Weekly Report (MMWR)”in the year 2016, estimates that 20.4% percent of the adults population in the U.S suffered from chronic pain, while 8 percent had high-impact chronic pain limiting at least one important activity in their daily life. Untreated or undertreated chronic pain contributes to$560 billion each year in direct medical costs, lost productivity, and disability programs in the U.S alone.

The global analgesic market is poised to amass $ 26.4 billion by 2022, growing at a CAGR of 7.1% during 2015 – 2022, according to a report titled “Analgesics Market by Type (Non-opioids, Opioids) and Route of Administration (Oral, Intravenous, Rectal, Transdermal, Topical) – Global Opportunity Analysis and Industry Forecast, 2015 – 2022” published by alliedmarketresearch.

The Analgesic market is broadly divided into Opioid and Non-Opioid therapeutics. Opioid based medicine has given rise to an addiction endemic with prescription drug overdose becoming one of the leading causes of preventable deaths in the U.S in turn prompting the government to declare a public health emergency in 2017.

This has resulted in growth in the non-opioid based drugs segment, with increasing emphasis being laid on research and development in finding non-opioid alternatives to managing chronic pain. According to a study published by BBC research named “Non-opioid Pain Treatment: Global Markets to 2022” the global market for non-opioid pain treatment which was $ 9.9 billion in 2017, is estimated to grow at a CAGR of 18% and reach $ 22.6 billion by 2022.

An increase in the geriatric population along with a rise in life-style related ailments and chronic diseases will drive the growth in the pain management therapeutic markets, along with a favourable government and regulatory environment, increased spending on research and development and fast track approvals for breakthroughs.

On November 8, 2018, Collegium entered into an amendment to the Commercialization Agreement with Assertio Therapeutics (formerly Depomed) related to the Nucynta franchise wherein it removed the $135.0 million guaranteed annual minimum royalty obligation in future years, which was expected to significantly reduce liabilities on Collegiums balance sheet and enables a tax efficient structure. However, with the complete acquisition of the Nucynta franchise will result in a significant improvement in the Company’s EBITDA and considerable cost saving.

“In 2020, Xtampza ER is well-positioned for the next stage of growth driven by the 15 new exclusive extended-release oxycodone formulary wins covering more than 35 million lives that took effect on January 1, 2020. Xtampza ER growth, as well as a commitment to leverage our existing cost structure, will drive Collegium to profitability in 2020.”