Cyclerion Therapeutics (NASDAQ: CYCN), a clinical-stage Company, announced the failure of its drug candidate praliciguat in meeting the primary endpoints in two separate clinical studies, in diabetic nephropathy (DN) and heart failure with preserved ejection fraction (HFpEF). Praliciguat is a soluble guanylate cyclase (sGC) stimulator indicated for the treatment of cardiometabolic diseases, which was granted a Fast Track Designation by the U.S FDA for the treatment of HFpEF. In preclinical studies, the drug demonstrated extensive distribution to adipose tissue, kidney, heart and liver.

As per a Company statement, the study did not achieve statistical significance on its primary endpoint of reduction in albuminuria from baseline as compared to placebo, measured by urine albumin creatinine ratio (UACR). However an improvement was observed in the total intention-to-treat (ITT) study population, besides improvements in secondary vascular and metabolic measures associated with cardiovascular risk and kidney disease progression, including blood pressure, cholesterol and HbA1c levels. The study also revealed a favourable pharmokinectic profile of praliciguat, with the drug being generally well tolerated and safe.

“I am encouraged by the estimated reduction in albuminuria of 15% or more, compared with placebo, on top of current standard of care. This molecule modifies pathways that are complementary to those targeted by usual care, and it warrants further investigation as a potential treatment for patients with diabetic kidney disease”.

The Company intends to out-license praliciguat for late-stage development and commercialization in DN, HFpEF and other cardio metabolic indications, after the completion of its phase 2 studies in DN and HFpEF.

“We believe praliciguat has the potential to be a first-in-category treatment for patients with diabetic nephropathy. We look forward to sharing the data with prospective partners.”

Cyclerion is now planning to focus on its STRONG SCD, a phase 2 study of olinciguat, a sGC stimulant similar to praliciguat, being developed for the treatment of sickle cell disease, the results of which are expected to be announced in mid-2020. In addition the Company is also engaged in a Phase I clinical trial named IW-6463 a central nervous system-penetrant sGC stimulator, the results of which are due in Q4 2019.

The Company has announced its plan to reduce its monthly cash expenses by 25 percent, focus on creating near-term value-creation opportunities such as out-licensing and partnering agreement and layoff 30 of its 135 staffers.

Cyclerion presently has nearly $125 million in cash, cash equivalents and restricted cash as of September 30, 2019, which it believes will be sufficient to fund its ongoing trials and operations until Q1, 2021. 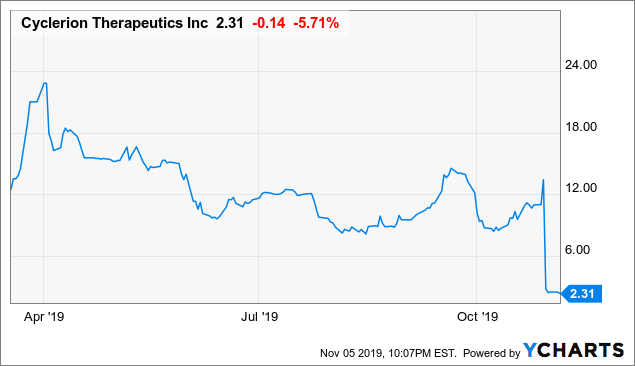 It is estimated that around 25 percent of the people with diabetes eventually develop kidney ailments such as Diabetic Nephropathy and Focal Segmental glomerulosclerosis (FSGS). These diseases hamper the kidney’s ability to function by preventing proper elimination of waste products and fluids from the body. The disease initially manifests in the form of unregulated blood pressure, protein in the urine, swelling, and shortness of breath, nausea, itching and fatigue and can lead to end-stage renal failure if left untreated.

Heart failure with preserved ejection fraction (HFpEF) is a form of heart failure in which the blood ejected from the left ventricle (ejection fraction) is greater than 50 percent, which eventually leads to heart failure. This condition is caused by co-morbidities such as hypertension, diabetes, smoking or sleep apnea. According to an estimate by the American Heart Association, over 6.5 million people suffer from heart failure, with the number likely to reach 8 million by 2030. There are more than 960,000 new diagnoses of HF every year, according to data from the National Health and Nutrition Examination Survey.

The Company is targeting the nitric-oxide signaling, a crucial component of real-time regulation of various biological systems. Soluble guanylate cyclase (sGC) play an important role in regulating Nitric oxide signaling, and is present in  tissues throughout the body, including in the vasculature, kidney, brain, lung, heart, liver, adipose and skeletal muscle. Nitric Oxide produced locally percolates into target cells and binds to sG, which in turn catalyzes the conversion of guanosine – 5’ – triphosphate (GTP) to cyclic guanosine monophosphate (cGMP), effecting a marked improvement in the secondary signaling molecule. Cyclerion’s strategy is to design novel small molecule sGC stimulators, which are capable of increasing nitric oxide signalling in disease-relevant tissues, thereby resulting in improved production of cGMP. The Company has sights on extending the application of this technology in developing therapeutics for diseases associated with inflammation, fibrosis or metabolic dysregulation.

The Company was spun out of Ironwood Pharmaceuticals (NASDAQ: IRWD) in April 2019.