Lexicon Pharmaceuticals (NASDAQ: LXRX), a biopharmaceutical company leveraging its proprietary Genome5000™ program to develop therapeutics for the treatment of disease such as diabetes, metabolism, oncology and neuropathic pain, announced that the Food and Drug Administration (FDA) has reiterated its rejection of the Company’s New Drug Application for sotagliflozin (Zynquista™), an oral dual inhibitor sodium-glucose co-transporter types 1 and 2 (SGLT1 and SGLT2), known to promote glucose regulation and intended for the treatment of Type I diabetes.

The FDA has earlier issued a complete response letter to the Company, owing to concerns about the drug’s safety, as late-stage clinical data showed an eight-fold increase in risk of diabetic ketoacidosis. The drug was a much anticipated alternative to the existing limited treatment options for Type I diabetes, and upon approval would have been the first oral drug used in combination with Insulin in the U.S. The Company had initially filed an application for the drug in March 2018 and was served a complete response letter in March 2019.

The Company intends to appeal the decision to the Center for Drug Evaluation and Research, or CDER, as per a Company Statement. However the chances of a reversal of stance by the FDA appear very slim. The European Medicine Agency’s Committee for Medicinal Products for Human Use (CHMP), on the other hand, has given a green signal for the drugs approval in Europe.

Sotagliflozin (Zynquista™) was jointly being developed by the Company in partnership with Sanofi (NASDAQ: SNY), which later terminated the partnership following the results from the late-stage studies testing Zynquista in patients with type 2 diabetes. As per the initial partnership agreement the Company had received $300 million in upfront payment and was due to receive another $1.4 billion in development, regulatory and sales milestone payments. 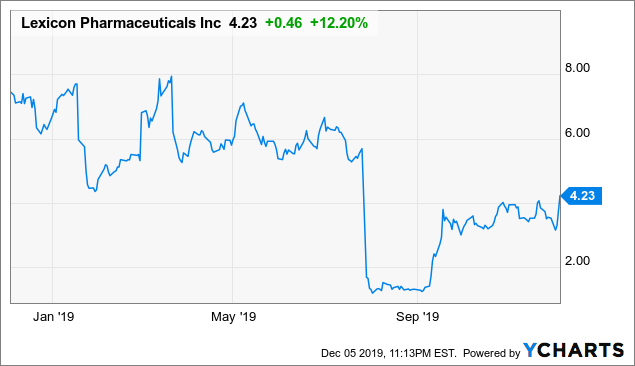 Metformin is the first line of treatment adopted by doctors due to its minimal long-term side-effect profile, while there are other treatment options available such as sulfonylureas (SUs), these are being replaced by therapeutics involving DPP-4Is , GLP-1RAs, SGLT-Is which have a far safer side-effect profile and other benefits such as improved cardio vascular health, weight loss etc. The industry has a huge unmet potential for novel patented products that can overcome the limitations of existing therapeutics options.

Lexicon Pharmaceuticals leverages its proprietary Genome5000™ program, based on a Nobel Prize winning technology, to develop therapeutics for chronic conditions. Using a systematic approach, the Company has generated over 100 protein targets that exhibit significant potential in numerous diseases.

The Company manufactures XERMELO, which is a first-in-class oral therapeutic for Carcinoid Syndrome Diarrhoea, indicated to be used along with Somatostatin analog (SSA) therapy in adult patients who are not adequately controlled by SSA therapy. Lexicon is primarily focussed on four most advanced drug programs namely Telotristat ethyl, indicated  for the treatment of biliary tract cancer; Zynquista™ (sotagliflozin),approved in the European Union for type 1 diabetes; Sotagliflozin, for type 1 and type 2 diabetes; LX2761, for treatment of diabetes; and LX9211, for treatment of neuropathic pain, as per the Company. Lexicon has established strategic collaborations with Ipsen (OTCPINK: IPSEF), granting it an exclusive, royalty-bearing right and license to commercialize XERMELO outside of the United States, Canada and Japan, in exchange for $24.5 million in upfront payments and $20.5 million in regulatory and commercial launch milestones, besides another $11.8 million upon the achievement of additional specified regulatory and commercial launch milestones and up to €72 million upon the achievement of specified sales milestones as per the Company.

In addition the Company also has agreements with Bristol–Myers Squibb (NYSE: BMY) for LX9211 and Genentech for advanced research, development and commercialization of new biotherapeutic drugs.

Recently the Company reported positive topline data from a phase I study of LX9211, a potent oral small molecule inhibitor of adaptor associated kinase 1 (AAK1), in development for the treatment of neuropathic pain.

- Three Cheers for the Most Promising Cannabis-Infused Beverages!