Four companies with potential to disrupt the Huntington Therapeutic Space Huntington’s disease is a progressive degeneration of the neurons in the brain resulting in loss of cognition, motor ability, uncontrolled movements and emotional distress. The disease can be categorized into adult onset, which manifests in the form of depression, irritability, lack of coordination and poor decision making skills. The disease is characterized by chorea, involuntary jerking or twitching movements, which become progressively worse, with patients having a life span of around 15-20 years after onset.

The Juvenile form of the disease is less common, and develops usually in childhood or adolescence, marked by symptoms such as frequent falling, slurred speech, and rigidity in movements and drooling. In addition, cognitive decline hampers academic and social performance. This form of the disease progresses more quickly with a life span of just 10-15 years from the onset of symptoms.

According to an estimate by the NIH the disease affects an estimated 3 to 7 per 100,000 people of European ancestry and is primarily caused by a mutation in the HTT gene that is responsible for providing clear instructions for making the huntingtin protein. The malfunctioning of the gene involves a DNA segment known as CAG trinucleotide repeat, the increase in the size of which leads to production of abnormally long version of the huntingtin protein. The abnormal binding and accumulation of the protein results in the dysfunction and death of neurons in the brain.

The disease is inherited in an autosomal dominant pattern, which makes one copy of the altered gene in either parent, sufficient for the child to inherit this disorder.  The disease is diagnosed through genetic testing and has no cure at present. The treatment options aim at alleviating the symptoms. Teva pharmaceuticals (NYSE: TEVA) Austedo and Bausch Health’s (NYSE: BHC) Xenazine are the only two marketed drugs for the treatment of Huntington’s.

There are numerous candidates under clinical development which are using novel approaches such as lysosomal cysteine transporter, Huntington, SIRT1, vasopressin receptors, semaphorin 4D/CD100, aryl hydrocarbon receptor, phosphodiesterase 10a, PPAR delta, and PPAR gamma according to a report by ResearchandMarkets. According to a report by Grand View Research Inc, the global Huntington’s disease market is expected to be worth over USD 1.5 billion by 2023, growing at a CAGR of 38.2% during the forecast period. 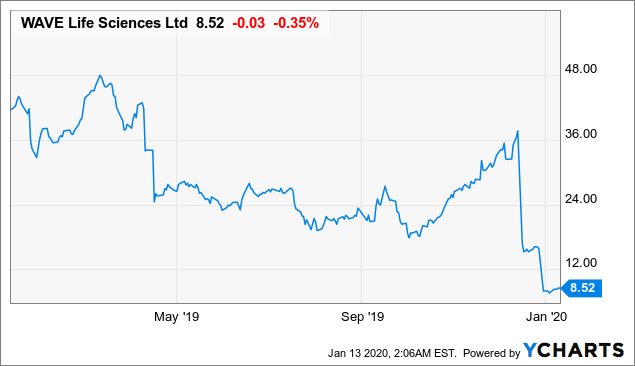 Wave Life Sciences is taking the oligonucleotide approach to creating nucleic acid based therapeutics, for the treatment of rare genetic diseases, such as Huntington’s disease, amyotrophic lateral sclerosis and frontotemporal dementia. The Company’s proprietary platform can chemically modify short-length RNA or DNA strands to alter the production of disease-causing proteins and inhibit degradation of oligonucleotides by changing their natural phosphate backbone to phosphorothioates, by replacing a non-bridging oxygen atom with a sulphur atom. Its chemistry platform allows for the design, manufacturing and optimization of stereopure oligonucleotides.

The technology enables the company to create medicines with improved safety profiles, stability and far greater pharmacological properties, which have a wide applicability across platforms such as Antisense, Exon Skipping, Splice Correction, RNAi and MicroRNA. The company has a scalable in-house cGMP manufacturing unit in Lexington, Massachusetts, which helps it regulate the development and supply of its products.

The Company recently, announced topline data from an ongoing Phase 1b/2a PRECISION-HD2 trial evaluating the safety and efficacy of WVE-120102, a first-in-class allele-selective approach to treat Huntington’s disease (HD). The study shows that patients treated with multiple intrathecal doses of WVE-120102, when compared to a placebo, demonstrated a statistically significant reduction of 12.4% in mutant huntingtin (mHTT) protein in cerebrospinal fluid (CSF). However, there was no statistically significant reduction in mutant huntingtin (mHTT) in those treated with WVE-120102 as compared to a placebo.

WVE-120102, is an allele-selective molecule, which targets two disease-associated single nucleotide polymorphisms (“SNPs”) within the huntingtin gene, namely rs362307 (“mHTT SNP-1”) and rs362331 (“mHTT SNP-2”), to reduce the production of the disease causing protein, while leaving the wild-type (healthy) HTT protein unaffected. Wave will now initiate a 32 mg cohort in January 2020. The Company is using an assay developed by the CHDI Foundation, a not-for-profit biomedical research organization, to measure total HTT (tHTT) protein and its affect on wtHTT.

Wave has global 50:50 co-development and co-commercialization profit share collaboration with Takeda Pharmaceuticals for developing therapies for the treatment of central nervous system (CNS) disorders. It has partnered with Pfizer for developing therapeutics for debilitating metabolic diseases by combining its stereopure platform, across antisense and RNAi modalities, with GalNAc and Pfizer’s hepatic targeting technology. In addition it has a tie-up with ReadCoor for developing stereochemistry in optimizing silencing and splicing therapies in the brain.

MMJ Group Holdings Ltd is focussed on developing FDA approve Cannabis medicines, which address the needs of an underserved patient population, by leveraging its expertise in genomics and information technology. The Company received an Orphan Drug Designation from the FDA, for its THC and CBD proprietary drug formulation, intended for the treatment of Huntington disease. MMJ is playing a pioneering role in the development of plant-based cannabinoid therapeutics using its drug discovery and development processes, intellectual property portfolio and regulatory and manufacturing expertise.

The Company is engaged in developing several prescription medicines from the cannabis plants to treat conditions like spasticity and chorea due to multiple sclerosis and Huntington’s disease. Its pipeline has multiple clinical-stage cannabinoid and other natural product candidates, derived from plants, for neurological conditions, falling under both orphan and non-orphan indications. The Company has a pharma-grade, fully integrated supply chain that can produce controlled medicine.

MMJ is currently in preparation for the launch of its first clinical trial involving a gel cap formulation with two principal cannabinoid components, cannabidiol (CBD) and delta-9 tetrahydrocannabinol (THC). The Company is collaborating with leading cannabinoid scientists worldwide, to test the potential of numerous novel cannabinoid and other botanical molecules in varied therapeutic areas. 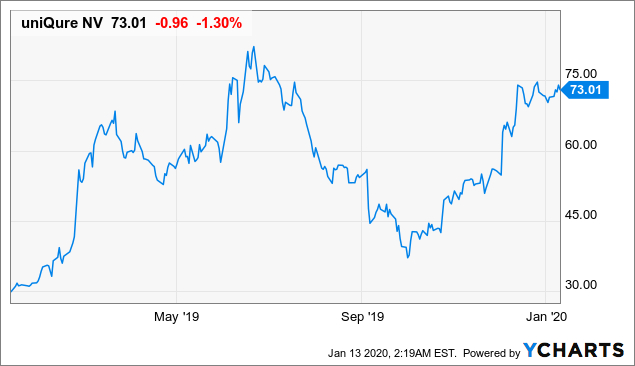 AMT-130, an AAV5 vector carrying an artificial micro-RNA, capable of silencing the Huntington gene developed using the Company’s proprietary miQURE™ silencing technology, is uniQure’s gene therapy product candidate, intended for the treatment of Huntington Disease. The candidate aims to inhibit the production of mHTT, the mutant Huntingtin protein. Their highly innovative approach of using AAV vectors to deliver micro-RNAs directly to the brain, offers a promising treatment approach for this highly debilitating disease.

The Company presented 12-month follow-up data in Huntington’s disease derived from the largest available animal minipig model, which demonstrated the ability of AMT-130 to achieve a dose-dependant and sustained reduction of mutant huntingtin protein (mHTT), through a single administration of AMT-130. The affects were even noted to spread and reach the striatum and the putamen and cortex, and lower the mHTT in the frontal areas of the brain, the primary areas that undergo neuropathological changes due to the disease. AMT-130 has also proven to cause a  significant knock-down of mHTT, determined through a non-invasive technique named Magnetic Resonance Spectroscopy (MRS) and results in an improvement in brain cell function, a reversal in HD neuropathology, and a partial reversal of volume loss in the hippocampus as per the Company. The candidate possesses certain unique capabilities such as targeting the deep brain structures, the ability to silence mutant huntingtin protein at levels not demonstrated in other studies and target the accumulation of the exon 1 HTT fragment, known to be the most toxic source of abnormal protein aggregation in Huntington’s disease.

The Candidate has received an orphan drug designation from the FDA and an Orphan Medicinal Product Designation (OMPD) from the European Medicines Agency, along with a Fast Track designation from the FDA. The FDA has reviewed its Investigational New Drug (IND) application allowing the Company to plan for a Phase I/II study, which will make it the first one-time administered AAV gene therapy to enter clinical testing.

The Company is also developing innovative gene therapies for treatment of Liver diseases such as Hemophilia, Fabry Disease and Central Nervous system diseases like SCA Type 3 and certain other indications.

The Company develops intrabodies for the treatment of neurodegenerative diseases, leveraging its proprietary antibody technologies to address unmet medical needs. Vybion adopts a disease modifying approach to therapeutics, specifically creating Intrabodies which are scFv fragments and capable of changing intracellular events like the protein aggregation, gene dysregulation and turnover of toxic protein fragments. The Company’s lead candidate for the treatment of Huntington is INT41, an intrabody delivered through an AAV and capable of blocking gene dysregulation and the toxic Huntingtin mutant protein fragments in the nucleus. The Company’s proprietary ProCode, uses a transport and detection capability that self edits and eliminates aggregation, proving an unbeatable antibody aggregation elimination capability when compared to competitors. Vybion has received an orphan drug designation for INT41, the Company’s Intrabody delivered with AAV for the treatment of Huntington’s disease from the FDA.

The Company is planning to complete its IND enabling studies in 2019 and 2020, and file for an Investigational New Drug (IND), seeking approval to move forward with human clinical trials as per a Company statement.