G1 Therapeutics stock soars on news of NDA for Triaciclib G1 Therapeutics (NASDAQ: GTHX) shares soared by almost 25% on the basis of news that it had a productive phase 2 meeting with the FDA for the company’s lead candidate Trilaciclib, a first-in-class myelopreservation agent that protects the bone marrow from damage by chemotherapy. The company is now planning to request for a pre-NDA meeting with the FDA, a precursor to filing an Investigational New Drug Application (NDA) later this year.

The drug has the potential to be extended to numerous other areas of cancer treatment as it not only offers myelopreservation (preservation of the bone marrow) but also enhances the functioning of the immune system, a key in therapeutics being developed using immunotherapy and checkpoint inhibitors. 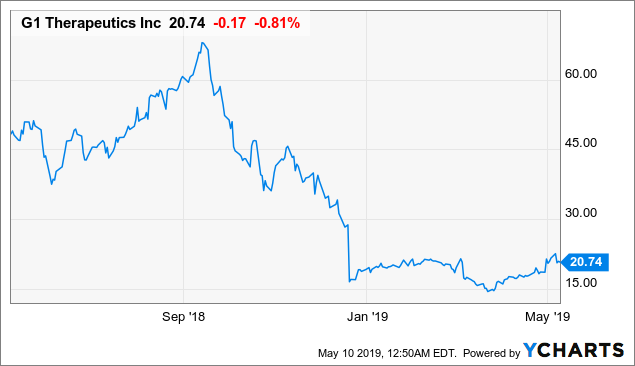 The treatment options for cancer depend on numerous factors such as the type of cancer and the part of the body that is affected. Depending upon the nature of the disease, the treatment can either be limited to one option or can be a combination of various therapies.

Treatment options primarily include surgery, chemotherapy and radiation therapy, along with new-age options such as immunotherapies, stem cell transplant, targeted therapies and hormone therapy to name a few. Chemotherapy is one of the most common treatments prescribed for a whole gamut of cancers, but comes with adverse affects. It cannot differentiate between healthy and diseased cells, in the process destroying healthy cells and causing side effects such as damaging cells that line the mouth and intestines and those responsible for hair growth.

Mylosupression is one of the major concerns associated with cancer treatments such as chemotherapy. It is characterized by a decrease in bone marrow activity leading to production of fewer red blood cells (anemia), white blood cells (leukopenia), and platelets (thrombocytopenia). In severe cases, it takes the form of myeloablation and can prove to be fatal.

Another side-effect of mylosupression is pancytopenia, which results in lack of oxygen supply and compromising the body’s immunity, and is caused by a decrease in all the three types of blood cells simultaneously. Besides chemotherapy being the most probable cause, there are other reasons for developing this condition such as use of medication that suppresses production of blood cells, bone marrow failure, and cancers such as leukemias, lymphomas, myeloma, and nutritional deficiencies.

The symptoms of mylosupression depend on the type of blood cells affected and the severity of the condition, but most commonly include dizziness, shortness of breath and chronic fatigue. In addition, anemia increased susceptibility to infections, bleeding gums and nose bleeds can also be experienced by those suffering from the condition.

In case of mild mylosuporession, no treatment in undertaken, however the treatment of severe mylosupression results in chemotherapy being stopped immediately, to restore the production of red blood cells, and can hamper the progression of the treatment and result in poor outcomes.

In case of mylosupression caused by a failure of the bone marrow, a transplant or transfusion may be advised. Another alternative is the use of growth factor injections to increase the production of blood cells.

However, these treatment options put the patients through additional inconvenience and suffering and expose them to additional complications such as transfusion related immunosuppression, increased risk of bacterial and viral infections and febrile, nonhemolytic transfusion reactions. Another disadvantage is that multitransfused patients become refractory to subsequent infusions adding to the list of complications.

In clinical trials, the drug has demonstrated the ability to protect bone marrow from chemotherapy damage, and has shown a significant reduction in supportive care interventions such as G-CSF and transfusions. Based on the currently available data from three randomized, double-blind, placebo-controlled SCLC clinical trials, the company intends to file for a New Drug Application (NDA) in 2020 with the FDA and a Marketing Authorization Application (MAA) with the European Medicines Agency (EMA) subsequently.

Trilaciclib is the need-of-the hour especially for those who are unable to fully benefit from chemotherapy owing to mylosupression. It adopts a proactive approach, by protecting the bone marrow before any damage can take place, thereby eliminating the need for further treatment to combat the side-effects caused by this condition.

In addition, to trilacilclib, it is also developing lerocliclib, a differentiated oral CDK4/6 inhibitor intended for use in combination with other targeted therapies in multiple oncology indications. It is currently undergoing Phase 1/2 clinical trials: a trial in combination with Faslodex® for patients with ER+, HER2- breast cancer (NCT02983071) and a trial in combination with Tagrisso® (osimertinib) in EGFRm non-small cell lung cancer (NCT03455829). Another candidate under development, G1T48, is a potential best-in-class oral selective estrogen receptor degrader (SERD) that has shown to be more potent than Faslodex® (fulvestrant) and to have superior anti-tumor efficacy versus other SERDs in development. It is currently undergoing a Phase 1/2a trial of G1T48 in estrogen receptor-positive, HER2-negative (ER+, HER2-) breast cancer, the preliminary proof of concept results of which are expected in Q4, 2019. We believe that there is a huge potential for this drug in the Oncology market considering that myelosupression can act as an impediment for patients undergoing chemotherapy and results in poor outcomes. The positive results from its clinical trials as well as its meeting with the FDA augur well for the Company; however the Pre-NDA meeting will be very crucial as to what direction G1 Therapeutics is likely to head next. It has plans for filing a New Drug Application in 2020 along with a Marketing Authorization Application (MAA) to the European Union for approval of the drug as well but these are heavily dependent on the outcome of its pre-NDA meeting with the FDA.

Financially the company had cash and cash equivalents of an estimated $369.3 million as of December 31, 2018, including proceeds from a public offering of 3.45 million shares of its common stock at a price of $60 per share amounting to $194.9 million, which the company believes is sufficient to fund its clinical trials and operations until the end of 2019.

G1 Therapeutics is a clinical stage oncology company that is leveraging its deep understanding of the biology of cyclin-dependent kinases (CDKs) and clinical development experience to create novel solutions for oncology indications. Its focus is on the discovery, development, and commercialization of novel small molecule therapeutics for various oncological indications. The company was founded in 2008 and is headquartered in Research Triangle Park, North Carolina. - Will Zovio Succeed with its Realigned Focus on Higher Education Delivery?