Posted at 18:30h in Biotechnology by admin 0 Comments
0 Likes
Share

Sarepta Therapeutics (NASDAQ: SRPT) faced a setback recently with the FDA rejecting Vyondys 53 (Golodirsen), an experimental drug for Duchenne muscular dystrophy, which targets over 8% of the DMD patients with a rare genetic mutation. The company was issued a Complete Response Letter (CRL), which cited risk of infection for intravenous infusion ports and renal toxicity as the reasons for rejection. This means that Sarepta, which was on the verge of commercializing the drug, will now has to conduct additional trials to alleviate safety and efficacy concerns, a process that will take another 2 years in the least. 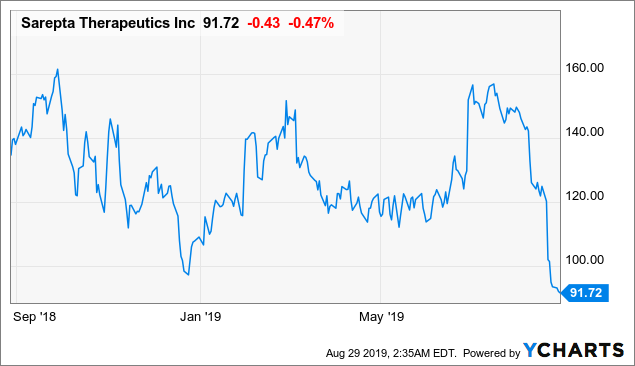 In Feb 2019, the FDA had accepted Sarepta’s new drug application for Vyondys 53 (Golodirsen – SRP-4053) for Patients with Duchenne Muscular Dystrophy amenable to Skipping EXON 53 and had set a PDUFA date of August 19th, 2019. The company was anticipating a go-ahead from the FDA, based on the approval of its previous drug for DMD in 2016. The data from the drugs clinical trials, which had previously received an Orphan Drug Designation, making it eligible to receive priority guidance and redressal for any issues from the FDA, was not met with any concerns prior to being served the CRL.

According to Doug Ingram, the CEO of the Company,

“Over the entire course of its review, the agency did not raise any issues suggesting the non-approvability of golodirsen, including the issues that formed the basis of the complete response letter”

The FDA had previously approved Sarepta’s EXONDYS 51®, an eteplirsen injection that relies on EXON 51 skipping in the dystrophin pre-mRNA, which leads to synthesis of dystrophin protein, a decision which was marred with controversy and efficacy concerns. The regulatory approval for Exondy’s came under scanner, for the manner in which concerns regarding its efficacy by FDA Regulators were overruled by then head of the FDA’s Center for Drug Evaluation and Research (CDER), Janet Woodcock. The review committee felt that though Exondys increased the amount of dystrophin protein, it was insufficient to prove to be of any clinical significance and may not be really beneficial as being claimed.

There were also concerns about the very small sample size used for the study, with just 12 patients being enrolled for safety and efficacy trials. The company was also criticised for poor design of the trail and choosing to publish selective data during the entire process. There were no placebo-controlled trials conducted for both these drugs, a deviation from the traditional norms.

There were numerous allegations of deviating from standard protocols and procedures for approving the drug, which many feared, was setting a bad precedent for other Pharma companies to misuse the priority approval process. The criticism led to the FDA asking Sarepta for additional data, the results of which are still expected, as the company is yet to launch a phase 4 clinical trial. Meanwhile the company’s revenues have soared to $94.7 million in Q2, 2019, an increase of 29% over the last year, mainly on account of sales of Exondys.

As per a company statement, Golodirsen is being studied in an ongoing global, randomized double-blind, placebo-controlled ESSENCE study (4045-301), to assess the safety and efficacy of golodirsen and casimersen, an EXON 45 skipping agent. The ESSENCE study could possibly serve as a post-marketing confirmatory study as confirmed by the FDA. The company is conducting these tests on 24 patients, again a very small subject size.

In addition, its pipeline consists of casimersen, which is up for a FDA review and skips (SRP-4045) EXON 45. The company may now be compelled to take a closer look at the clinical data for renal toxicity. The three drugs together were targeting over 30 percent of the DMD market, with analysts predicting sales to the tune of $1.7 billion by 2024 for the company. These figures and expectations will have to be now readjusted to reflect the current situation.

Researchers have identified the lack of dystrophin, a protein that helps regulate the functioning of membrane (sarcolemma) of muscle cells as the cause of this disorder. EXON skipping is gaining credence as a potential treatment approach to correct for specific genetic mutations and restore production of dystrophin protein, with an increasing number of companies coming up with first-in-class therapeutics based on this approach.

However the emergence of new mechanisms of action such as NF-κB inhibition, Gene therapy, and Exosome technology can redefine the therapeutic industry and many companies are engaged in the quest for a cure for this disorder. Clinical Trials are fraught with risk and uncertainty, and as demonstrated in this case, need a lot of careful consideration of factors such as study design, optimal subject sample and transparency to make an impact and be accepted. Sarepta could have taken the challenges it faced with the regulatory approval of Exondys, and used the feedback to improve its chances of getting a nod for Vyondys, but it failed to do so.

A recommendation report by Institute for Clinical and Economic Review, states there is very little evidence to suggest that EXON-skipping agents were superior to treatment with corticosteroids and supportive care. This raises pertinent questions about the companies approach and focus on EXON- skipping therapy.

There are few who are questioning the approach of FDA, in providing a CRL for renal toxicity by using a 10X dosage as a test parameter, on the basis of anomalies detected in preclinical trials, a move previously unheard of.

The company has called for a meeting with the FDA team to discuss its future course of action for Vyondys, and may well be compelled into providing the additional data required for the clearance of Exondys as well, to allay concerns about the safety and efficacy of the product.

Exondys is a major revenue source for Sarepta, with over $94.7 million in revenues, a 29% growth quarter over same quarter last year. If the drug were to be recalled, on account of failure to provide additional information by the company, as requested by the FDA, then it would prove to be extremely challenging for Sarepta.

The company has a robust pipeline of drug candidates for treatment of Limb-Girdle Muscular Dystrophy (LGMD) 2A program, in addition to gene therapies for cardiomyopathy, Rett Syndrome, Emery-Dreifuss muscular dystrophy (Type 1) and Multiple Sclerosis, these could help the company recover from this setback and start generating revenues.

We believe that Sarepta has the ability and wherewithal to overcome this temporary setback and emerge stronger for the experience.