Stock took a beating despite of positive news, here’s why! 30 May Stock took a beating despite of positive news, here’s why!

Posted at 12:27h in Technologies by admin 0 Comments
0 Likes
Share

Shares of Maxar Technologies (NYSE: MAXR) rose by almost 28% on May 23, before plunging 10%, summing up what turned out to be a rollercoaster week for its stock. The jump in the stock was due to the news that it was chosen to build and perform a spaceflight demonstration of the lunar Gateway’s power and propulsion element spacecraft by the National Aeronautics and Space Administration (NASA). 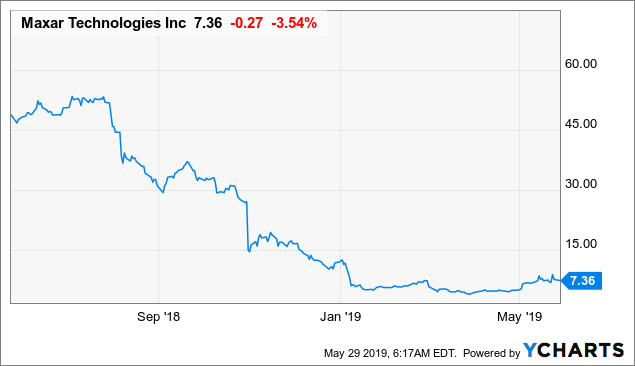 The company will partner with Blue Origin and Draper, privately funded aerospace manufacturers and sub-orbital spaceflight service companies to design, execute and demonstrate the feasibility of a spacecraft that can help American Astronauts land on the surface of the moon by 2024.

The firm-fixed price award for a maximum total value of $375 million includes an indefinite-delivery /indefinite-quantity stipulation. NASA will acquire the spacecraft to be used as the first element of the Gateway, upon a successful demonstration period of up to one-year. It was also the recipient of a follow-on contract valued at $4.3 million by the U.S. Defense Advanced Research Projects Agency (DARPA) to test its Geospatial Cloud Analytics (GCA) Hub. Maxar, built a secure, cloud-based GCA Hub on the foundations of its Geospatial Big Data (GBDX) platform as part of the first GCA Hub contract in 2018.

It also won the 2019 Americas Region Most Innovative Supplier Award from HERE Technologies, a pioneer in mapping and location platform services, in addition to being awarded a contract for the global production of HERE’s in-car navigation maps.

All exceedingly positive news, but why is the reaction of the market so subdued then?

The shares of the company have spiraled downwards by almost 82% in 52 weeks, in spite of these positive developments. We take a look at some of the factors which may have contributed to this.

The company reported a lower than expected Q1 revenue in May 2019, primarily due to poor geostationary communication satellite sales, the company has not booked any new orders so far in 2019. Its Worldview-4 high-resolution imaging satellite experienced a malfunctioning of its control moment gyros, with no chance of a recovery. Though it received an insurance payout amounting to $153.3 million out of $183 million spent on the Worldview-4 high-resolution imaging satellite, with further payments expected by the end of the quarter, the failure was a setback for the company as it caused a loss of precious revenue that could have been used to offset its debt. In January 2019, the company terminated its contract with the U.S. Defense Advanced Research Projects Agency (DARPA) for the Robotic Servicing of Geosynchronous Satellites (RSGS) program awarded to its subsidiary SSL. The company stated that “this decision is consistent with Maxar’s commitment to disciplined prioritization of capital. Maxar remains confident in the potential of the on-orbit servicing market and the value of public private partnerships. SSL will also be terminating its associated contract with Space Infrastructure Services LLC, which SSL was awarded in June 2017 to develop a servicing spacecraft vehicle for the RSGS program.” This led to fuelling concerns that the company is stretching its resources extremely thin and has too much on its plate, which is why it walked away from this deal.

Maxar has over $3.18 billion in debt, a cause for concern, which reflects in the efforts by the company leadership to reduce it substantially. It announced a tax benefit preservation plan that aims to safeguard its tax attributes, and the value of its net operating losses, by issuing preferred-stock purchase rights to its shareholders. This would allow them to buy its stock in the event of a takeover attempt, which will not only dilute any ownership claims but also prevent the loss of approximately $890 million and $77 million, in accumulated “U.S. federal net operating loss carryforwards and federal R&D tax credit carryforwards”.

Many view this move as counter-productive, as it will ensure that no other company will consider Maxar , at its current valuation.

We believe that there are still redeeming factors that can help Maxar bounce back, the first is its investment in WorldView Legion remote sensing constellation that is likely to peak in 2019, which will mean more cash available to reduce its debt. It claims to have a very strong pipeline of commercial and government business, both classified and unclassified, which could turn its fortunes around.

One factor that could work to its advantage is the steady rise in the customer base for its subscription data products line, which includes SecureWatch, EarthWatch, Spatial on Demand and GBDX. EarthWatch has seen a doubling of its subscription base to over 70 international customers, from a variety of industries such as Jane’s by HIS Markit, Ushr, Betterview and government agencies such as South African National Space Agency (SANSA) to name a few. Its SecureWatch, a service that provides on-demand access to geospatial intelligence (GEOINT), has over 40 customers in the defence and intelligence space.

In addition, Maxar intends to continue investing in its 1300 series of large geostationary satellites, 500-kilogram Legion-class satellites, space robotics and defence integration work. One news to look forward to and that could catapult its stock prices is the launch of its three-satellite Radarsat Constellation Mission (RCM) for the Canadian Space Agency that was built in 2018 and that is scheduled for launch in June on a SpaceX Falcon 9 rocket. A successful mission is just what the company needs to put the naysers at rest.