Posted at 12:20h in Biotechnology by admin 0 Comments
0 Likes
Share

vTv Therapeutics (NASDAQ: VTVT), a clinical stage biotechnology company, presented additional positive data from a phase 2 Simplici-T1 study in patients with type 1 diabetes (T1D) at the Annual Meeting of the European Association for the Study of Diabetes in Barcelona. The clinical trial is the first one to test the activation of glucokinase as an adjunctive treatment for type 1 diabetes as per a company statement. The data follows similar positive results announced in June 2019, which demonstrated the ability of TTP399 to reduce HbA1c levels by 0.7% when compared to a placebo.

“These new clinical data enhance the very promising topline efficacy results we announced for this part of the study in June, where TTP399 reduced HbA1c levels by 0.7% relative to placebo. We believe that these results, if confirmed in the larger, on-going portion of the study, would strongly position TTP399 for phase 3 development to help address the needs of patients suffering with T1D.”

The initial trial with 19 patients who used both insulin pumps and continuous glucose monitors, and were administered up to 1,200 mg/day of TTP399 for seven days, met its primary endpoint of reduction in HbA1c at 12 weeks when compared to a placebo. Additionally TTP399 also increased blood sugar time in range by 11% (2.7 hours) per day and 12% (1.7 hours) during waking hours compared to control. The total mealtime Bolus insulin dose saw a reduction by 23% as against 4% for placebo. There were fewer incidences of Level 1 & 2 hypoglycemic as well.

The data also shows that the reduction in HbA1c was without any increase in ketones or abnormal lactates and had no serious adverse event reported such as diabetic ketoacidosis or severe hypoglycemia.

The company is focusing on Glucokinase (GK), which acts as a glucose sensor and is responsible for glucose homeostasis. It is an ideal candidate for treatment of Diabetes as it has demonstrated the potential to regulate the balance between hepatic glucose production (HGP) and glucose consumption and modulate changes in insulin secretion by the beta-cells. In addition, its effects are mostly limited to liver and pancreatic β-cells. 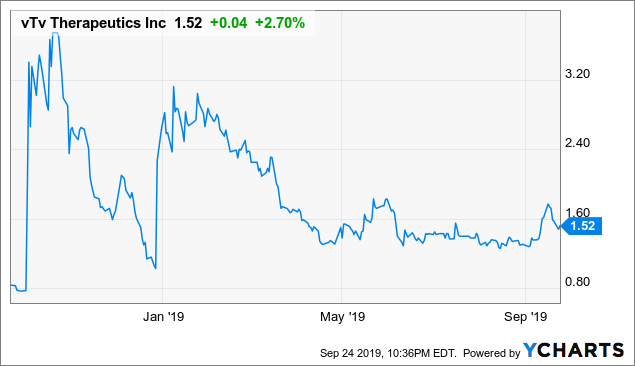 TTP399 is an oral small molecule, liver selective glucokinase activator that is being evaluated in clinical trials for the treatment of Type 1 and Type 2 Diabetes. In June 2019, the company announced positive results from Phase II Part 1 of Simplici-T1, a multi-center, randomized, double-blind, study assessing the pharmacokinetics, pharmacodynamics, safety and tolerability of TTP399 as an adjunct to insulin therapy in adult patients with T1D. The study is being supported by the Juvenile Diabetes Research Foundation. The study met its clinical endpoint of a statistically significant mean reduction in HbA1c, without any adverse events being reported such as diabetic ketoacidosis. The Part 2 of the study is fully-enrolled with patients who either use insulin pumps or daily injections with or without continuous glucose monitoring. The full results from this study are expected to be released in Q1 of 2020. However the initial data looks promising.

vTv uses its proprietary TTP Translational Technology, which is a fully automated and integrated process, to translate genomic and proteomic data into promising small molecule therapeutics. The company is currently developing its lead program Azeliragon (TTP448), a rage antagonist for Alzheimer’s that is in Phase 2 Clinical trials. It is also conducting Phase II trials on TTP399, a Glucokinase Activator and TTP273 an Oral GLP-1r Agonist for treatment of Type 2 Diabetes. The company has some more agonists and HexoKinase inhibitors under phase I and phase II trials.

It has a licensing agreement with Huadong pharmaceuticals for the China / Pacific Rim rights for the Type 2 diabetes drug candidate, Reneo for an Orphan Indication and NEWSQARA for COPD.

We believe that the company has the potential to transform the Diabetes treatment market with its novel approach. A robust pipeline, promising technology and a strong investor backing make this company one to watch out for in the future.