Will iAnthus be able to Surmount Challenges to Emerge a Strong Multistate Operator? 31 Jan Will iAnthus be able to Surmount Challenges to Emerge a Strong Multistate Operator?

Posted at 12:14h in Cannabis by admin 0 Comments
2 Likes
Share

iAnthus Capital Holdings (OTCQX: ITHUF), a multistate cannabis operator with cultivation, processing and over 30 dispensary facilities in 11 states in the U.S, has received approval from the Massachusetts Cannabis Control Commission, to grow and process recreational-use cannabis. The Company will commence its operations for adult-use cultivation from January 27, 2020. The license will enable iAnthus to serve the needs of the states recreational cannabis market with products such as flowers, edibles and concentrates. The facility is already supplying its Boston-based dispensaries, besides 30 other dispensaries and has plans to extend its supply to Worcester-based adult-use dispensary, which are currently in construction phase and an additional 35 other adult-use dispensaries.

“The Massachusetts cannabis market generated nearly $400 million in gross sales from adult-use cannabis retailers during its first year of legalization, according to the CCC.” He further added “Demand for adult-use cannabis in Massachusetts has continued to exceed supply and stock-outs are endemic across the market. We look forward to the opportunity to bring safe, high quality, well-curated products to the adult-use market just as we have to the medical market to help address this problem.”

Furthermore the Company had recently announced the opening of its GrowHealthy dispensary in Stuart, Florida, bringing its total dispensary count in Florida to twelve and its total store count to 30. iAnthus has plans to open additional stores in 2020, in locations such as Pensacola, Tallahassee and Largo, pending regulatory approval. It has additional sites under construction and 10 more stores under lease as per the Company. 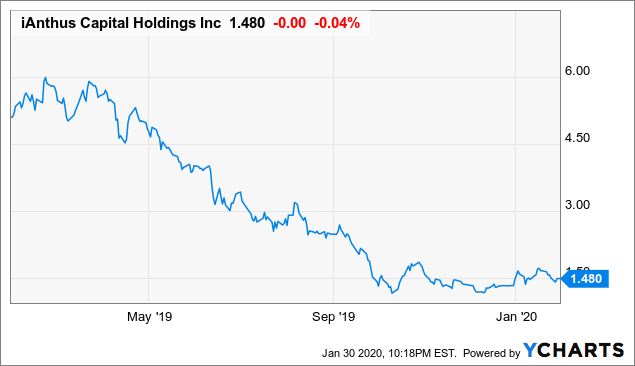 iAnthus has a series of first to its credit, from announcing the first all-share public acquisition with MPX Bioceutical Corp (CNSX: MPXI), the largest public cannabis transaction to date in the U.S valued at C$835 million, to being the first multi-state operator in the U.S. to go public and raise money in Canada. The Company is focused on building vertically integrated cannabis operations in high-growth markets and already has a well-established footprint in states such as New York, New Jersey, Massachusetts, Florida, Maryland, Arizona, and Nevada with plans to expand to more locations.

The deal with MPX Bioceuticals helped the Company expand its footprint to both the east and the west coast, with an addressable population of 121 million people, and a $10 billion market size. iAnthus also gained licenses to operate 68 retail locations over 500,000 square feet of cultivation and processing space across the U.S as per the Company. The Company intends to scale its operations across cultivation, processing and retailing, from building the largest indoor cultivation facility and expanding lab space in Florida, to serving over 2,300 retail locations in all 50 states with its CBD line. Its growth strategy involves seeking markets with high barriers to entry and high opportunities for growth.

iAnthus has established a significant footprint through acquisition of regional products brands, which it intends to consolidate under a new product brand in 2020. This will help the Company create more efficient marketing support and leave a larger impact on its target audience. It will continue marketing its award-winning line of MPX-branded products, which has over 150 wholesale partners across the states of Nevada, Arizona and Maryland. iAnthus will be consolidating all of its retail stores under the brand name “Be”, with the first flagship store set to open in Brooklyn, followed by a rebranding exercise for the rest of the stores to be completed in 2020. The Company intends to open stores in key cities such as Miami, Atlantic City, and Las Vegas. - Three Cheers for the Most Promising Cannabis-Infused Beverages!