Posted at 18:47h in Biotechnology by admin 0 Comments
2 Likes
Share

Niemann–Pick is a rare autosomal recessive inherited disease that is characterized by excessive accumulation of cholesterol and lipids in cells, leading to apoptosis and neural degeneration. The disease affects numerous body parts such as the brain, nerves, liver, spleen, bone marrow and lungs. Those suffering from the disease suffer from lack of coordination, dystonia; sleep disturbances, difficult in eating and swallowing and frequent bouts of pneumonia.

The disease is categorized into three types based on when it manifests and the severity of the symptoms, Type A and B are caused due to a malfunctioning enzyme called sphingomyelinase. Type C is a variant of the disease, where a patient may not exhibit or experience any symptoms until adulthood. The process of diagnosis involves testing blood samples or a skin biopsy, Magnetic Image Resonance (MRI), eye exam, genetic and prenatal testing.

There is no cure available to treat this condition, with treatment being limited to improving or delaying the onset of symptoms. Physiotherapy plays a crucial role in helping maintain mobility and hence is a recommended course of action. The only FDA approved drug for treatment of NPC, Miglustat (Zavesca), has demonstrated the ability to improve neurological symptoms; however it is known to cause tremors, gastrointestinal disturbances and spermatogenesis and has an adverse impact on patients with renal or hepatic impairment.

According to an estimate by the NIH, Niemann-Pick Type A and B affect 1 in 250,000 individuals, making it an extremely rare disease; however some races and ethnicities are more susceptible to this disorder, such as the Ashkenazi (eastern and central European people of Jewish Descent) who has 1 in 40000 chances of developing this condition. In addition Type C1 of the disease affects 1 in 150,000 individuals, accounting for over 95 percent of the diagnosis.

We take a look at some companies that are engaged in extensive research efforts to uncover a cure for this rare disorder. 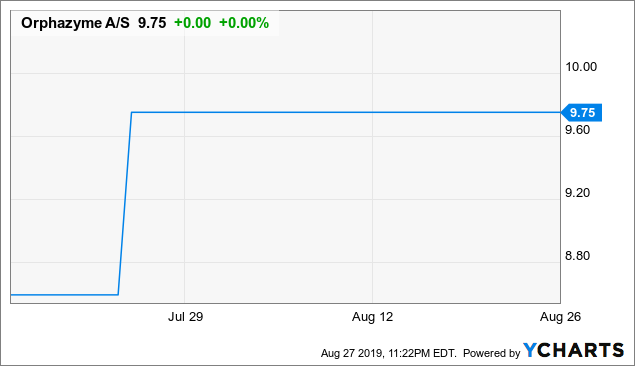 Arimoclomol, its lead drug candidate, is undergoing clinical studies for four indications namely Niemann-Pick disease Type C, Gaucher disease, sporadic Inclusion Body Myositis, and Amyotrophic Lateral Sclerosis. The drug candidate can improve the production of heat-shock proteins (HSPs), which can rescue defective misfolded proteins, clear protein aggregates, and improve the function of lysosomes. The Core technology of the company is based on the cell-protective properties of the heat-shock response. They act as molecular chaperones for stressed cells, by re-folding misfolded proteins and directing ‘terminally’ misfolded protein to be broken down.

NPC-001, an observation trail, demonstrated slowing of disease progression rate and led to identification of potential disease biomarkers for Niemann-Pick disease Type C (NPC). The study has completed a Phase II/III trial enrollment, with topline results being expected in Q1 2019. The company is all set to file for a NDA in H1 2020, with potential approval in H2 2020. 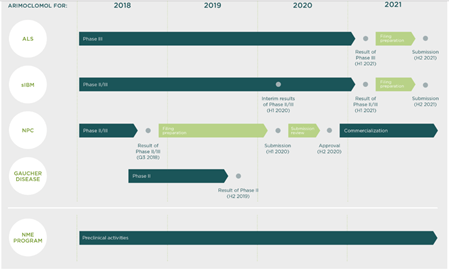 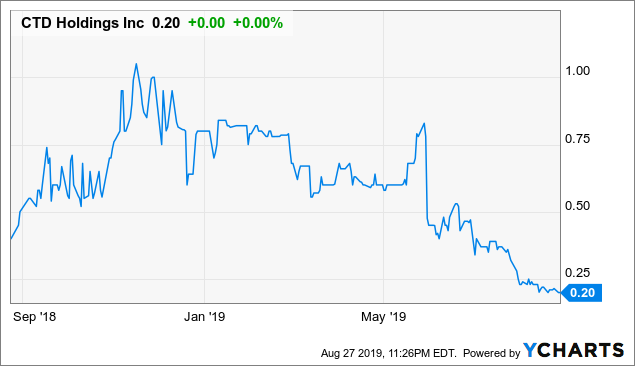 The company’s lead candidate for the treatment of Niemann- Pick disease is Trappsol® Cyclo™, a parenteral grade hydroxypropyl beta cyclodextrin, touted to be the world’s only Cyclodextrin Active Pharmaceutical Ingredient (API). It is a tiny sugar molecule, which has been scientifically altered. The drug has received an orphan designation by the FDA as well as European EMA. CTD is currently engaged in a Phase I open label Extension Study of the Long-Term Safety and Efficacy of Intravenous Trappsol® Cyclo™ (HPBCD) in Patients with Niemann-Pick Disease Type C (NPC-1)” (ClinicalTrials.gov NCT03893071) in the United States.

In May 2019, the company announced the first home-based infusion of its proprietary formulation of hydroxypropyl beta cyclodextrin, Trappsol® Cyclo™. CTD has tied up with United Biosource LLC (UBC), to help identify local health care professionals in the area of participating patients to administer CTD’s Trappsol® Cyclo™ drug intravenously to ensure reliable and objective tracking of patient information, according to a company statement.

Sphigo Biotechnology, its subsidiary, is primarily responsible for developing cyclodextrins as Active Pharmaceutical Ingredients (APIs) for the treatment of lipid metabolism defects related diseases. The company also offers custom formulation and packaging of cyclodextrin based pharmaceuticals, through cost – effective toll manufacturing services to both originator and generic drug manufacturers.

Cyclodextrins is available in powered and sterile liquid formulations and has numerous applications owing to its ability to make non-soluble materials soluble. It can bring together water or water insoluble or immiscible materials together effortlessly. 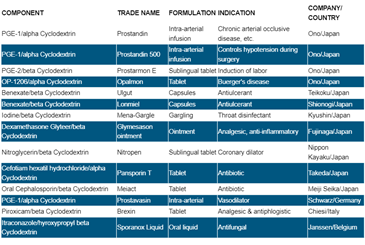 In addition the company also offers Aquaplex, a custom formulation of cyclodextrin complexes for commercial use, which can be used as flavoring oils or drugs. They have the ability to improve the ingredient solubility for food, nutritional and pharmaceutical formulations. CTD also sells cyclodextrins and related products to the pharmaceutical and nutritional industry, for use in diagnostics. 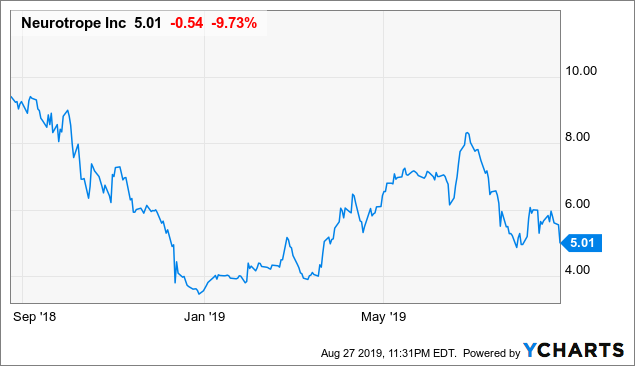 Bryostatin-1, a small molecule that helps in protein kinase C (PKCϵ) activation, is the company’s lead candidate for the treatment of various neurodegenerative disorders such as Alzheimers, Niemann Pick Type C and Fragile X Sydrome. The candidate is capable of stimulating synaptic growth factors, amyloid-β degrading enzymes and can prevent Tau transformation into neurofibrillary tangles.

The company‘s research efforts are focused on PKCϵ, which plays a crucial role in learning and memory. In preclinical studies, Bryostatin has demonstrated the ability to improve synaptic functions, facilitate new synapse formation, repair damaged synapses and prevent apoptosis and neuronal death. This is achieved by penetrating the blood brain barrier and activating the PKCϵ. 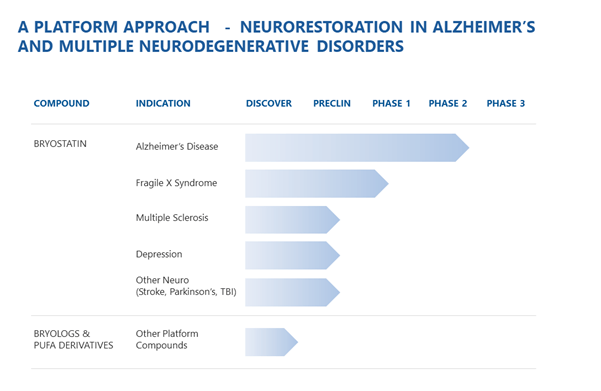 The company is developing a proprietary cyclodextrin that offers an improved pharmacodynamic and pharmacokinetic profile for the treatment of Niemann-Pick. The company is exploring the potential of Cyclodextrins, which is a small sugar molecule that can be categorized as α‐, β­, and γ- cyclodextrin and possesses a hydrophobic interior along with the ability to carry small lipophilic (fatty) molecules. They also offer the advantage of being generally recognized as safe (GRAS) as they cannot be degraded by human body and are excreted through the kidneys after the administration of an IV.

Cyclodextrins are of particular importance, for their ability to solubilize poorly soluble drugs, by creating water-soluble drug-CD complexes. Furthermore it leverages its experience in developing customized cyclodextrins, to chemically modify CD’s, so that they can find and reverse the actions of certain drugs in the bloodstream. Its expertise and in silico modeling capabilities, help it create CD’s that can trap, inactivate and detoxify harmful biological metabolites, which can accumulate in certain diseases. 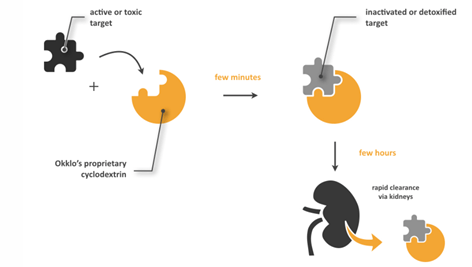 The company also possesses an extensive library of proprietary cyclodextins, which can be applied in biochemical and/or cellular assays for screening purposes. Okklo is currently focused on developing novel CD’s for the treatment of Hemostatis (hemophilia and anticoagulant reversal), Cystic Fibrosis, Immunology (Undisclosed Target), besides Lysosomal storage diseases such as Niemann-Pick type C disease.

The drug candidate has received 8 Orphan Drug Designations (ODD) by the FDA as well as the EMA for the treatment of Niemann-Pick disease Type C (NPC), GM2 Gangliosidosis (Tay-Sachs and Sandhoff disease), Ataxia-Telangiectasia, and Spinocerebellar Ataxias (of which there are 40+ known subtypes). It has also received Rare Pediatric Disease Designation for Niemann-Pick type C and Tay-Sachs disease.

IB1000 is an orally administered, modified amino acid (N-Acetyl-Leucine) that has demonstrated safety and tolerability. The company is developing N-Acetyl-L-Leucine (IB1001) on priority, based on encouraging results from preclinical studies. Intrabio has filed a series of New Drug Applications (IND) and Clinical Trial Applications in numerous countries such as United States, United Kingdom, Germany, Spain, and Slovakia

In addition, its pipeline consists of IB2000s series indicated for the treatment of  Ménière’s disease, IB3000s for the treatment of Type 2 Diabetes and Autism and IB4000 for the treatment of NPC liver dysfunction, for which it has received an Orphan Drug Designation, by FDA and the EMA. Intrabio has also built a robust intellectual property portfolio with patent protection for its candidates being valid until 2037.

- Can Madrigal Pharmaceutical’s Resmetirom Be a Potential Gamechanger in NASH?