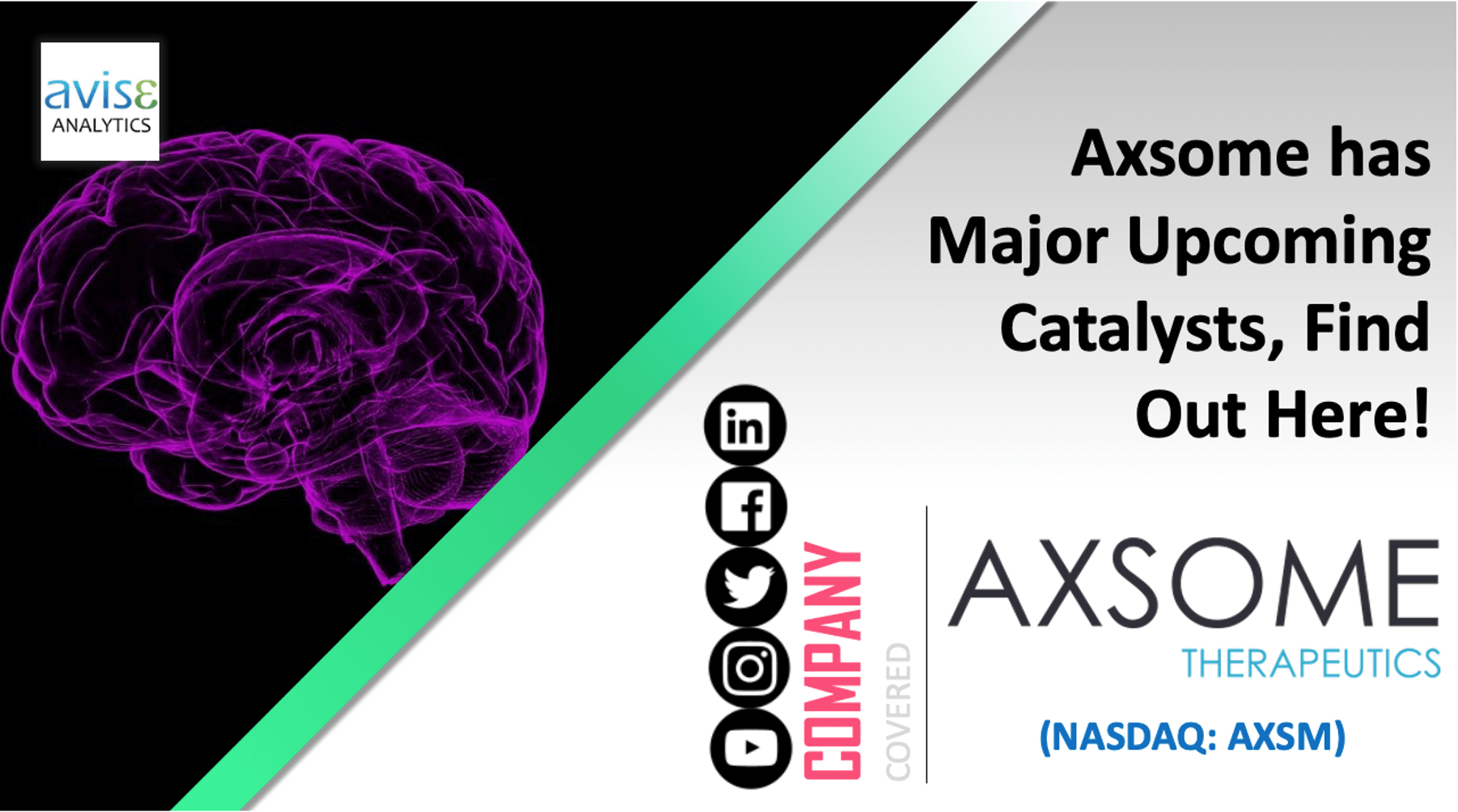 Posted at 12:13h in Biotechnology by admin 0 Comments
2 Likes
Share

Axsome Therapeutics, Inc. (NASDAQ: AXSM) uses its chiral chemistry and formulation capabilities to identify, isolate and stabilize chirally pure enantiomers for developing drug candidates for the treatment of central nervous system (CNS) disorders with large unmet needs. Its proprietary MoSEIC™ technology can increase the solubility and absorption of drug molecules, while its metabolic inhibition technology can increase the bioavailability and prolong the half-life. The company uses its in-depth knowledge of synthesis and analysis for narrowing target drug molecules. 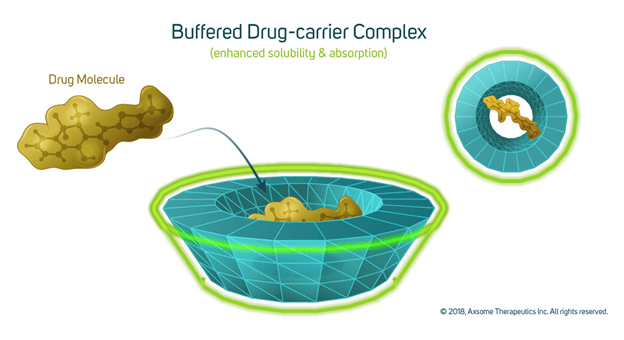 The Company has some major catalysts lined in 2021; we take a look at them below

Axsome Therapeutics is gearing up to submit its new drug application for AXS-05, a combination of bupropion and dextromethorphan for the treatment of major depressive disorder (MDD) in January 2021. The Company has reported positive results from an open-label Phase 2 COMET-SI trial with patients suffering from depressive disorder (MDD) who have suicidal ideation (SI). The candidate has demonstrated rapid reduction in of suicidal ideation, rapid functional improvement, and rapid, substantial, and durable improvements in overall depressive symptoms.

AXS-05, a glutamate receptor modulator and a sigma-1 receptor agonist, has more than 93 issued U.S. and international patents providing protection until 2040, with the Company holding worldwide rights. It was awarded the Breakthrough Therapy designation by the U.S. Food and Drug Administration (FDA) for the treatment of MDD in March 2019.

“The results of the COMET-SI trial suggest that AXS-05, as an oral NMDA receptor antagonist, may provide unique benefits to patients by potentially rapidly and durably improving not only suicidal thoughts but also functional impairment associated with depression. These positive effects expand on and are consistent with the differentiated clinical profile of AXS-05 observed in our completed controlled trials in patients with major depressive disorder.”

Major Depressive disorder is caused due to biological and psychological factors and can result in persistent depression, impairing sleep, behavior and quality of life. According to a report by GlobalData, the global major depressive disorder market is expected to reach $5.8 billion by 2025, growing at a CAGR of 6.1%, from $3.2 billion in 2015. Data from the 2017 National Survey on Drug Use and Health (NSDUH) suggests that nearly 11 million U.S. adults aged 18 or older had at least one major depressive episode with severe impairment. Bupropion is a popular treatment options for MDD, which will help the Company make inroads into the clinics without much resistance.

AXS-07, a combination of AXS-07, MoSEIC™ meloxicam and rizatriptan is a rapidly absorbed, multi-mechanistic medicine with increased solubility, speed of absorption and durability of action. The candidate has demonstrated rapid onset of action, superior efficacy, sustained pain relief and pharmoeconomic benefits in clinical trials .The Company intends to file for an NDA in Q1, 2021 with the FDA, utilizing the 505(b) (2) regulatory development pathway.

“The rapid and substantial efficacy of AXS-07 now observed in three separate trials indicates that AXS-07 may provide unique benefits to patients with migraine and help address the current unmet need for more effective treatments. These data further support our planned NDA filing of AXS-07 in the acute treatment of migraine in the first quarter.”

It is considered to be the third most prevalent disease in the world, affecting over 37 million in the U.S alone. It costs over $36 billion in lost productivity and incurs an estimated $5.4 billion in treatment costs. A report by Grand View Research predicts that the Global Migraine Therapeutics market will be worth over USD 7.8 billion by 2025 growing at a CAGR of 18.0%.

The current treatment options for migraine consist of generic triptans and other off-label drugs that have adverse side effects and are by and large ineffective. These come with side-effects such as drowsiness, memory related issues and weight gain.

AXS-05, a combination of bupropion and dextromethorphan, is its lead candidate for treatment of agitation associated with Alzheimer’s. The drug combines Dextromethorphan which is an NMDA receptor antagonist, sigma-1 receptor agonist, and inhibitor of the serotonin and norepinephrine transporters along with Bupropion that increases the bioavailability of dextromethorphan, and is a norepinephrine and dopamine reuptake inhibitor, and a nicotinic acetylcholine receptor antagonist.  In August 2020, the Company had a Breakthrough Therapy meeting with the FDA, which led to the initiation of ACCORD (Assessing Clinical Outcomes in Alzheimer’s Disease Agitation), a Phase 3  trial to evaluate the efficacy and safety of AXS-05 in the treatment of Alzheimer’s disease (AD) agitation. Topline results from the trail are expected to be announced in H2, 2022.

Alzheimer’s is the sixth leading cause of death in the U.S, a disease that causes irreversible degeneration of the brain cells and affects a person’s cognitive and behavioral abilities such as impaired judgment, deteriorating memory and personality changes with the gradual loss of motor abilities and speech.

A report by transparency market research predicts that the global market for Alzheimer’s will reach US$6.4 billion by 2025, growing at a CAGR of 7.5%, from US$3.6 billion in 2017. The rise in ageing population, increased awareness about the benefits of combined therapy, a favorable regulatory and government support environment are some of the factors that will contribute to the growth of the market. 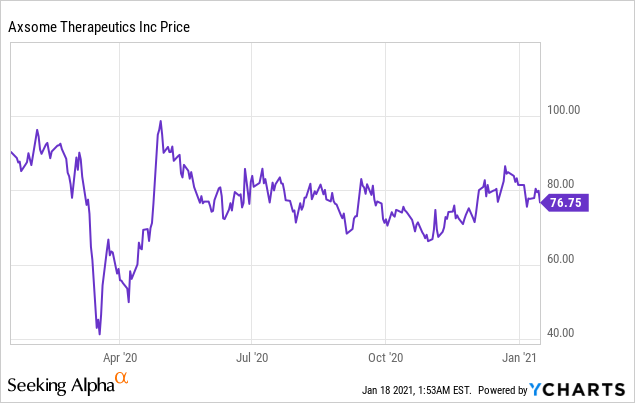