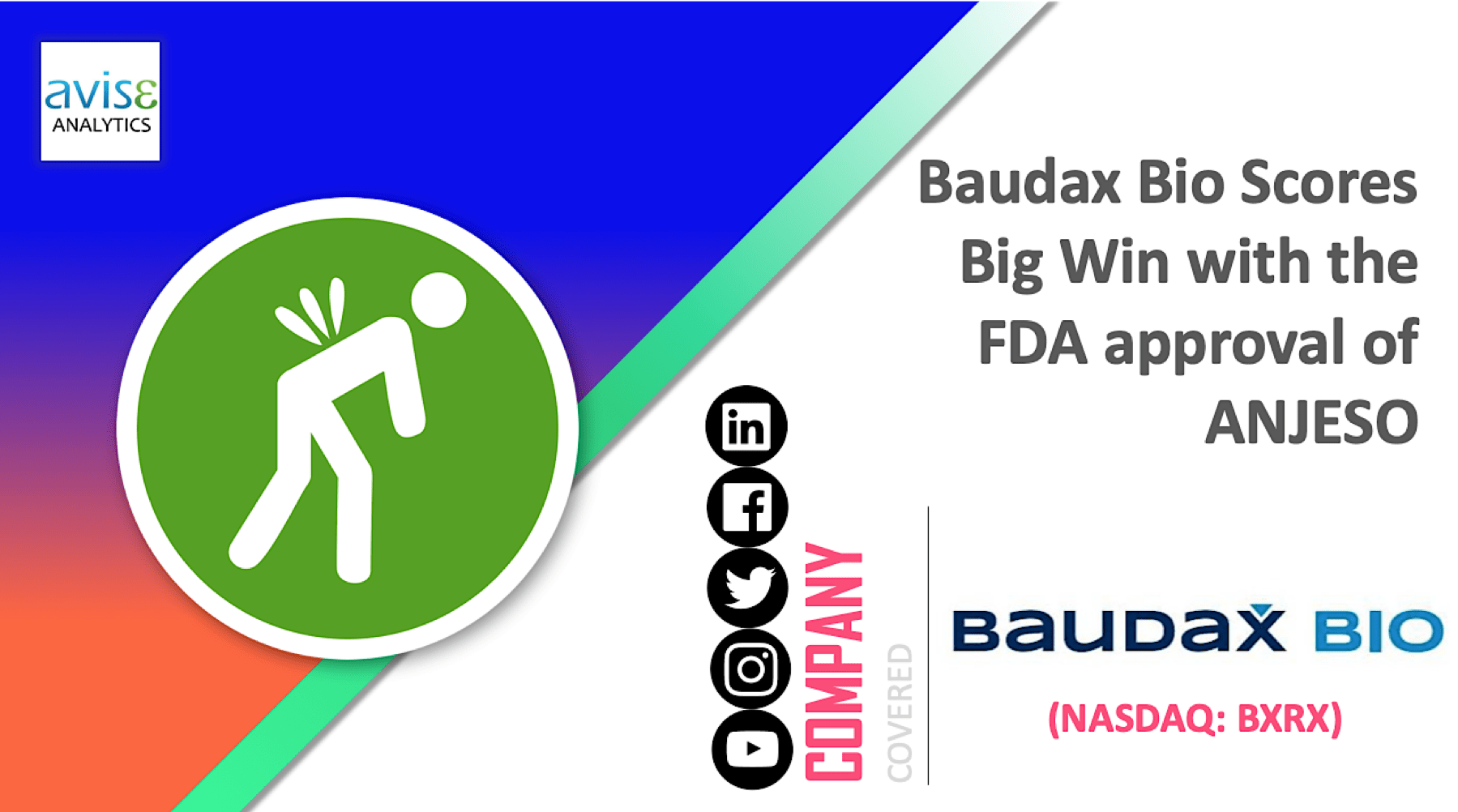 Posted at 12:05h in Biotechnology by admin 0 Comments
3 Likes
Share

Baudax Bio (NASDAQ: BXRX), a pharmaceutical Company developing novel therapeutics for Acute Care Settings, announed the approval of a New Drug Application ( NDA) for ANJESO (meloxicam injection), intended for alleviating moderate to severe pain, either as a standalone treatment or in combination with other non-NSAIDS analgesics. The drug candidate is administered as a once-a-day intravenous bolus push and is the only available 24-hour, intravenous (IV) COX-2 preferential non-steroidal anti-inflammatory (NSAID) to do so as per a Company statement.

Meloxicam, the active ingredient in ANJESO, is a long-acting, preferential COX-2 inhibitor which has analgesic, anti-inflammatory and antipyretic activities, related to the inhibition of cyclooxygenase type 2 pathway (COX-2), resulting in prostaglandin biosynthesis. The approval comes on the heels of two Phase III efficacy studies and one double-blind, placebo-controlled Phase III safety study, which demonstrate the drugs safety, efficacy and tolerability.

“The approval of ANJESO marks a major advancement in the treatment landscape for managing moderate to severe pain. With our nation currently in the midst of a national opioid epidemic, we are thrilled to be able to offer a novel, non-opioid therapeutic option with the potential to meaningfully impact the acute pain treatment paradigm. We expect to make ANJESO available to physicians and patients in late April or early May 2020.”

The approval has come as a relief for the Company, which faced rejection from the FDA in May 2018 and in March 2019 due to concerns about its efficacy as a monotherapy and its perceived failure to meet the prescriber expectations for intravenous drugs. The Company has plans to launch the product commercially by late April/ early May 2020. 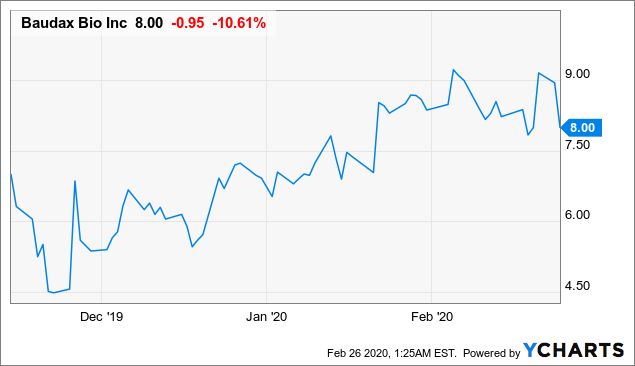 Chronic Pain is the leading cause for seeking medical aid in the U.S.A study undertaken by the Centres for disease control and prevention (CDC) in conjunction with NIH and other entities titled “Morbidity and Mortality Weekly Report (MMWR)”in the year 2016, estimates that 20.4% percent of the adults population in the U.S suffered from chronic pain, while 8 percent had high-impact chronic pain limiting at least one important activity in their daily life. Untreated or undertreated chronic pain contributes to$560 billion each year in direct medical costs, lost productivity, and disability programs in the U.S alone.

The global analgesic market is poised to amass $ 26.4 billion by 2022, growing at a CAGR of 7.1% during 2015 – 2022, according to a report titled “Analgesics Market by Type (Non-opioids, Opioids) and Route of Administration (Oral, Intravenous, Rectal, Transdermal, Topical) – Global Opportunity Analysis and Industry Forecast, 2015 – 2022” published by alliedmarketresearch.

The Analgesic market is broadly divided into Opioid and Non-Opioid therapeutics. Opioid based medicine has given rise to an addiction endemic with prescription drug overdose becoming one of the leading causes of preventable deaths in the U.S in turn prompting the government to declare a public health emergency in 2017.

This has resulted in growth in the non-opioid based drugs segment, with increasing emphasis being laid on research and development in finding non-opioid alternatives to managing chronic pain. According to a study published by BBC research named “Non-opioid Pain Treatment: Global Markets to 2022” the global market for non-opioid pain treatment which was $ 9.9 billion in 2017, is estimated to grow at a CAGR of 18% and reach $ 22.6 billion by 2022.

An increase in the geriatric population along with a rise in life-style related ailments and chronic diseases will drive the growth in the pain management therapeutic markets, along with a favourable government and regulatory environment, increased spending on research and development and fast track approvals for breakthroughs.

Baudax Bio is focused on creating therapeutics for acute care settings and has multiple candidates in various stages of clinical development. The Company was formed as a spin-off from Recro Pharma (NASDAQ: REPH), which separated its Acute care division from its contract manufacturing services in 2019. The Company aims to address the needs of patients, healthcare providers and payers for meaningful therapeutic options in acute care settings that offer improvement over existing alternatives.

The Company’s lead candidate IV injectable form of meloxicam, has been successfully evaluated in three Phase III clinical trials, including two pivotal efficacy trials, a large double-blind Phase III safety trial and other safety studies in over 1,400 patients. The drug compares favorably with other non-opioid therapies in areas such as pain relief, duration, extent and tolerability. Most importantly has the potential to overcome the side-effects associated with existing opioid therapeutics such as respiratory depression, excessive nausea and vomiting, constipation and abuse potential. 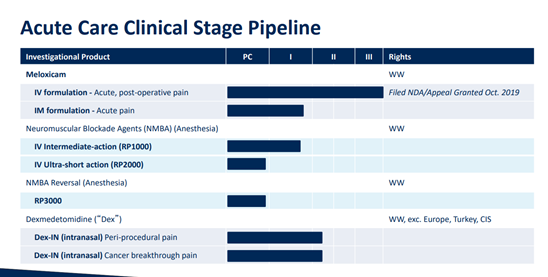 In addition, the Company’s pipeline also consists of two novel neuromuscular blocker agents (NMBs), a proprietary chemical reversal agent and Dex-IN, a proprietary intranasal formulation of dexmedetomidine, a selective alpha-2 adrenergic agonist that has demonstrated sedative, analgesic and anxiolytic properties as per the Company. Baudax has exclusive worldwide license to NMBA’s and the reversal agent from Cornell University.

The oral form of the drug has been marketed by Boehringer Ingelheim Pharmaceuticals, Inc since 1990’s under the brand name Mobic for the treatment of osteoarthritis and rheumatoid arthritis.

The Company utilizes Alkermes NanoCrystal® technology to offer a faster onset of action of Meloxicam, which otherwise has slow onset of action and poor water solubility.

- Will LIBRA Create A Financial Utopia or Dystopia?