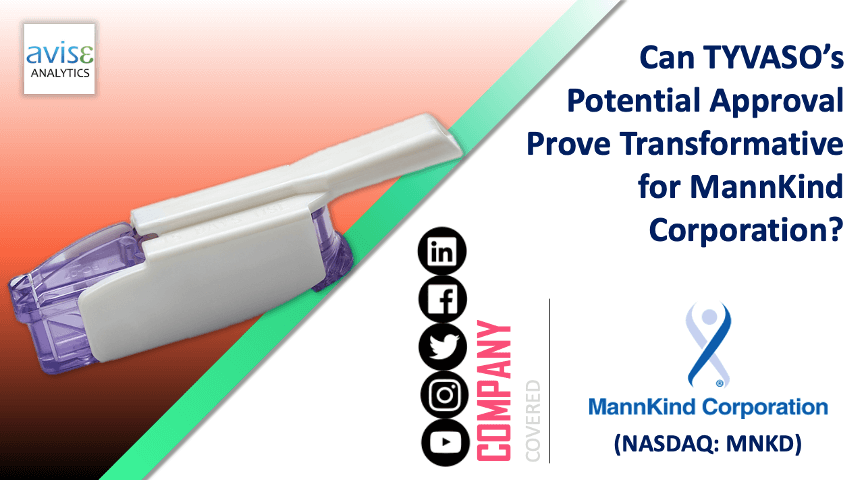 MannKind Corporation (NASDAQ: MNKD) is a biopharmaceutical company that is leveraging its unique Technosphere Technology, to develop and commercialize inhaled therapeutics, for the treatment of endocrine and orphan lung diseases. The Company’s work is based on the foresight of the visionary inventor and Alfred E. Mann, who not only founded 17 companies but also created leading-edge medical devices such as cardiac pacemakers, insulin pumps, cochlear implants, retinal prostheses among others. MannKind has been able to bring his idea of a dry powder insulin formulation to fruition through Afrezza®, the Company’s flagship product. 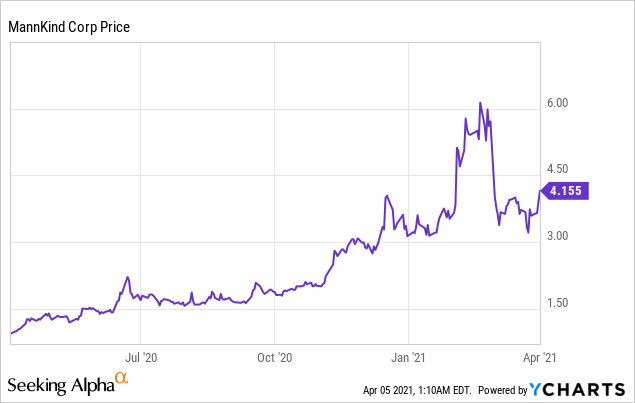 An Industry with Massive Unmet Need

Metformin is the first line of treatment adopted by doctors due to its minimal long-term side-effect profile, while there are other treatment options available such as sulfonylureas (SUs), these are being replaced by therapeutics involving DPP-4Is , GLP-1RAs, SGLT-Is which have a far safer side-effect profile and other benefits such as improved cardiovascular health, weight loss etc. The industry has a huge unmet potential for novel patented products that can overcome the limitations of existing therapeutics options.

Afrezza is a rapid-acting inhaled insulin that helps in managing the glucose levels of adults with type1 or type 2 diabetes. The drug is self-administered through an oral inhaler that dispenses insulin through the lungs during mealtimes. The drug is available in the form of 4-, 8-, and 12-unit color-coded, single use cartridges to be used in combination with the Afrezza® inhaler.

The drug is fast acting and passes from the lungs to the bloodstream in less than a minute, once inhaled it starts controlling the blood sugar in about 12 minutes. Moreover, Afrezza only works for 1.5 to 3 hours (depending on dosage), allowing the flexibility to take additional doses if required. The drug is delivered through the large surface area of the lungs which facilitates rapid absorption and much faster action as compared to other approaches. Most importantly it eliminates the use of over 1000 needlesticks (Company estimate) per year as it is inhaled and not injected. However, the drug is not a substitute for long-acting insulin and is meant to be used in combination with one for those who have type 1 Diabetes.

In December 2017, the Company entered into a supply and distribution agreement with BIOMM SA for the commercialization of Afrezza® (insulin human) Inhalation Powder in Brazil. BIOMM was responsible for regulatory filing in Brazil and received an approval from the Brazilian Health Regulatory Agency (ANVISA) in June 2019 and commenced sales and distribution in January 2020.

“The regulatory approval of Afrezza in Brazil is an important milestone for MannKind and our partner Biomm. It not only represents our first international approval of Afrezza, but more importantly, we now have the opportunity to bring a novel mealtime insulin therapy to patients in a country with one of the highest prevalence of diabetes in the world, according to the International Diabetes Federation.”

The Company is evaluating the safety and efficacy of Afrezza® in pediatric patients through a phase 3 trial.

The Company is co-promoting THYQUIDITY, a liquid dosage form of levothyroxine that is dispensed through a calibrated oral syringe. The drug is indicated as a replacement therapy in primary (thyroidal), secondary (pituitary), and tertiary (hypothalamic) congenital or acquired hypothyroidism and as an adjunct to surgery and radioiodine therapy in the management of thyrotropin-dependent well-differentiated thyroid cancer.

In December 2020, the Company entered into a co-promotion agreement with Vertice Pharma to promote THYQUIDITY to adult and pediatric endocrinologists and other entities who treat hypothyroidism, through Mannkind’s sales force in the U.S. The Company will receive a specified quarterly payment to compensate for the costs of additional promotional activity and also receive royalties on gross profit from the sales of THYQUIDITY.

“We are excited to co-promote Thyquidity with Vertice Pharma. This arrangement allows us to strengthen our relationships with our current customers, expand into pediatric endocrinology and leverage the talent and capabilities of our sales force and reimbursement support systems.”

In September 2018, the Company entered into a worldwide exclusive licensing and collaboration agreement for a dry powder formulation of Treprostinil, intended for the treatment of pulmonary arterial hypertension. As per the terms of the agreement, United Therapeutics will handle the development, regulatory and commercialization activities, while MannKind will be responsible for initial commercial supplies. The deal involves an upfront payment of $45 million and potential milestone payments of up to $50 million to Mannkind, payable on achievement of specific milestones. In addition, the Company will also receive low double-digit royalties on net sales of the product. The agreement also gives the option to expand the license to include other active ingredients for pulmonary hypertension, with additional milestone and royalty payments. 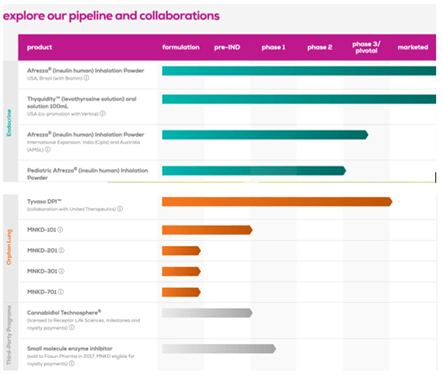 An Extensive Pipeline of Candidates

The Company’s pipeline also has a Cannabidiol Technosphere®, that has been licensed to Receptor Life Sciences in exchange for milestone and royalty payments. MannKind sold a small molecule enzyme inhibitor to Fosun Pharma in 2017, however the Company is still eligible to receive royalty payments on the same.

The Global Diabetes Market is expected to reach USD $58.4 billion by 2025. Diabetes is a rising menace that is reaching endemic proportions and there is a large unmet need for novel therapeutics that can address the disease. This presents a great opportunity for the Company to capture a large market share.

Afrezza is doing exceedingly well in terms of sales, with net revenue from the product increasing to over 30 percent to $10.1 million in Q4,2020 as compared to Q4,2019. In addition, the drug’s net revenue increased to $32.3 million, a 28 percent increase when compared to 2019. The growth in revenue is primarily on account of higher demand, a more favorable mix of Afrezza cartridges, an increase in prices and more favorable gross-to-net deductions as per the Company.

The approval will not only help MannKind receive its milestone payment but also royalties on the future sale of the product, which is expected to be transformative for the Company’s fortune. Analysts expect the peak revenue from the product to be at nearly $1B and believe that it could be a potential game changer for the Company.

The Company also acquired QrumPharma, which has added a nebulized version of clofazimine to its growing pipeline of orphan lung disease therapeutics.

- Scientific Breakthrough seeks to end the suffering of people with Vitiligo