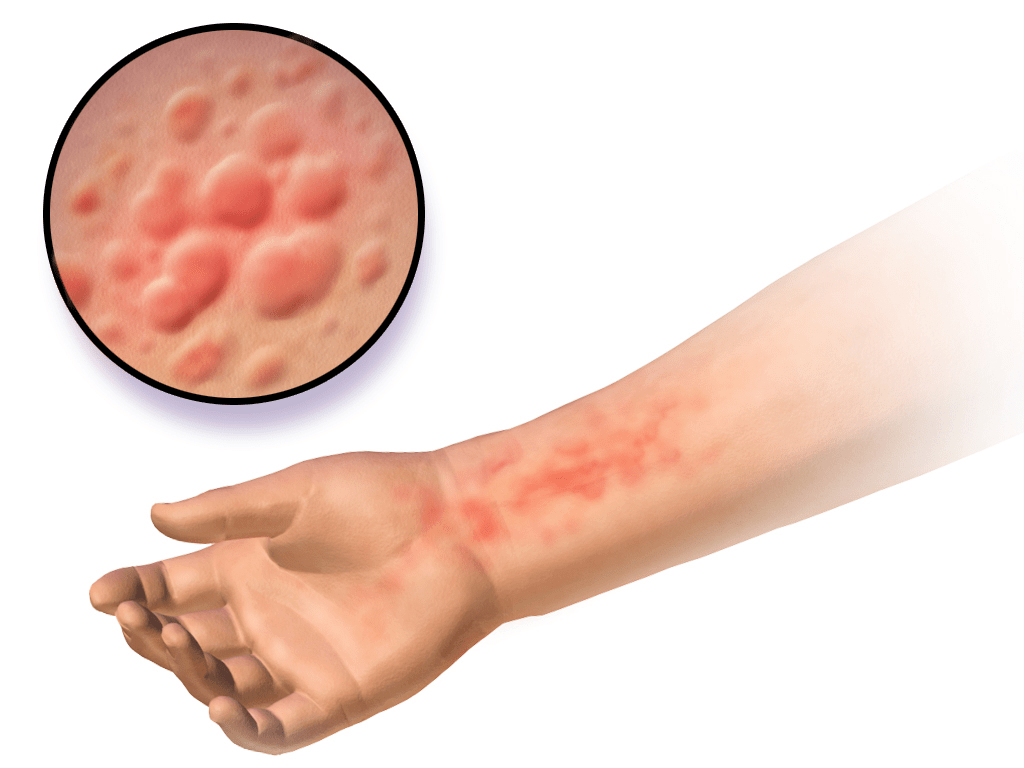 Pruritus is characterized by an uncomfortable and persistent urge to scratch caused either due to a skin disorder or an underlying systemic disease such as atopic dermatitis, mycoses, chickenpox, hepatitis, Jaundice, chronic renal failure, cholestasis or NASH. These can be chronic in nature and affect the quality of life of those suffering from it.

The global market for Pruritus therapeutics stood at USD 11.09 billion in 2018 and is likely to grow at a CAGR of 6.2 percent to reach USD 17.99 Billion 2026 according to a report by reports and data. The growing incidences of skin ailments, upcoming patent expiration, increasing regulatory support, strategic mergers, partnerships and collaborations between key players are likely to drive the growth in the market.

However, the adverse side-effects of the drugs and availability of photo therapy may limit the growth prospects. The discovery of small molecules, TRP Channel Antagonists, Peptide based treatments are some of the novel innovations that seek to address the unmet needs in this area. We take a look at some companies which are engaged in finding a novel solution to this problem: 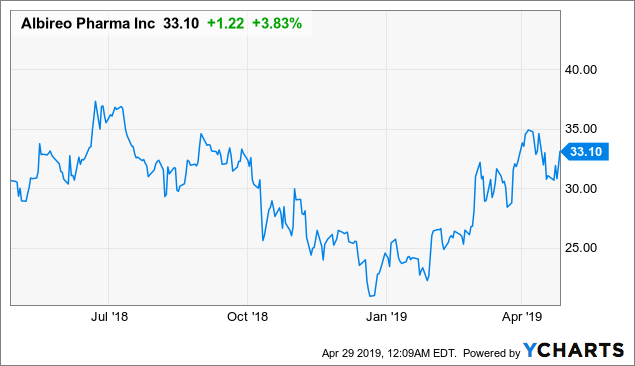 Albireo’s lead candidate is A4250, an orally administered ileal sodium dependent bile acid transporter (IBAT) inhibitor, currently undergoing Phase III trials for the treatment of progressive familial intrahepatic cholestasis and Phase II trials for children with cholestatic liver disease and pruritus. Odevixibat (A4250) is also referred to as the apical sodium dependent bile acid transporter (ASBT) and offers minimal systemic exposure and a targeted approach. It has received a fast track, rare pediatric disease and orphan drug designations from the FDA, in addition, to receiving an orphan drug status and access to the priority medicines (PRIME) scheme from the EMA. 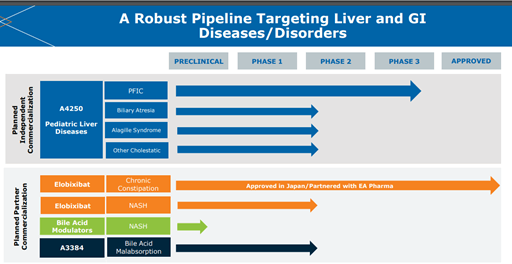 It is currently engaged in conducting a single randomized, double-blind, placebo-controlled, multicenter clinical trial and an open-label long-term extension study, called PEDFIC1,with patients between 6 months to 18 years from countries such as United States, Canada, Europe, the Middle East and Australia.

The company’s pipeline also consists of elobixibat, an orally administered IBAT inhibitor indicated for chronic constipation and other functional diseases, and nonalcoholic steatohepatitis, A3384 for the treatment of bile acid malabsorption. Alberio has a licensing agreement with EA Pharma for the development and commercialization of elobixibat in Japan. 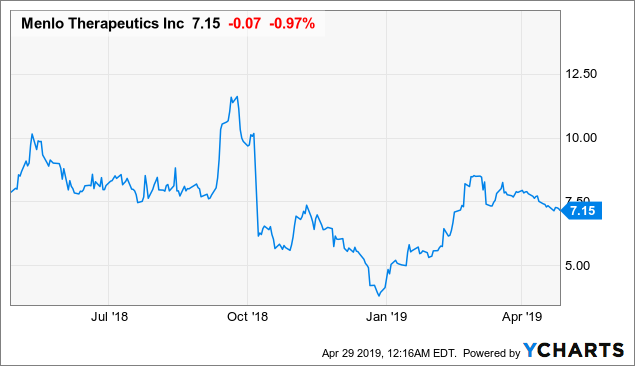 Menlo Therapeutics is engaged in developing serlopitant, a highly selective, once-daily, oral small molecule inhibitor of the neurokinin 1 receptor, or NK1R for the treatment of Pruritis. It directly works on two important mediators of the urge to itch namely substance P, a naturally occurring peptide in the tachykinin neuropeptide family and its receptor neurokinin-1 receptor, or NK1-R. The binding of SP to NK1-R is the key reason behind nerve-signalling including itch-scratch reflex and the vomiting reflex.

This late stage biopharmaceutical company aims to focus on creating a solution for Pruritus and sees a great commercial opportunity as currently there are no therapies available to exclusively target this disease in the U.S. It has been granted a FDA breakthrough designation and plans to file for an Investigational New Drug Application (IND) in 2020.

It holds exclusive, royalty-free rights to develop and commercialize serlopitant in all markets. Its pipeline consists of the application of serlopitant in the treatment of prurigo nodularis itch, psoriasis itch and chronic pruritus of unkown origin which are in various stages of clinical development.

It holds intellectual property rights to composition of matter in the U.S including extensions and methods of use which will offer it protection until 2030. 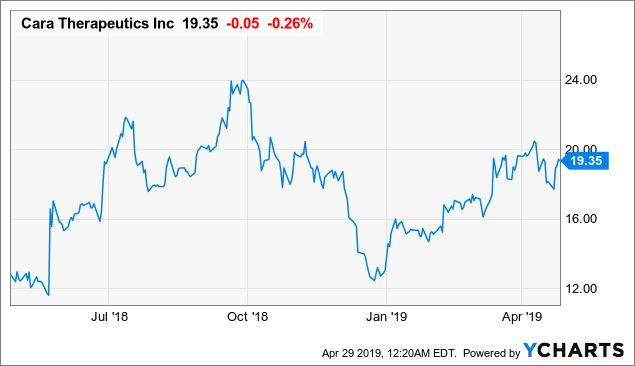 It is a clinical stage biotechnology company focused on developing new chemical entities that target the body’s peripheral kappa opioid receptors to address unmet medical needs for patients suffering from pruritus and chronic pain. Its most advanced compound CR845, which is under phase III clinical trials currently, is the first peripherally acting kappa opioid receptor agonist (KORA). The degree of kappa receptor selectivity displayed by CR845 ranks as best-in-class compared to all other previously developed compounds for this therapeutic target as per the company’s claims. CR845 exhibits potent analgesic, anti-inflammatory and anti-pruritic (anti-itch) properties in both human and animals with minimal side effects.

CR845 was also studied in a Phase 2 trial for uremic pruritus, a severe itch that develops in upwards of 60%-70% of dialysis patients. It has shown promising results in various phase II trials for the treatment of acute postoperative pain, chronic pain and pruritis.

The Company made a public offering of 5,175,000 shares of its common stock in July 2018, raising approximately $92.1 million in net proceeds. R&D expenses were $22.3 million in the third quarter of 2018 compared to $9.2 million in the same period of 2017. The higher R&D expenses in 2018 were principally due to a net increase in costs associated with clinical trials. 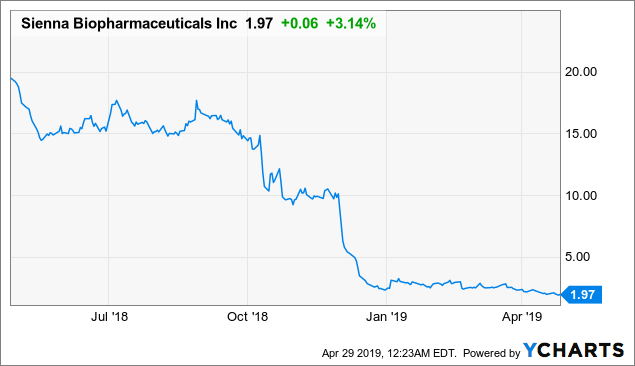 Sienna Biopharmaceuticals, is a clinical-stage biotechnology company with focus on developing immunology and inflammation related therapies that target select pathways in specific tissues like the skin. 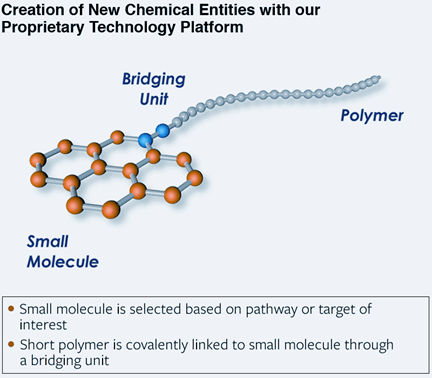 The company’s lead candidates for the treatment of psoriasis and associated pruritus is  SNA-120, a first-in-class inhibitor of tropomyosin receptor kinase A and SNA-125, a topical dual Janus kinase 3 inhibitor indicated for the treatment of atopic dermatitis, psoriasis and associated pruritus, that are currently undergoing Phase III and Phase II trials respectively. SNA-125 is also being studied for its efficacy as a gut-restricted therapy for inflammatory bowel disease and ulcerative colitis. 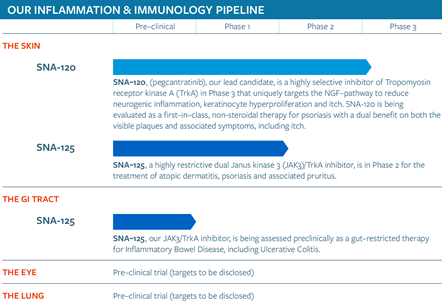 In addition, it is also developing SNA-001, a silver photoparticle based therapy derived from its topical photoparticle therapy platform for the treatment of skin disorders such as Acne and reduction of light-pigmented hair.

The Company closed a follow-on public offering of 9,200,000 shares of common stock at a price of $2.50 per share for net proceeds of $21.3 million in February 2019. Its cash and cash equivalents were approximately $48.5 million at the end of December 2018, excluding the proceeds from the public offering.

Trevi Therapeutics, is developing nalbuphine ER, that has a dual mechanism of action working both as an antagonist to mu opioid receptor and as an  agonist to the kappa opioid receptor that can target the central nervous and peripheral systems in people with severe neurological conditions. 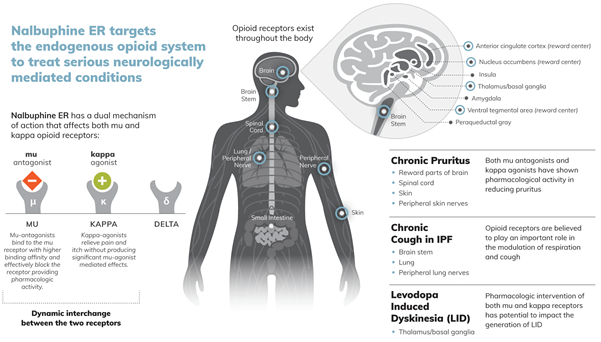 It is currently being evaluated in Phase 2b/3 PRISM (Pruritus Relief thru Itch-Scratch Modulation) clinical trial for treatment of prurigo nodularis (PN). In addition, a phase 1b study is underway for studying its efficacy in chronic cholestatic liver diseases such as primary biliary cholangitis (PBC) and primary sclerosing cholangitis (PSC). It is also looking to study its application in the treatment of uremic pruritus (UP) for patients undergoing hemodialysis. Trevi plans to submit an Investigational New Drug Application (IND) for chronic cough in Patients with idiopathic pulmonary fibrosis (IPF), followed by initiating a phase II trial in H1, 2019. 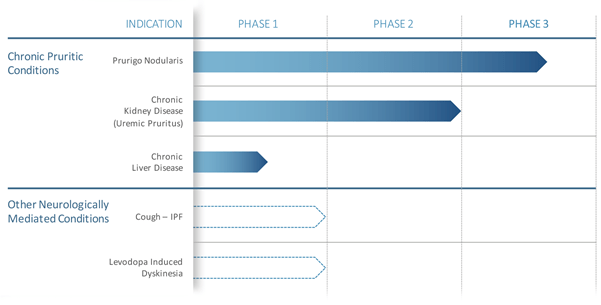 It is also planning on submitting an Investigation New Drug application for treatment of levodopa-induced dyskinesia in patients with parkinson’s disease and intends to initiate Phase 2 trial of nalbuphine ER in the second half of 2019.

In February 2019, the Company entered into a licensing agreement with Rutgers, The State University of New Jersey and MentiNova  for intellectual property and data supporting the development of nalbuphine ER for levodopa-induced dyskinesia (LID) in patients with Parkinson’s disease.

Sorry, the comment form is closed at this time.