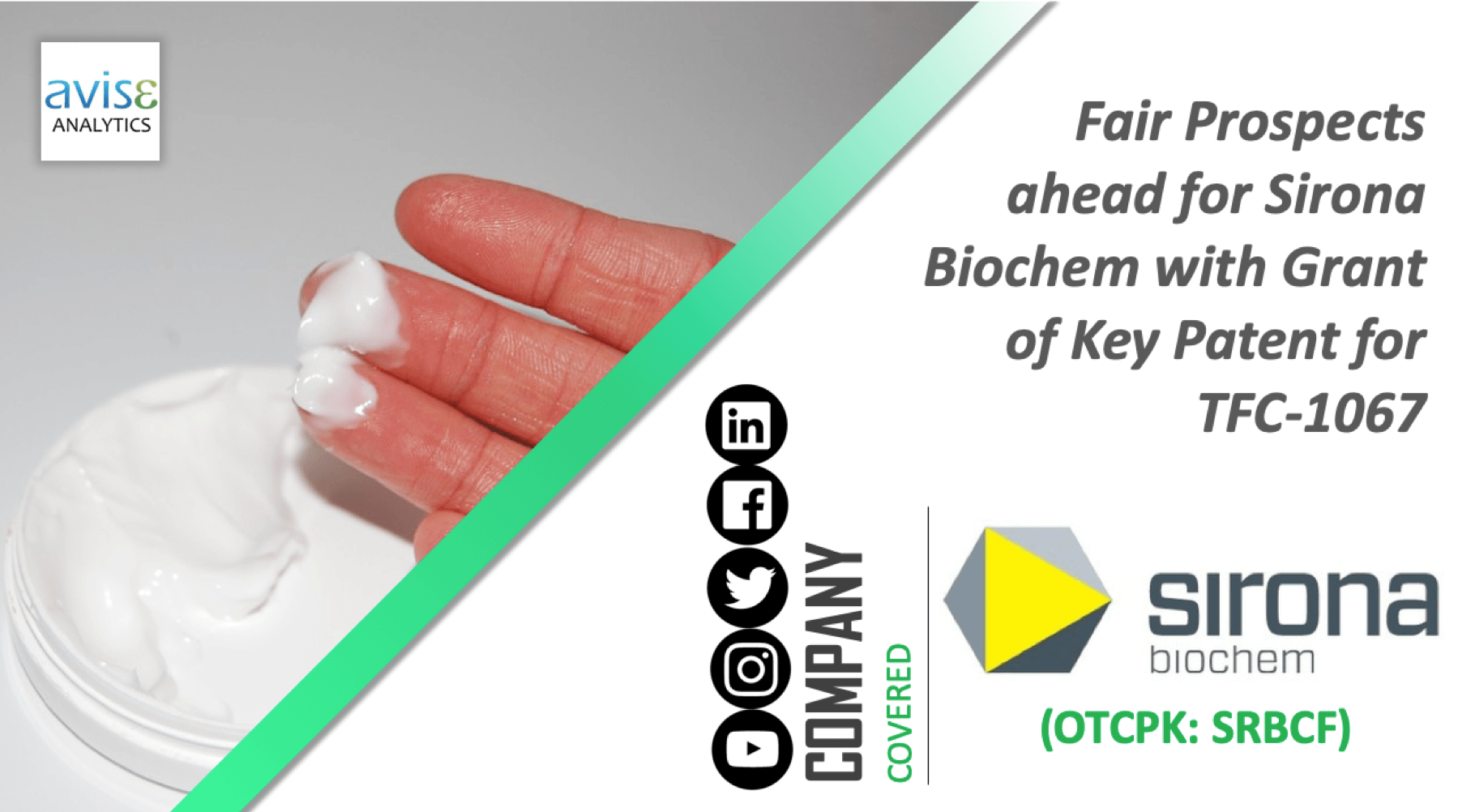 Sirona Biochem (OTCPK: SRBCF), a biopharmaceutical company focused on discovering novel cosmetic and pharmaceutical compounds, announced the grant of a patent for TFC-1067, its lead skin lightening compound. It uses its proprietary fluorination chemistry, to create unique and superior compounds, which are hydroquinone free and safe to use. The patent titled “Gem Difluorocompounds as Depigmenting or Lightening Agents” has been approved in the U.S. In addition it has been granted patents in Germany, France, and United Kingdom and has patent applications pending in other countries worldwide. 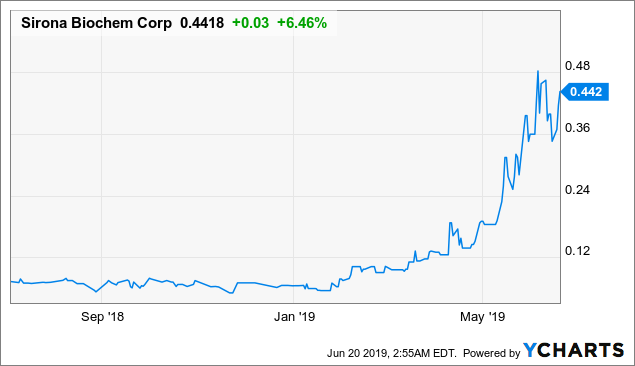 According to the CEO of Sirona Biochem, Dr. Howard Verrico

“This patent grant in one of the largest skin care markets is another important milestone for TFC-1067. The patent application was without concern to our potential partners as determined by their IP lawyers however it is an important and exciting milestone to reach. This will allow our potential US partners’ absolute IP certainty to move forward with their product marketing plans.”

The company has signed a non-binding term sheet with Rodan+Fields LLC, the number one skincare brand in the U.S. and North America, for manufacturing and supplying TFC-106, on a non-exclusive basis for the U.S, Canada and Australian markets. Sirona will receive revenues from the sale of TFC-1067, along with a fee to be paid on signing a definitive agreement between the companies in Q3/2019. It will also receive milestone payments for each product launched that contains TFC-1067.

“After many years of developing TFC-1067 with the support of the French government and European Union in the Cosmetic Valley, France, we are excited to partner with skincare industry leader Rodan + Fields. This marks an important milestone for Sirona Biochem. We highly value the successful due diligence of Rodan + Fields as further validation of our technology platform, in particular TFC-1067.”

It has also announced positive results from its anti-wrinkle program, wherein its lead glycoprotein compound has met key in vitro measures and in silico analyses of safety such as skin irritation, skin sensitization, ocular tolerability, phototoxicity, genotoxicity and carcinogenicity. It is developing this product to target the global anti-ageing market and believes that it has a potential game changer in hand.

“This anti-wrinkle compound [LIP-01] has fascinating properties in cells and we anticipate moving it along quickly. If clinically successful, LIP-01 could exceed Botox in market potential,” Dr. Verrico opined.

Sirona leverages its expertise in the development of carbohydrate-based molecules, to advance novel molecules in primarily three areas with unmet needs, cosmetic agents, therapeutics and biological agents. The company’s fluorination chemistry can stabilize carbohydrate-based molecules to develop safer and effective pharmaceutical active ingredients. This technology was acquired through TFchem and has allowed it to develop three high value programs.

Besides its cosmetic pipeline that is focused on skin lightening and anti-ageing, it is also developing a Sodium Glucose co-transporter (SGLT2) inhibitor for the treatment of Diabetes and Inflammation. 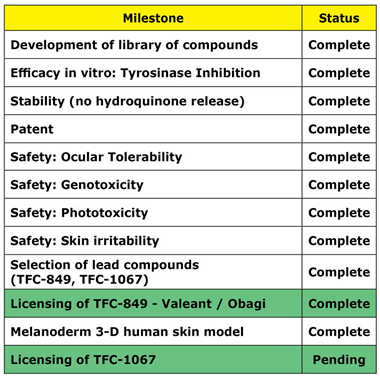 Recognised and awarded for its scientific innovation in France, the company’s subsidiary TFchem, is the recipient of a CDN$1.9 million grant from the French Government to develop a cosmetic skin lightening program. Prior to the development of TFC-1067, the company had developed TFC-849, another skin lighetning compound that has been licensed for commercialization to Obagi Medical Products (Obagi). The deal resulted in the company receiving an upfront payment in addition to ongoing royalty payments for global product sales from Obagi Medical Products (Now a part of Haitong International Zhonghua Finance Acquisition Fund I LP). 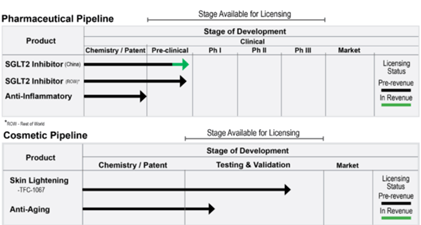 It has licensed the SGLT2 inhibitor to Wabang Biopharmaceuticals granting it exclusive developmental and commercialization rights for China. It is working on a glycoprotein compound, which can offer cell protection under different stressors, such as UV and starvation and could be used in the treatment of keloid, stress protection and cell preservation.

The Global Skin Lightening product market is estimated to reach over 23 billion by 2022 according to a report by Factmr. Fair Skin is desired by the burgeoning young population in countries such as India, China and Japan that associate it with beauty and youth, and are the primary drivers of the market. Women, who hitherto constituted the largest customer base for these products are now facing stiff competition from men. The need for UV protection in topical areas, where harsh weather conditions necessitate the use of skin lightening products, are adding to the demand. 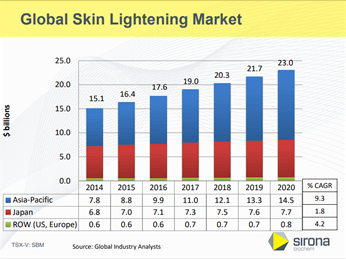 The rise in disposable income and buying power, along with increased body consciousness and image issues, are fuelling the growth in the market. In addition, an increasing number of people are turning to these products to treat medical conditions such as hyperpigmentation, melasma, liver spots caused by pregnancy, hormonal changes or damage to the skin.

One of the most common ingredients found in Skin lightening treatment products is hydroquinone that blocks the process of discolouration. However it can cause side-effects such as skin irritation, burning sensation and dryness, the more severe side-effects include cracking, blistering and darkening of the skin, swelling of the tongue / throat, dizziness and breathlessness.

TFC -1067 has proven to be superior to existing conventional skin lightening options in extensive preclinical and clinical studies. Results from the studies have demonstrated that it is more effective and has no adverse side effects when compared to hydroquinone in treatment of dyschromia.

Sirona Biochem has a great track record of turning its clinical successes into lucrative licensing deals. Its ability to constantly innovate, and use its proprietary technology to provide solutions for markets with large unmet medical needs, will drive its future growth. A strong network of partnerships in key markets, both in the areas of product development and commercialization, will hold the company in good stead. 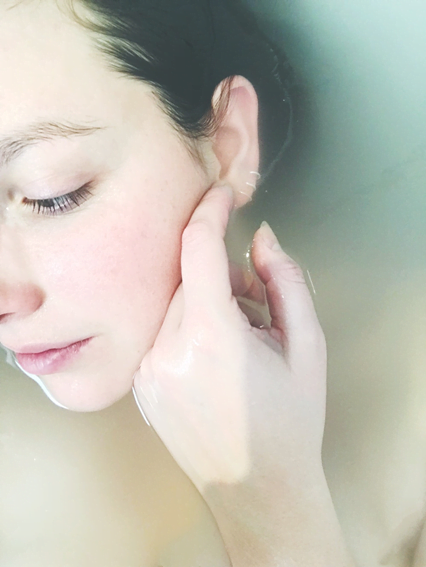 - Major Upcoming Catalyst Makes Sesen Bio A Stock to Watch Out For!

- Upcoming Catalysts Make BioCryst Pharmaceuticals a Stock to Watch Out for!