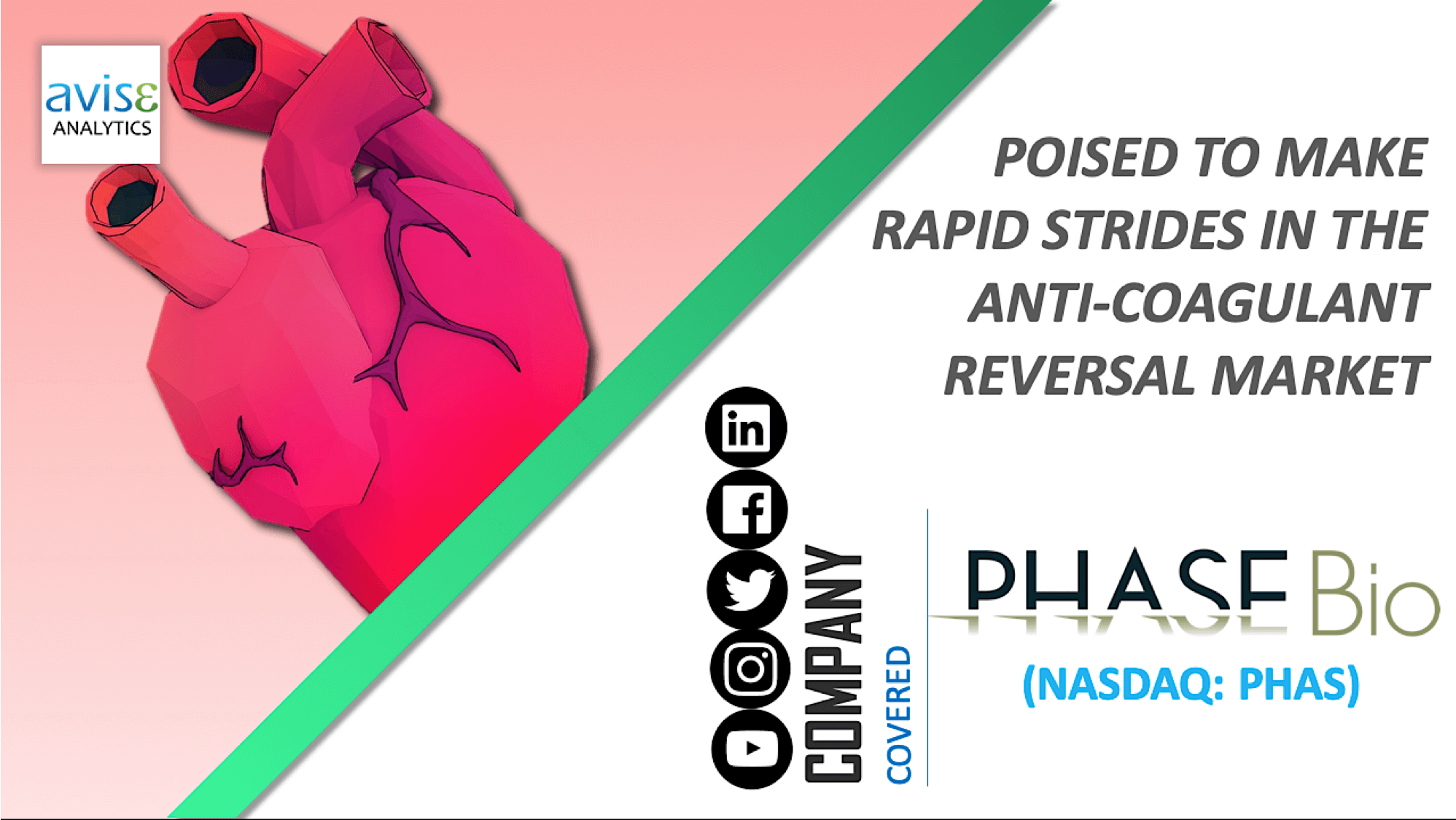 PhaseBio’s (NASDAQ: PHAS), PB2452 is the new drug on the block, which has received a breakthrough therapy status from the FDA in April 2019. The company’s stock rose by almost 32%, on the day it announced the news. It acts as a reversal agent for the antiplatelet drug ticagrelor for patients who are bleeding majorly or those who require immediate surgery. It acquired PB2452 from MedImmune, the global biologics research and development arm of AstraZeneca (NYSE: AZN) through a licensing agreement. 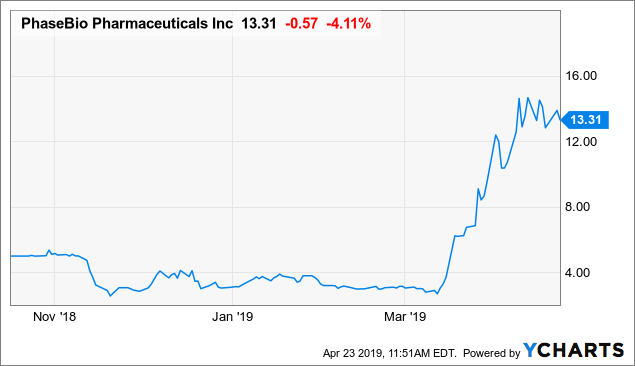 Anticoagulant Reversal Agents – The need of the hour

Anticoagulants or blood thinners are lifesavers that prevent blood clots and reduce the risk of strokes and cardiac arrests. Anticoagulants have wide applications for prevention of blood clots in treatment of conditions such as pulmonary embolism, deep vein thrombosis (DVT), atrial fibrillation, stroke management and thromboembolic disorders.

According to data, made available by centers for disease control and prevention (CDC) about 900,000 people are affected by DVT/PE each year in the U.S and 60,000-100,000 succumb to it. These numbers are likely to rise in the future owing to an ageing population and increasing risk of stroke due to lifestyle changes, improper diet, obesity and diabetes.

A report by Allied Market Research predicts that the anticoagulant market will be worth $43,427 million by 2025, growing at a CAGR of 7.5% from $24,265 million in 2017. There is a growing demand for novel oral anticoagulants (NOACs), with the segment estimated to grow at a CAGR of 8% during the forecast period.

Warfarin, a vitamin K antagonist (VKA), is the most common oral anticoagulant, with several limitations in its use and management such as intracerebral bleeding, toxicity, an inordinate amount of time required for it to become active, interaction with food, hair loss and fatigue to name a few. New generations of oral coagulants aim to address the unmet needs in this field specifically one’s that do not need frequent lab monitoring or dose adjustments and are fast-acting. In addition, they leave the body faster and cut down the risk of intracranial bleeding by about 50%.

The introduction of direct oral anticoagulants (DOACs) especially factor Xa inhibitors such as rivaroxaban, apixaban, edoxaban, betrixaban and dabigatran, come with their own set of challenges in terms of higher costs , risk factors and lack of a reversal agents in case of emergencies.

Most of the research efforts in the anticoagulation industry are now being directed at finding novel solutions to overcome the limitations posed by existing medication, with companies developing anticoagulant reversal agents using precision molecular modelling and using novel approaches like taurolidine technology, ELP technology etc.

Ticagrelor is an oral P2Y12 inhibitor that is used to reduce the threat of ischemic events among patients with acute coronary syndromes or myocardial infarction. The anti-palette effects of ticagrelor cannot be reversed with platelet transfusion, hence the need for a rapid-acting reversal agent.

The company recently completed a Phase I clinical trial of PB2452, the results of which were published in New England Journal of Medicine. The results show that PB2452, a monoclonal antibody fragment that can bind with ticagrelor and reverse its effects when administered intravenously, demonstrated immediate and sustained reversal of the antiplatelet effects of ticagrelor, as measured by multiple assays.

Phase Bio’s (NASDAQ: PHAS) proprietary ELP technology is based on the research and development efforts of its co-founder Ashutosh Chilkoti, PhD, Theo Pilkington Professor and Chair, Department of Biomedical Engineering, Duke University. His research on the design and synthesis of genetically encoded stimulus-responsive elastin-like polypeptides and their fusions with peptides and proteins has paved way for protein purification and drug delivery.

Its ELP platform is derived from recombinant biopolymers that consist of individual subunits or building blocks derived from a five-amino acid repeat motif found in the human protein elastin. This recurrent five-amino acid motif forms the ELP biopolymer. It enhances the circulating half-life of proteins and peptides and provides a sustained release mechanism from a single subcutaneous injection. In addition, it also improves solubility, stability and bioavailability and offers prolonged drug exposure. The company’s strategy is to use ELP technology in proteins and peptides with suboptimal half-lives to improve their pharmacokinetics. Its ELP-based products are developed by engineering E. coli to produce a single protein comprising the active peptide or protein fused to the ELP biopolymer.

Its second product candidate is PB1046, subcutaneously-injected, sustained release analogue of the native human peptide, vasoactive intestinal peptide (VIP) fused to an ELP biopolymer, which the company is developing as a once-weekly fusion protein for the treatment of pulmonary arterial hypertension (PAH). It has received two Orphan Drug Designations from the FDA for PB1046 for the treatment of PAH and Cardiomyopathy associated with Duchenne muscular dystrophy (DMD). The company is currently conducting phase II clinical trials to assess the safety, tolerability, and efficacy of PB1046 in patients with symptomatic PAH.

In addition, it is also exploring the possibility of using PB1046 for treatment of cystic fibrosis. Its preclinical programs include C-type natriuretic peptide (CNP), a regulator of bone growth that can correct defects in fibroblast growth factor 3 that cause achondroplasia resulting in dwarfism and Glucagon-like peptide-2 (GLP-2) that promotes the growth of intestinal villi , improving their ability to absorb nutrients for patients with Short Bowel Syndorme (SBS), Crohn’s disease or mucositis.

We feel that the company will leverage on the positive clinical/regulatory outlook to accelerate the commercial launch of PB2452, which is the need of the hour. The company is likely to develop PB2452 first to fund the development of PB1046, its in-house drug candidate. An estimated 1.5 million patients take ticagrelor as part of the treatment of acute coronary syndrome (ACS), but are at an increased risk of major bleeding events owing to prevention of the blood from clotting. The Breakthrough Therapy designation will allow the company to receive intensive guidance from FDA senior managers besides accelerated approval and priority review, making it the first approved reversal agent for ticagrelor, if approved.

PhaseBio (NASDAQ: PHAS), is a clinical-stage biotechnology company that was founded in 2002 and is headquartered in Malvern, Pennsylvania. The company is developing novel therapeutics to treat rare cardiopulmonary diseases.

It  is headed by Jonathon Mow, its Chief Executive Officer with more than 25 years of experience in biotechnology management. The companies preclinical and CMC (Chemistry, manufacturing and controls) are being led by Susan Arnold, PhD who serves as the Vice President. Jim Ballance, PhD is the vice president of research and scientific affairs and has more than 25 years of experience in the biopharmaceutical industry.

- A Potential Disruptor In The Micro-Endoscopic Device Market

- Can Celsion Hit the Bullseye with GEN-1?