Research in Clonidine shows promise in the treatment of Sciatica 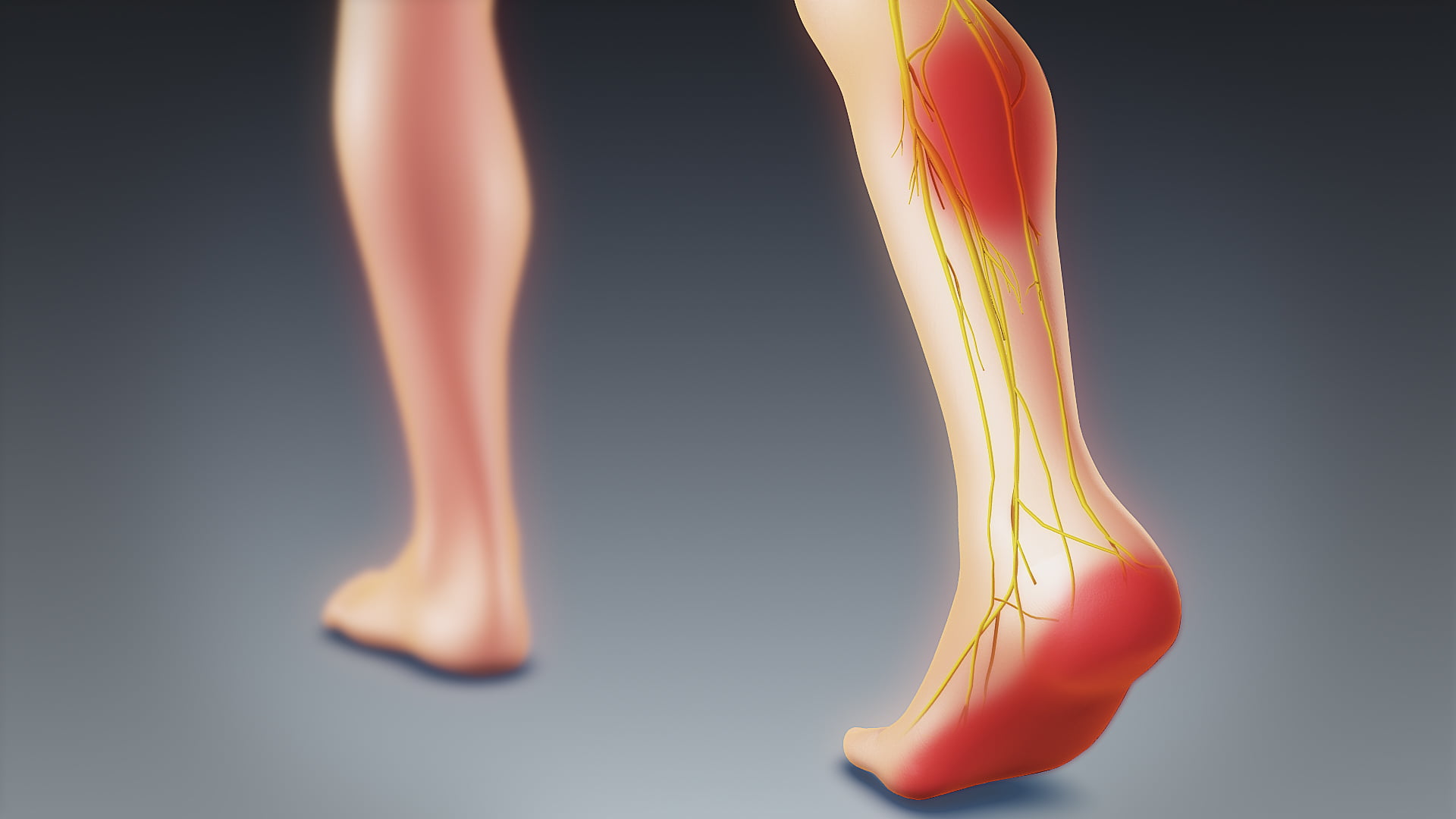 Sciatica also known as lumbosacral radiculopathy or radicular leg pain is a chronic pain condition that affects approximately 1 in 20 adults each year with over 40% of people likely to suffer from sciatica during their lifetime. A herniated vertebral disc is the most common cause of sciatica with other reasons being spinal stenosis, tumors and other structural issues with the spine. Sciatica is characterised by extreme pain and inflammation.

Conventional treatment options such as non-steroid anti-inflammatory medications or physical therapy is the first course of remedy, which is successful in treating almost two thirds of the cases. However, there is no remedy for the rest who suffer from chronic pain. Existing treatment options include an off-label injection of epidural steroids administered at the site of disc injury, opioids, oral steroids, and surgery.

These are not only ineffective to a large extent but also have severe side-effects such as disruption of blood glucose, increased risks of systemic infections, and psychiatric effects such as anxiety, sleeplessness and opioid addiction.

Analgesics constitute the second largest market in the world with estimated global annual sales of $82 billion in 2015. According to a report by Technavio, the global sciatica treatment market size will grow by USD 5.82 billion during 2019-2023, owing to a rising geriatric population, obesity, spondylolisthesis, osteoarthritis and occupational injuries that increase the risk of sciatica.

We take a look at few companies which are the forefront of introducing novel mechanisms and therapeutics for the treatment of sciatica.

The company, a subsidiary of Scintilla Pharmaceuticals, recently announced a merger with Semnur Pharmaceuticals in March 2019, creating a world leader in non-opioid pain management with commercial and late stage products. It will now develop Semnur’s Phase 3 SP-102 (Semdexa ™), which received a FDA fast track designation, and is a synergistic match to its existing commercial infrastructure. SP-102 is currently undergoing crucial Phase 3 trials with data readout expected in the first half of 2020. 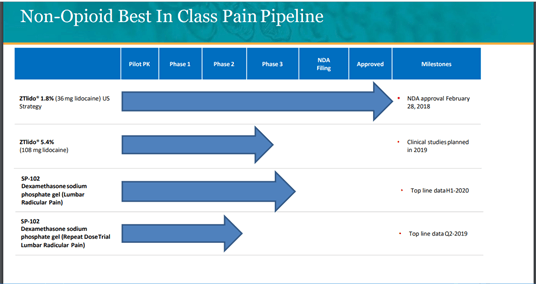 SP-102 is a novel gel formulation that can be administered in the form of an epidural injection with characteristics such as a unique biocompatible excipient with extended effect. If approved, this would be the first FDA-approved epidural steroid product. The product has already demonstrated an improved safety profile over existing compounded steroids in clinical trials. 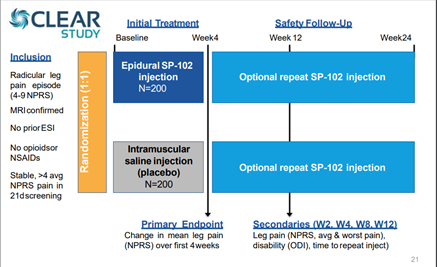 It plans to file a New Investigational Drug application (NDA) for SP-102 in the second half of 2020 in addition to entering potential collaborations or licensing in ex-U.S. territory in 2019-2020. The SP-102’s method of use and application enjoy patent protection until 2036 along with a 20-year exclusive supply agreement in place for novel excipient.

The company’s in-house drug candidate ZTlido (Lidocaine topical system 1.8%), is a branded topical-lidocaine patch aimed at the treatment of pain in PHN, which was launched in the U.S market in October 2018.

Novassay is a swiss-based biotechnology company engaged in the research and development of Ion Channels for creating therapeutic solutions in the fields of neuropathic pain and oncology. It is not only developing in-house drug candidates but also in-licensing promising drug candidates from others. 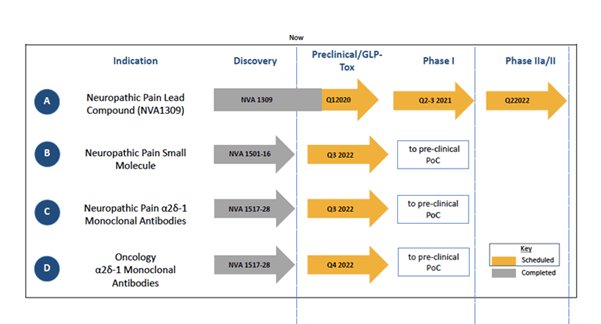 The company is engaged in creating non-opioid and non-steroid pain medication. Its lead candidateSTX-015, aimed at the treatment of sciatica, is an extended-release analgesic that can be placed into the lumbar epidural space. It is currently enrolling patients for its Phase III clinical trial named RePRIEVE-CM for radicular leg pain (sciatica).

Sollis was formed from the seed-funding received from the Neurotechnology Innovations Translator (NIT), Ohio; In addition, it has also received a grant from Ohio Opioid Abuse, Prevention and Treatment Technology Initiative for development of STX-015.

STX-015, is an extended-version of clonidine, an alpha-2 agnosit, that acts as an analgesic and anti-inflammatory medication also referred to as “clonidine micropellet”, that allows for targeted administration of clonidine resulting in reduced inflammation and pain. The drug is to be delivered using a simple, one-time, epidural injection.

Its two-pronged approach acts by firstly blocking pain signals from travelling to the brain, thereby providing immediate relief, and secondly it prevents the inflammation cycle from progressing into chronic pain.

In addition to treating sciatica, clonidine has also been found effective in the treatment of hypertension, ADHD and providing analgesic relief in end stage cancer.

The company received over $50 million in funding in April 2018, from Deerfield Management, alongside additional co-investors.

The company’s lead candidate for the treatment of sciatica, VVZ-149 (Lidocaine) is currently undergoing Phase 1b/2a clinical trials in the U.S with patient enrollment under progress to test the Safety and Analgesic Efficacy of VVZ-149 in Lumbar Radiculopathy (Sciatica). It was granted a FDA fast track designation in November 2018, through regulatory support from MMS Holdings Inc. (MMS) .

It uses its proprietary “Ex Vivo Phenotypic Screening Technology to identify safe and efficacious drug candidates through its “Bait Target Approach”. The drugs so chosen are designed to share the key structural feature with known compounds that interact with the selected targets. Using this technology, Vivizon has identified two developmental candidates, VVZ-149 and VVZ-368, antagonists against both GlyT2 (the bait target) and 5HT2A. 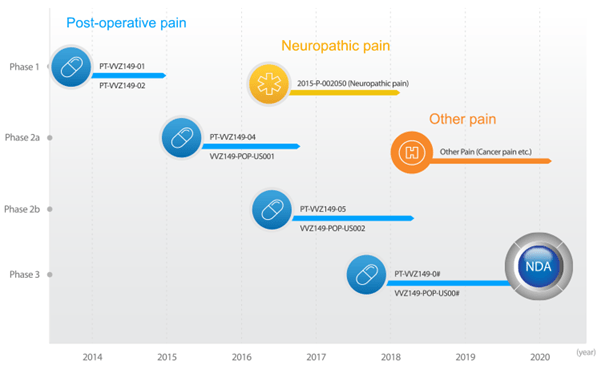 VV-129 is a non-narcotic non-NSAID analgesic that offers the same pain-suppressing efficacy as formalin along with anti-itching effect. These are a result of the synergistic dual antagonistic activity of VVZ-149 against GlyT2 and 5HT2A that act as key receptors for the transmission of the pain signal in spinal dorsal horn area and/or peripheral sensory neurons.

The company established Vivozon USA, owned 100% by Vivozon, to advance the drug candidate further. It will be responsible for initiating the multi-national phase 3 studies. It is currently exploring business opportunities for clinical development, global market access, drug commercialization, out-licensing and fund raising.

- 5 Small Cap Tech Stocks to Boost your Portfolio in 2021