3 stocks to Avoid At All Costs 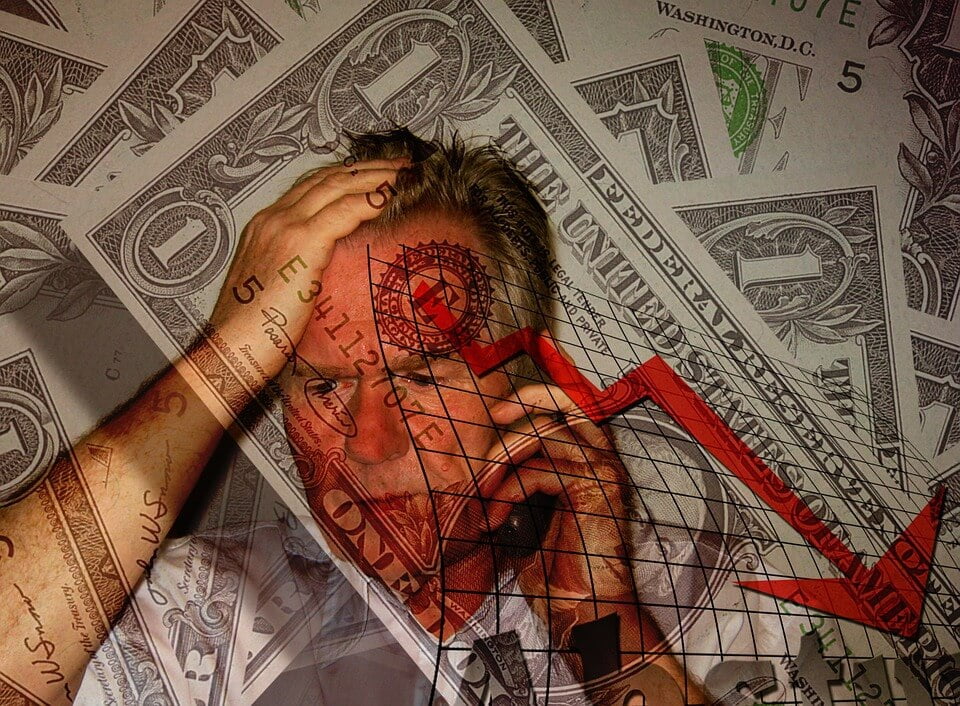 02 Feb 3 stocks to Avoid At All Costs 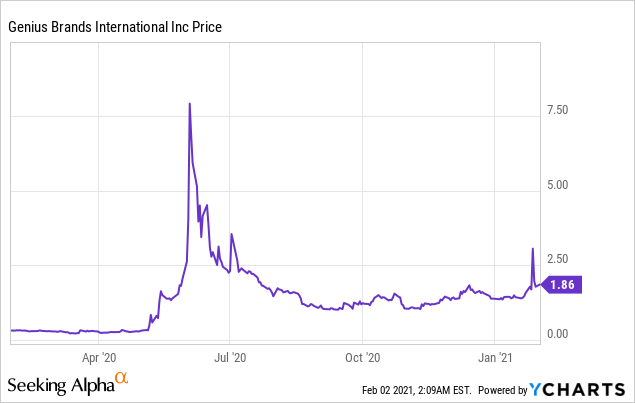 In December 2020, the Company announced a deal with LG Electronics USA to offer Kartoon Channel! for free across all LG Smart TVs, making it the Company’s second partnership with a television manufacture, after its recent alliance with Samsung, to make Kartoon Channel! available across all Samsung Smart TVs. In November 2020, the Company acquired ChizComm a marketing and media agency that represents over 30 toy companies (including MGA Entertainment, Jakks Pacific and Jazwares) and ChizComm Beacon Media, its media research, planning and buying division. Furthermore Shaquille O’Neal bought a stake in Genius Brands and will produce and star in a new animated comedy for the kids named Shaq’s Garage.

In June 2020, the Company signed a joint venture deal with Stan Lee’s POW! Entertainment, to acquire the name and post-Marvel IP and create a Stan Lee universe, as per an announcement by the Company. However this move has raised questions about the logic behind acquiring lesser known characters such as Tomorrow Men, Stringbean, and Virus, which may not be easily identifiable by their audience. Marvel has already acquired the IP to most of Stan Lee’s popular characters such as Iron-Man, Hulk, Spiderman etc., through a $4 billion deal in 2009.

The company undoubtedly has managed to gain contracts with some noticeable platforms such as its Rainbow Rangers show on Nick Jr and its preschool program Llama Llama on Netflix, however despite promises of significant growth, there hasn’t any tangible revenue growth and an increasing operating, sales and marketing and general and administrative expenses, add to the concerns. In August 2020 two class action suits were filed against the Company for alleged manipulative and deceptive practices by the Schall Law Firm as well as Bronstein, Gewirtz & Grossman, LLC.

The Company’s stock catapulted to nearly $12 from a mere 30-cent in June 2020 on its vision of becoming “netflix for kids” and the launch of its Kartoon Channel. However, Genuis could not capitalize on the pandemic fuelling the demand for kid’s content, as children are confined to homes but still have online classes to deal with. In addition, the execution of the vision to become the next nextflix presents various challenges such as competing against Disney (NYSE: DIS), Amazon (NASDAQ: AMZN) and Netflix that spend billions on making kids content, create captivating content that can attract and retain the young audience and most importantly abide by data protection laws which restrict targeted advertising for kids.

Though its idea of becoming an ad-supported streaming-video-on-demand (AVOD) platform has great merit and potentially huge rewards but its ability to execute the idea and bring it to fruition is questionable. 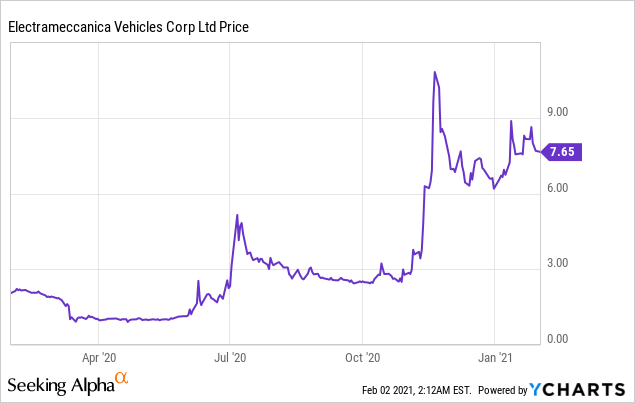 The SOLO has a 100-mile range & 80-mph speed making it an ideal commute vehicle, the vehicle is economically priced at around $18,500., has lower maintenance and operating costs and is environmentally friendly. The Vehicle caters to the needs of daily commuters, packages and food delivery and lends itself to shared mobility in form of hotels or shared rides. However with the prolonged pandemic forcing more and more people to work from home, a trend that is likely to become the norm, the appeal of a compact 1 seater -commuter car may no longer be as attractive. The design has faced criticism and has been compared to a motorcycle on three wheels minus the convenience.

The Company already has two manufacturing sites, one in Vancouver Canada and another in China through a strategic contract manufacturing partnership with Zongshen Industrial Group, China’s largest motorcycle manufacturer and an early investor in the Company. The Company is planning to build another factory in the United States and is looking at sites in Tennessee and Arizona as possible locations.

According to the Company, 64 Gen-1 SOLO’s  have been hand-built by Electra Meccanica’s Vancouver Facility and another 50 produced by Zongshen as part of its pilot production and are already on the roads in US, China and Canada as part of validation testing. However these are being used for “press events, marketing, retail distribution, test drives, corporate and advertising purposes as well as fleet demonstrations.” The Company has been making losses, with its Q3, 2020 loss standing at CAD 14.9 million. This number is almost three times its loss of CAD 5.3 million in2019 or a 181.1% increase. The Company has missed its EPS estimates inn three of the four trailing quarters and is expected to decline 100% in the current quarter ending March 31, 2021.

Electrameccanica plans to start rolling out its vehicles for customer in early 2021, and will face very tough competition from Companies like Tesla (NASDAQ: TSLA), Nikola (NASDAQ: NKLA) and other electric vehicle manufacturers, especially since it caters to a niche. 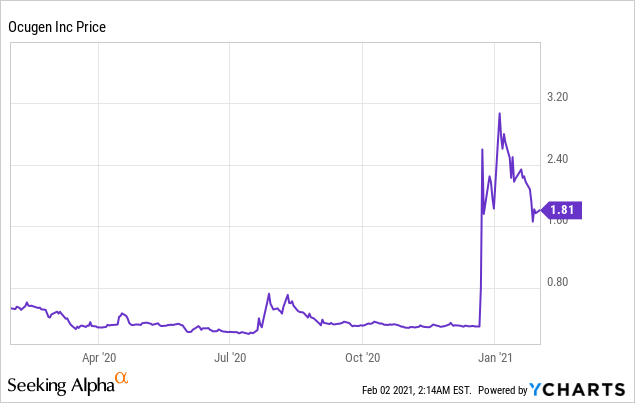 Covid-19 has bought many biotech Companies into the limelight, all promising a possible solution to the pandemic that has disrupted lives worldwide. Occugen’s shares catapulted after news of the Company signing a binding letter of intent (LOI) with Bharat Biotech became public. The agreement will see the companies co-develop Bharat Biotech’s COVAXIN for the U.S Market. The vaccine candidate has already obtained an emergency use authorization in India and has demonstrated efficacy in Phase 1 and 2 clinical trials in India, while currently conducting a phase III clinical trial with 26,000 subjects.

Ocugen will hold the U.S rights for the candidate, however there are many challenges before the Company, as there are already two approved vaccines in the U.S, with more on the way. There is a large market for these vaccines worldwide but to be able to make inroads into the market, Covaxin will have to show that it is as effective as or even better than these already approved products to make any tangible impact. There are new strains emerging like the ones in U.K and South Africa and there is a possibility that the Vaccines that work on one variant may not work on the other.

The biggest challenge for the Company will be to compete with giants like AstraZeneca (NASDAQ: AZN) and Pfizer (NYSE: PFE) for a share of the market. These companies already have agreements in place for the supply of their vaccines with governments around the world, while Ocugen currently has none. Most importantly these companies have deep pockets, developmental, regulatory and marketing expertise to fix any issues that may arise on the way, while Ocugen is still a clinical-stage company with a pipeline consisting of candidates yet to reach clinical testing stage. In June 2020, the Company discontinued the Phase 3 trial of OCU300, its lead candidate for ocular Graft vs. Host Disease (oGVHD). The other candidate in its pipeline are OCU400 (inherited retinal diseases), OCU410 ( Dry AMD) and OCU200 (Diabetic Macular Edema).

FDA approval for the new vaccine will only be granted on completion of a phase 3 trial conducted in the U.S, which may be a difficult task to accomplish for the Company as it has only $19 million in funds as per its financial results.