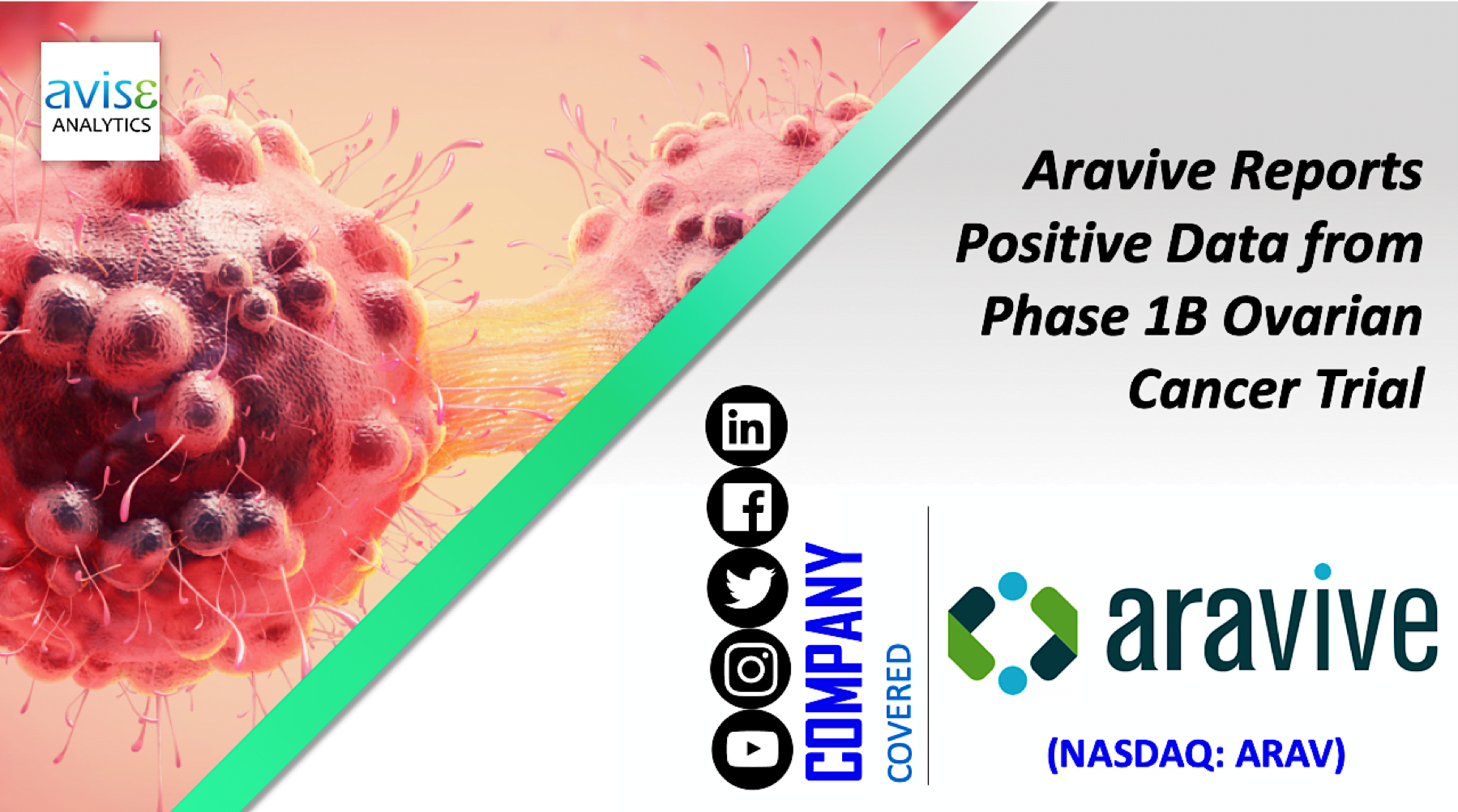 Posted at 11:20h in Biotechnology by admin 0 Comments
0 Likes
Share

Aravive, Inc. (NASDAQ: ARAV), a clinical stage biotechnology Company engaged in developing therapeutics for solid tumours and hematologic malignancies, announced positive data from its ongoing Phase 1b/2 study of AVB-500, intended for treatment of Ovarian cancer patients. The results were presented at the European Society for Medical Oncology (ESMO) Congress in Barcelona, in a late breaking oral presentation as per a Company statement.

AVB-500 is a recombinant fusion protein that has the potential to bind to GAS6 and neutralize its activity. It also selectively inhibits the GAS6-AXL signalling pathway, which has been shown to correlate to therapeutic resistance, poor prognosis and survival rates. AVB-500 has demonstrated anti-tumour activity on its own as well as in combination with other anticancer therapies. Buoyed by the positive results from the 1b portion of the study, the Company is now enrolling the expansion cohort. In addition, the Company is also engaged in an investigator-studied Phase 1 trial of AVB-500 in combination with durvalumab in patients with platinum-resistant, recurrent epithelial ovarian cancer.

Furthermore, AVB-500 has shown positive results in a Phase 1 clinical trial studying its safety, pharmacokinetics, and pharmacodynamics along with a clinical proof-of-mechanism. The FDA has granted a Fast Track Designation to AVB-500 for the treatment of platinum-resistant recurrent ovarian cancer in 2018.

The Phase 1b portion of the trial enrolled 12 patients in two cohorts, one was administered a combination of AVB-500 with pegylated liposomal doxorubicin (PLD) and the other was given a combination with paclitaxel (PAC). In both the groups AVB-500 demonstrated overall best response rate (ORR), met the investigator determined RECIST v1.1 criteria and showed durable response. Additionally, the drug was well –tolerated with no dose limiting toxicities (DLT).

The Company is using Model-Informed Drug Development (MIDD) to evaluate higher drug doses in phase 1b, and arrive at the optimal drug dose for AVB-500. The study has also established an exposure-response relationship prompting the Company to study higher doses of the drug in the expansion cohort.

Aravive plans to announce the results from the initial 30 patients on the current 10 mg/kg dose by the end of 2019, and will decide on a regulatory strategy based on the inputs from the trial. The confirmation of exposure response relationships allows the Company to pursue an accelerated regulatory pathway for AVB-500 with the FDA. 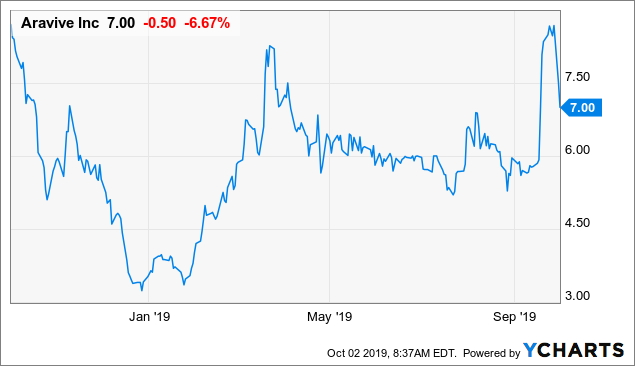 The American Cancer society estimates that in 2019, there will be around 22,530 new diagnoses of Ovarian Cancer and 13,980 women will succumb to the disease. It is the fifth largest cause for death in women, with over 1 in 78 chances of acquiring this disease during one’s lifetime.

The risk factors include menopause-related hormone therapy, obesity, delayed pregnancy, fertility treatments, and a family history; lynch syndrome, inherited BRAC genetic mutations to name a few. Currently, there are no definitive screening tests available for ovarian cancer, which acts as an impediment for early detection and treatment. TVUS (transvaginal ultrasound) and CA-125 blood test are used to detect ovarian cancer, but are unreliable and ineffective.

According to a report by Grand View Research, the global ovarian cancer drugs market is expected to reach USD 4.5 billion by 2022, growing at a CAGR of 23.7%. A rising geriatric population coupled with improper lifestyle habits is fuelling the growth in the market. Scientific advancements such as non-platinum based PARP inhibitors, VEGF inhibitors, and development of biologic or small molecule therapies are changing the treatment landscape. We take a look at some companies that are leading the innovation bandwagon in this area.

Aravive’s lead candidate for the treatment of Ovarian Cancer is AVB-500, an ultra-high affinity decoy protein that binds to GAS6 and inhibits the GAS6/AXL signalling pathway, which is primarily responsible for cell migration in cancer and fibrosis. The Company previously announced preliminary data from an ongoing Phase 1b/2 trial of AVB-500 in patients with platinum-resistant recurrent ovarian cancer, which showed a significant anti-tumour activity. It is intended to be used either as a standalone therapeutic or in combination with other anticancer therapies.

The focal point of Aravive’s research is GAS/AXL signalling pathway, which has shown to fuel cell migration in cancers, in addition to contributing to disease progression and mortality.

The Company’s novel approach targets the GAS6 ligand as against the traditional approach of focusing on the AXL signalling molecule, which has led to multiple failed attempts owing to undesirable side effects and inability to suppress the affinity of GAS6 to AXL. In fact, in preclinical studies, AVB-500 has demonstrated a 200-fold higher affinity for GAS6, thereby making it an ideal candidate for disrupting the AXL/GAS6 pathway. 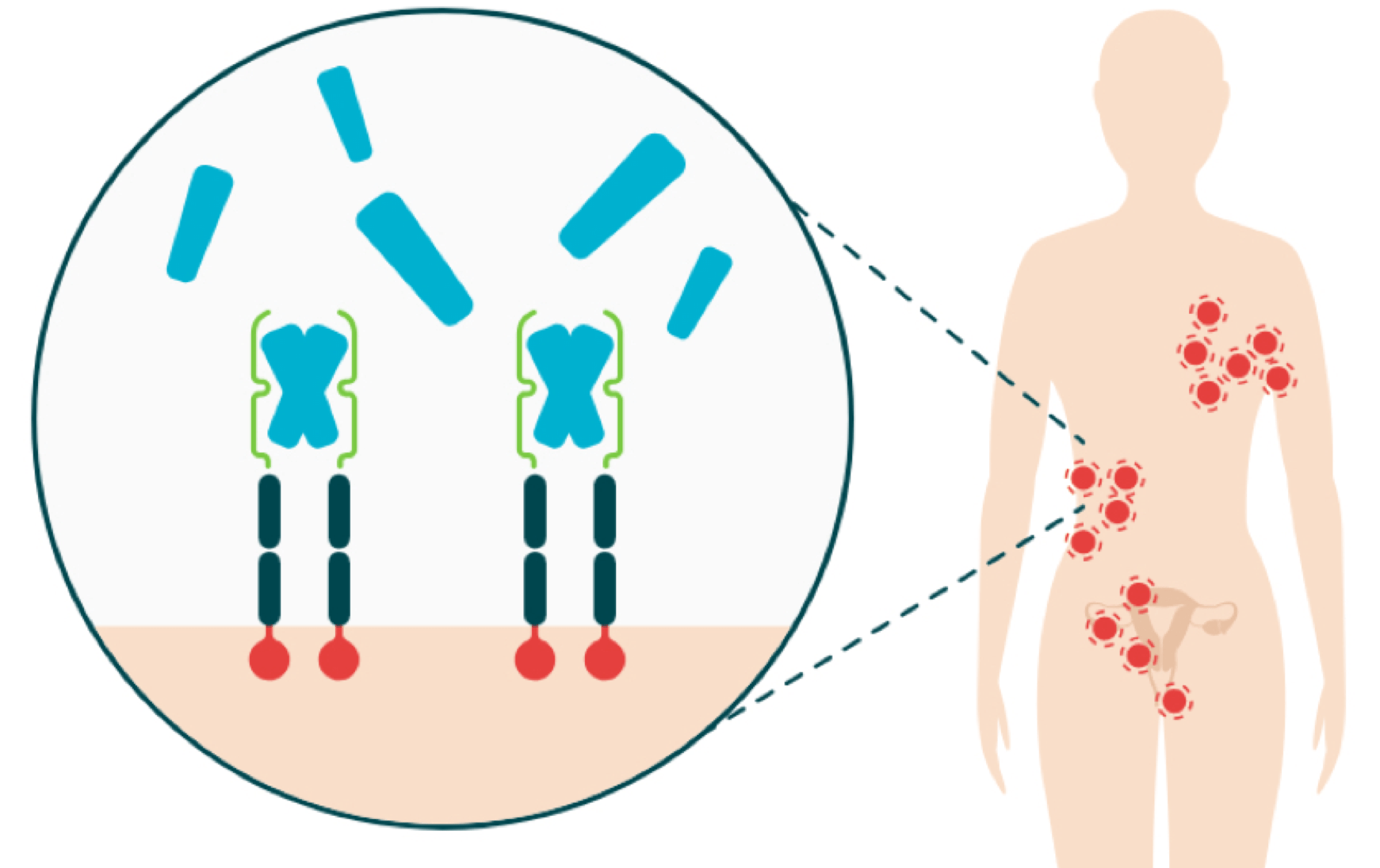 The Company has plans to extend the application of AVB-500 to other indications such as kidney fibrosis and IgA nephropathy. The positive results have provided an impetus to the Company to explore the feasibility of biomarker-driven individualized dose adjustments, and also explore the possibility of inculcating the exposure-response information, into clear cell renal cancer and renal fibrosis trials.