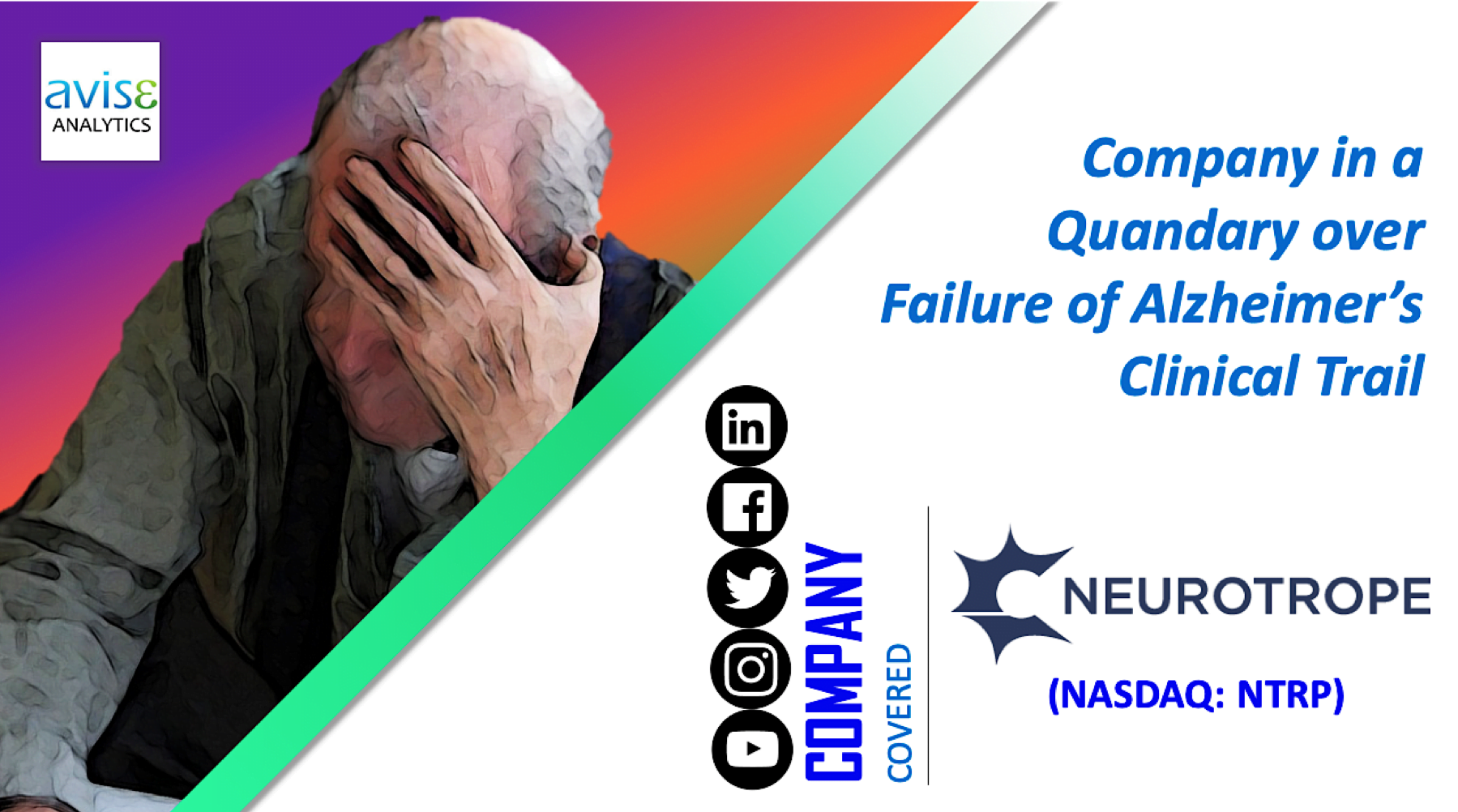 Posted at 11:53h in Biotechnology by admin 0 Comments
0 Likes
Share

Neurotrope Inc, (NASDAQ: NTRP) announced a setback, with Bryostatin, its lead candidate for the treatment of Alzheimer’s, failing to meet its clinical endpoints of its mid-stage study. The Topline results from the confirmatory Phase 2 study of Bryostatin-1, in moderate to severe Alzheimer’s, failed to achieve statistical significance on the primary endpoint of a change in the Severe Impairment Battery (SIB) total score.

The clinical study was a phase 2 multicenter trial, intended to assess the safety and efficacy of Bryostatin-1 for patients with cognitive deficits in Alzheimer’s. The patients were divided into two groups in the ratio of 1:1 and treated with 7 doses of either Bryostatin-1 20μg or a placebo over 12 weeks. The drug showed no significant improvement in the SIB score from baseline to week 13, when compared to those treated with a placebo. 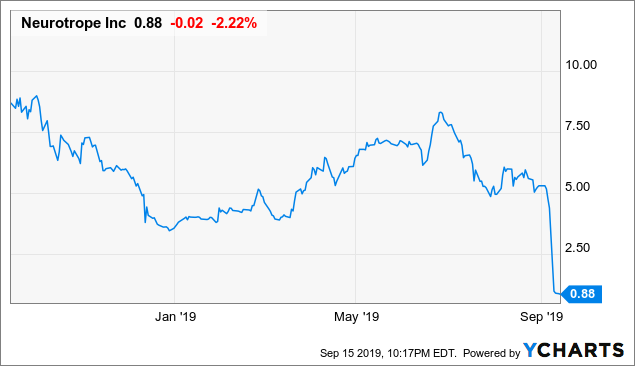 “We are disappointed in the topline results from the confirmatory Phase 2 study. Having just received the data, we are conducting a full review to determine potential next steps and will provide an update of our plans when appropriate. We sincerely thank the patients, physicians, study coordinators and the entire Neurotrope team for their support of this novel study.”

This is the second time in two years that the drug has failed to meet its clinical endpoints. In May 2017, the company announced that an exploratory study in 147 patients with moderate-to-severe disease over a twelve week period, out of which 113 patients completed the study, showed “very modest efficacy” as compared to a placebo. The study involved administration of two doses of Bryostatin-1 versus a placebo, along with standard treatment.

Neurotrope’s approach was deemed promising as it was focusing on stimulating synaptic growth factors, amyloid-beta degrading enzymes, and preventing Tau transformation into neurofibrillary tangles, as opposed to the conventional approach of focussing on accumulation of beta-amyloid in the brain.

Alzheimer’s is the sixth leading cause of death in the U.S, a disease that causes irreversible degeneration of the brain cells, and affects a person’s cognitive and behavioral abilities such as impaired judgment, deteriorating memory and personality changes with the gradual loss of motor abilities and speech. 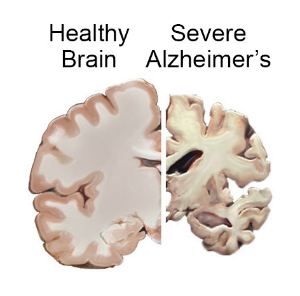 A report by transparency market research predicts that the global market for Alzheimer’s will reach US$6.4 billion by 2025, growing at a CAGR of 7.5%, from US$3.6 billion in 2017. The rise in ageing population, increased awareness about the benefits of combined therapy, a favorable regulatory and government support environment are some of the factors that will contribute to the growth of the market. The economic burden of the disease on not only the patients but also caregivers will act as an impediment for the market. The prohibitive cost of expensive treatment especially in developing nations is another obstacle for growth.

Bryostatin-1, a small molecule that helps in protein kinase C (PKCϵ) activation, is the company’s lead candidate for the treatment of various neurodegenerative disorders such as Alzheimer’s, Niemann Pick Type C and Fragile X Syndrome. The candidate is capable of stimulating synaptic growth factors, amyloid-β degrading enzymes and can prevent Tau transformation into neurofibrillary tangles.

The company’s research efforts are focused on PKCϵ, which plays a crucial role in learning and memory. In preclinical studies, Bryostatin has demonstrated the ability to improve synaptic functions, facilitate new synapse formation, repair damaged synapses and prevent apoptosis and neuronal death. This is achieved by penetrating the blood brain barrier and activating the PKCϵ. 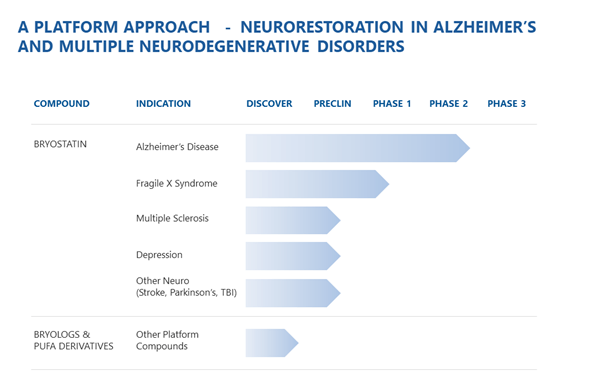 The company’s pipeline is also targeting other disease areas with large unmet needs such as Parkinson’s Fragile X Syndrome, Multiple Sclerosis and Depression.

What’s next for Neurotrope?

Alzheimer’s is one area, where innumerable attempts that have been made to find a cure with no success. According to a report released by Pharmaceutical Research and Manufacturers of America (PhRMA) from 1998 to 2017 there have been about 146 failed attempts at developing drugs for Alzheimer’s disease. Previously companies such as Astra Zeneca, Roche (OTCQX: RHHBY), Merck & Co (NYSE: MRK) and Eli Lilly (NYSE: LLY) have all failed in their attempts to develop a drug for the treatment of this disorder.

The company’s pipeline is heavily reliant on Bryostatin, which is being developed for the treatment of multiple indications such as Fragile-X syndrome, Multiple Sclerosis, Depression and other neurological disorders. The failure of the drug to meet clinical endpoints for Alzheimer’s raises concerns over the drugs future prospects as well.

As per its Second quarter 2019 financial results, the company reported $21.2 million of cash and cash equivalents, which it believes will help fund operations through at least 2021. The company will need to find a licensing deal or partner for advancing its clinical pipeline, which may now face some difficulty owing to the failure of its trial.

However it may still be able to redeem itself and bounce back, if it can come up with positive results from its Fragile X Syndrome trials, laying to rest concerns about Bryostatin’s efficacy and viability.

- Will Surgalign Holdings New Acquisition Bolster its Position as a Pure-Play Spine Company?