ReWalk Raises $5M for its ReStore Exosuit for Stroke Victims 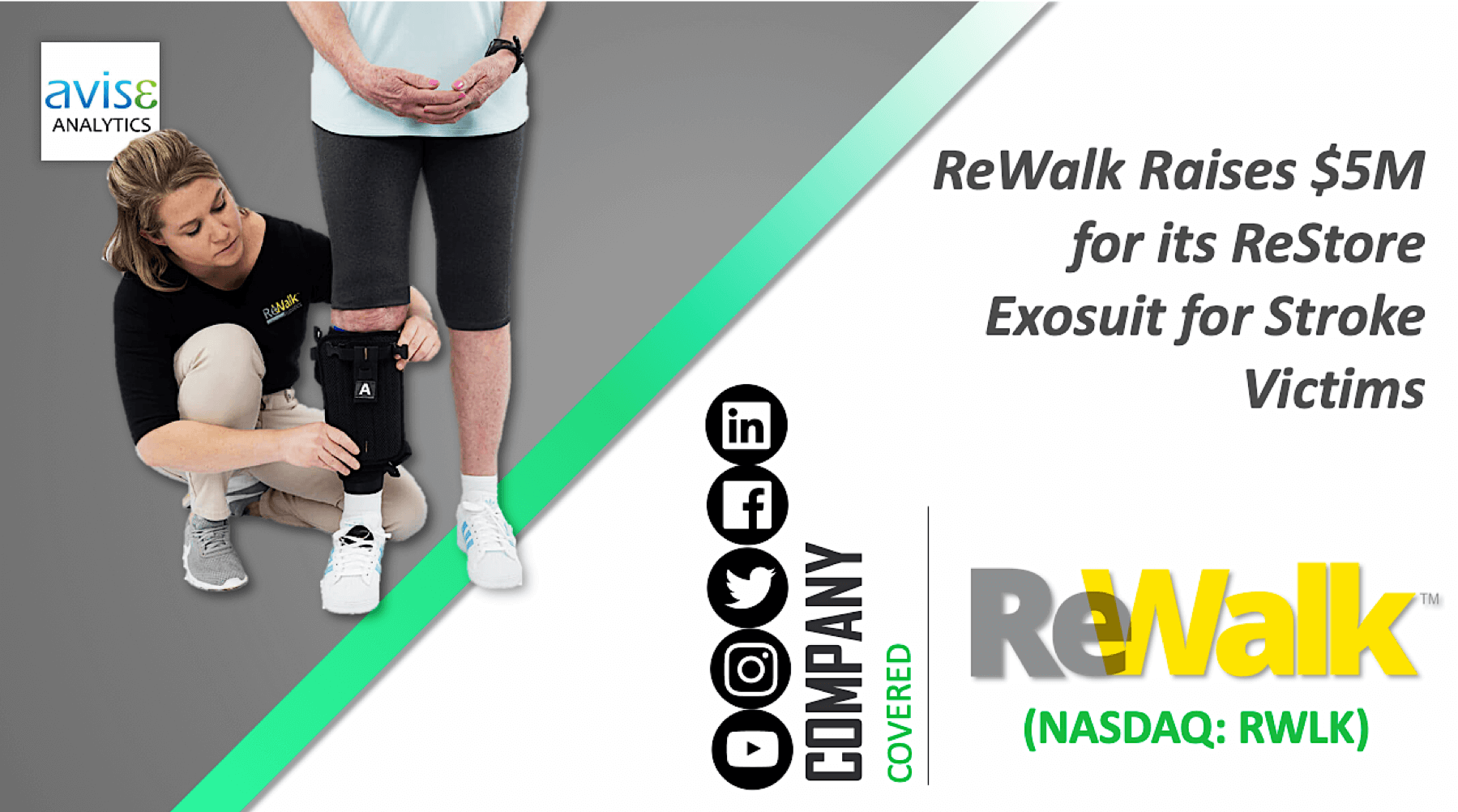 ReWalk Robotics (NASDAQ: RWLK) recently received an approval for its ReStore exoskeleton system, indicated for rehabilitation of stroke victims, from the FDA. The company also manufactures ReWalk robotic exoskeleton, the first to receive FDA approval for personal and rehabilitation use in the United States. It also offers ReWalk Rehabilitation for use in clinics for exercise and therapy. Its aim is to develop robotic technology that can improve the quality of life for stroke victims, paraplegics, people with lower limb disability and spinal cord injuries. The product has also received a CE mark, the first clearance of a soft exo suit for stroke rehabilitation in the European Union.

The news holds great significance as it makes ReWalk the first product to get an approval from the FDA, for a wearable exoskeleton for patients suffering from stroke, and will possibly act as a game changer for the exoskeleton industry. The technology was acquired by the company from Harvard in 2015, and in just four years, it has leveraged its regulatory and clinical development expertise to bring the product to a quick turnaround. In the words of ReWalk’s CEO, Larry Jasinski,

“Given the high frequency of stroke and the need for more effective and economical clinical solutions, the market for ReStore is substantial. The reasonable price of the device and the multiple uses that it offers make it an attractive solution for wider variety of rehabilitation uses than previous technologies.”

ReWalk had already started training its sales force in anticipation of an FDA clearance and has a leasing system in place through a vendor, which would allow clinics to acquire the ReStore Systems at $28,900 or lease them at $1,140 per month. The company expects rapid growth with ReStore System, with an estimated 100 Tier 1 centres initially and gradually expanding its presence to other smaller centres. In addition the company is looking at diversifying, by working on systems that can used by those suffering from Parkinson’s and Multiple Sclerosis. 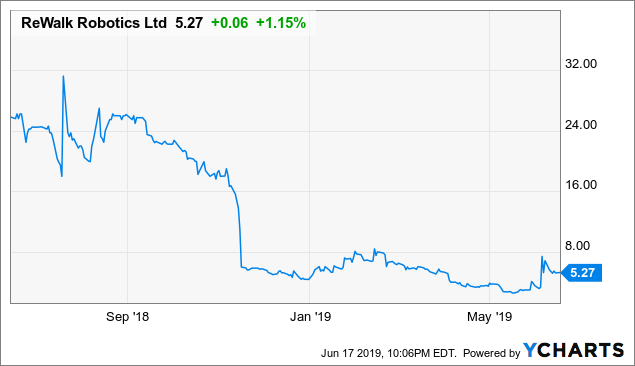 The company successfully closed a direct offering to institutional investors, of over 833,334 shares at $6.00 per share, for a consideration of $5 million in gross proceeds, which it intends to use for funding ReStore’s sales and marketing efforts as well as expanding its third-party payor coverage. Additionally, it is also offering warrants to purchase up to 416,667 shares. In fact ReStore suits are likely to get an extensive insurance coverage, as companies already cover treatment for strokes and rehabilitation and gait training as well. It will also help cover the research and development costs for its proposed lightweight exo-suit technology for lower limb disabilities.

It uses a patented motion sensing technology that is controlled by on-board computers and software and can be operated by individuals independently to walk, stand upright and turn. 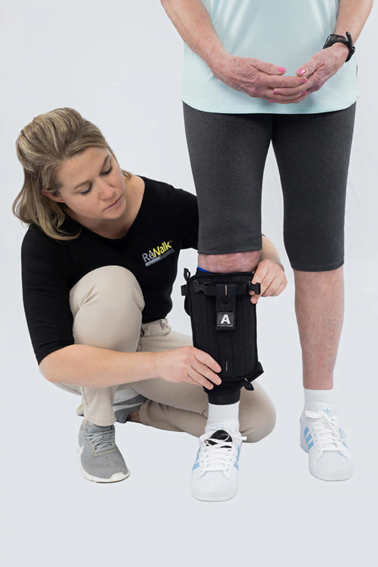 The ReStore is a customizable exoskeleton that offers safety along with optimal functioning. It is a powered lightweight soft exo-suit, which combines natural movements with plantarflexion and dorsiflexion assistance, and can sense the motion of the body to generate steps and mimic a natural gait along with controlling changes in the centre of gravity. The system also provides real-time feedback that can help track and customize each patient’s progress.

The company also offers comprehensive reimbursements, maintenance and warranty programs. It has training centres worldwide that can assist an individual in getting accustomed to the system.

Stepping up its game

Its other product offerings include ReWalk Rehabilitation meant for clinical use for patients in need of therapy and exercise. It is customizable to suit individual patients and can be controlled by the therapist by means of a graphic user interface that allows providing inputs on various parameters. The company offers a WW training standards program for the rehabilitation team to familiarize them with the technology.

The company has seen a positive response from numerous regulatory and insurance agencies, which have modified their policies to allow for the coverage of exoskeletal systems such as U.S department of Veteran Affairs which has expanded access to ReWalk for paralyzed veterans. It has also received coverage under the German Statutory Health Insurance Funds, Italian Ministry of Labor and Social Policy’s statutory insurance corporation (INAIL) to name a few. The company recently celebrated a milestone of placing its 500th exoskeleton system in November 2018.

Outlining the company’s vision, in an interview with the WBJ, ReWalk CEO, Larry Jasinski, stated that

“ If you’re trying to drive a company with the mindset of breaking even or profitability – we have the ReWalk with modest growth, and are expecting rapid growth with the ReStore – that’s the path to a sustainable company”

Robotic exoskeletons have emerged as a boon for people who suffer from debilitating spinal cord injuries or paraplegia.

Paralysis is a widespread disability that affects 1.7 percent of Americans, with over 5,357,970 people living with some form of paralysis according a study conducted by the Centres for disease control and prevention (CDC) in association with 14 leading universities and medical centres. A research study estimates that there are nearly 5.4 million people living with paralysis between the ages of 18 and 64 years. 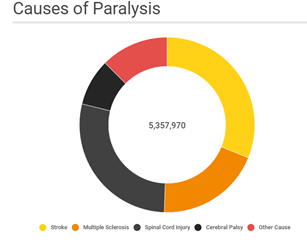 The Global Exoskeleton industry which was valued at $220 million in 2018 will reach over $3.5 billion by 2026 according to a report by Global Market Insights, Inc.

The increasing incidences of Ischemic stroke-induced paralysis, spine related injuries owing to motor accidents, workplace injuries, stroke and cancer related motor disability along with hyperextension of the spine and vertebral dislocation are spurring the growth in the market. There has been an increasing regulatory support to reduce spinal cord injuries (SCI); this coupled with scientific advancements in the robotics operated exoskeleton market as well as stem cell research will help the market grow.

The biggest challenge with existing exoskeleton systems are issues related to prohibitive costs, bulky weight, size, speed, and efficiency. There are stringent government regulations and regulatory framework that a company has to adhere to in order to prove the efficacy of its devices. Tetraplegia affects 55% of the SCI population, but the currently approved devices can only cater to people with C7 and below SCI as they lack the hand functions to handle the devices.

Another limitation is that existing exoskeletons cater to those with a body weight of less than 220 lbs or 100 kg; this will preclude those who are obese from making use of the technology. Also a person is required to achieve hip extension range of motion within 10-15 degrees and knee extension with less than 10 degrees flexion in supine or standing position with ankle joints in neutral position to be qualified to use the device which further limits the people eligible from using it.

This is set to change as companies like ReWalk are revolutionizing the treatment options for paraplegics by their path-breaking innovations to create improved exoskeleton support.

We believe that the company can carve a niche in the exoskeleton industry, with its cutting-edge products, and its ability to constantly innovate to offer new products in areas with large unmet medical needs.