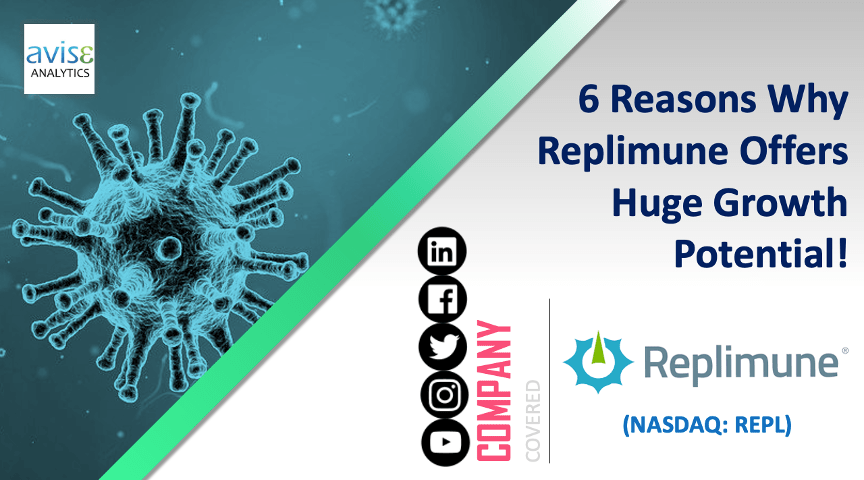 Posted at 10:34h in Biotechnology by admin 0 Comments
3 Likes
Share

Replimune group, Inc. (NASDAQ: REPL) is leveraging the power of its proprietary Immulytic platform to create a leading-edge oncolytic immunotherapy program that can generate a patient-specific local as well as systemic immune response. The therapies not only fight against the current cancer but also eliminate the chance of a relapse. The Company’s drug candidates are being evaluated in multiple ongoing clinical trials, as single agents and in combination with other immunotherapies to treat a host of solid tumors such as cutaneous squamous-cell carcinoma (CSCC), Lung Cancer, Melanoma and Solid Tumors among others.

The Company’s Immulytic™ platform seeks to combine multiple mechanisms of action that not only result in killing tumors and promoting systemic anti-cancer immune responses, but also generate a systemic anti-cancer vaccination in those undergoing treatment. This unique approach consists of a newly-isolated strain of herpes simplex virus (HSV) that acts as a backbone for its therapies. In addition, the use of a fusogenic protein promotes innate and adaptive immune responses, while also delivering additional proteins to improve anti-tumor immune response. 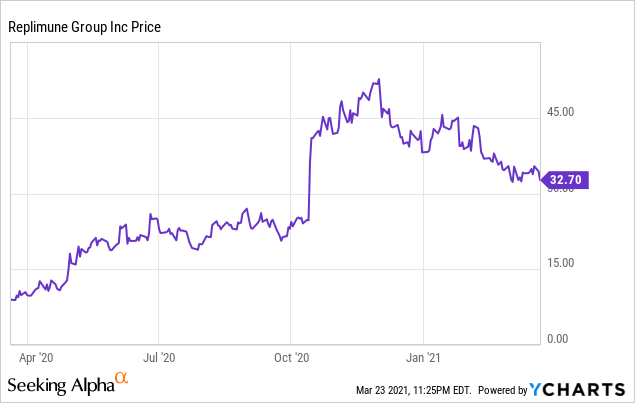 The Company’s pipeline consists of RP1, an Engineered HSV backbone + GM-CSF + GALV-GP R-a that is currently being evaluated in multiple indications such as Melanoma (including anti-PD1 failed), Non–Melanoma Skin Cancer (NMSC – including anti-PD1 failed), MSI-H cancers and non-small cell lung cancer (NSCLC). The candidate is being studied in a Phase 1/2 clinical trial namely IGNYTE, to understand the efficacy and safety of oncolytic immunotherapy RP1 given in combination with nivolumab. 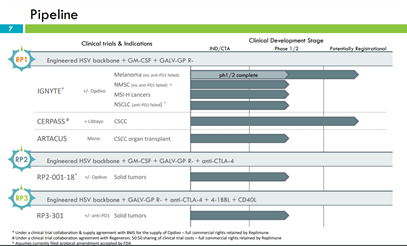 In addition, the Company is also engaged in a phase 2 clinical trial named CERPASS, which is evaluating the effects of cemiplimab alone versus a combination of cemiplimab and the investigational oncolytic immunotherapy RP1, in cutaneous squamous cell carcinoma (cSCC) and a Phase 1B clinical trial, ARTACUS, to study RP1 for the treatment of cutaneous squamous cell carcinoma (CSCC), in patients who underwent either a kidney or liver transplantation.

An Industry with Abundant Growth Opportunities

Lung cancers are categorized into Non-Small Cell Lung Cancer, the most common form of cancer with an incidence rate of over 85% that manifests as Adenocarcinoma, Large Cell Carcinoma and Squamous Carcinoma. Small cell lung cancer also known as Oat Cell Cancer, which spreads rapidly makes up for around 10% to 15% of the cases and finally Lung carcinoid or neuroendocrine tumors that are less than 5% of the diagnosis and grow slowly and rarely spread.

Lung cancers constitute 13% of all new cancer diagnosis and are the second most common cause of cancer. According to an estimate by the American Cancer Society, there will be over 228,150 new cases of lung cancer (116,440 in men and 111,710 in women) diagnosed in 2019, with about 142,670 deaths resulting from it eventually. The death rate for Lung cancer alone is higher than that of colon, breast, and prostate cancers combined. 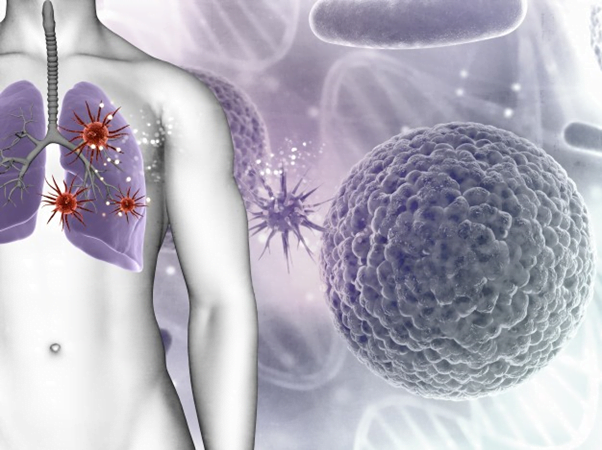 The Global Lung Cancer market is estimated to grow at a CAGR of 13.2%, during 2018-2022, to reach 36.93 billion by 2022 according to a report by Market Research Future. The rise in geriatric population, pollution levels, negative lifestyle conditions such as Active and passive smoking, increased healthcare expenditure and rapid scientific and technological advancements will drive the growth in the market.

The emergence of biomarkers such as epidermal growth factor receptor (EGFR), Anaplastic lymphoma kinase (ALK) and K-ras mutations (KRAS 1) have made the identification and management of lung cancer more accurate and manageable. These also help determine the optimal treatment plan for a patient, thereby avoiding the burden of undergoing treatments that may not be appropriate and the related side-effects.

Melanoma, a form of skin cancer, accounts for about 1% of skin cancers but is responsible for over 7,230 deaths every year as per an estimate by the American Cancer Society, these numbers are steadily rising over the years with approximately 96,480 new melanomas diagnosis being made each year. WHO places the global incidences of melanoma at 132,000 new diagnoses each year.

The 5-year survival rate for this illness has shown a significant improvement with faster and timely diagnosis, aggressive skin cancer screening programs for populations at greater risk of contracting the disease and rapid advancements in surgical and therapeutic options.

Global data predicts the global treatment market for melanoma to reach $5.64 billion by 2023 from $1.34 billion in 2013 with a CAGR of 15.5%. The major drivers for growth in the market would be the expanding treatment options to include targeted combination therapies, deteriorating environmental condition leading to higher exposure to UV rays, favorable government and regulatory environment, patent expiration of certain biosimilars and launch of generics that are expected to pave the way for new players to enter the market.

However, the prohibitive cost of treatment may prove challenging and affect the growth prospects to an extent.

The Company has entered into a clinical trial collaboration and supply agreement with Bristol Myers Squibb (NYSE: BMY) for two of its candidates RP1 and RP2, and has been granted a nonexclusive, non-transferable, royalty-free license to Opdivo®, for use in combination with RP2. Replimune retains full commercial rights to the candidate.

Replimune is also conducting a registration-directed Phase 2 clinical trial (CERPASS) in CSCC that evaluates RP1 in combination with Libtayo versus Libtayo alone. Libtayo is an FDA – approved anti-PD-1 therapy for treatment of metastatic or locally advanced CSCC in patients who are not eligible for curative surgery or radiation. The Company has entered into a clinical trial collaboration agreement with Regeneron (NASDAQ: REGN) and will share the trial costs in the ratio of 50:50, while retaining the full commercial rights to the candidate.

In February 2020, the Company provided an update on its pipeline and announced multiple upcoming milestones. We take a look at them below:

RP1 – Replimune will report initial data from a cohort study in RP1 in anti-PD1 failed NSCLC in H2,2021, which is currently enrolling patients for a new cohort of 30 anti-PD1 failed NSCLC patients. In addition, the Company is likely to present initial data from a Phase 1b clinical trial of RP1 as monotherapy in solid organ transplant recipients with CSCC. The data will be presented in H2,2021, however the study has been impacted by COVID-19 as per the Company.

Data from a Phase 2 trial in RP1 in combination with Opdivo in melanoma and non-melanoma skin cancers (NMSC) has already been presented in October 2020 and has demonstrated deep and durable responses in anti-PD1 failed melanoma.

RP2 – Replimune will also provide an update from a Phase 1 clinical trial of RP2 alone and in combination with Opdivo for solid tumor patients. The Company has already reported positive data from the single agent RP2 portion, which demonstrated a durable response.  The Company is currently recruiting patients to study the candidate in combination with Opdivo. The data from the trail is likely to be presented in 2021.

RP3 – The Company intends to present the initial data from a Phase 1 clinical trial of RP3 alone and in combination with anti-PD-1 therapy for advanced solid tumors in H2,2021.

Furthermore, the Company is evaluating RP2 and RP3 for treatment of new indications in the solid tumor space, as they are intended to target less immune responsive tumor types, and is likely to share its initial development plans during mid-year.

Replimune has a 63,000 square foot state-of-the-art commercial scale in-house manufacturing facility and has completed the transfer of RP1 technology to a CMO. The Company plans to complete the technology transfer of RP2 by the end of this quarter. The facility is fully capable of meeting the global commercialization requirements of Replimune’s whole gamut of products.

Furthermore, the facility is in the process of fulfilling the first two comparability batches of RP1 and is on track to successfully complete QC testing.

The Company had $493.3 million in cash, cash equivalents and short-term investments as of 31 December 2021, as compared to $168.6 million as of March 31, 2020. The Company had made a public offering in October 2020 for approximately $250 million in gross proceeds. Replimune believes that these funds are sufficient to take care of its operational plans into H2,2024.