KemPharm – Collaboration and License Agreement for KP415 and KP484, its ADHD Candidates, May Help Reinvigorate the Company 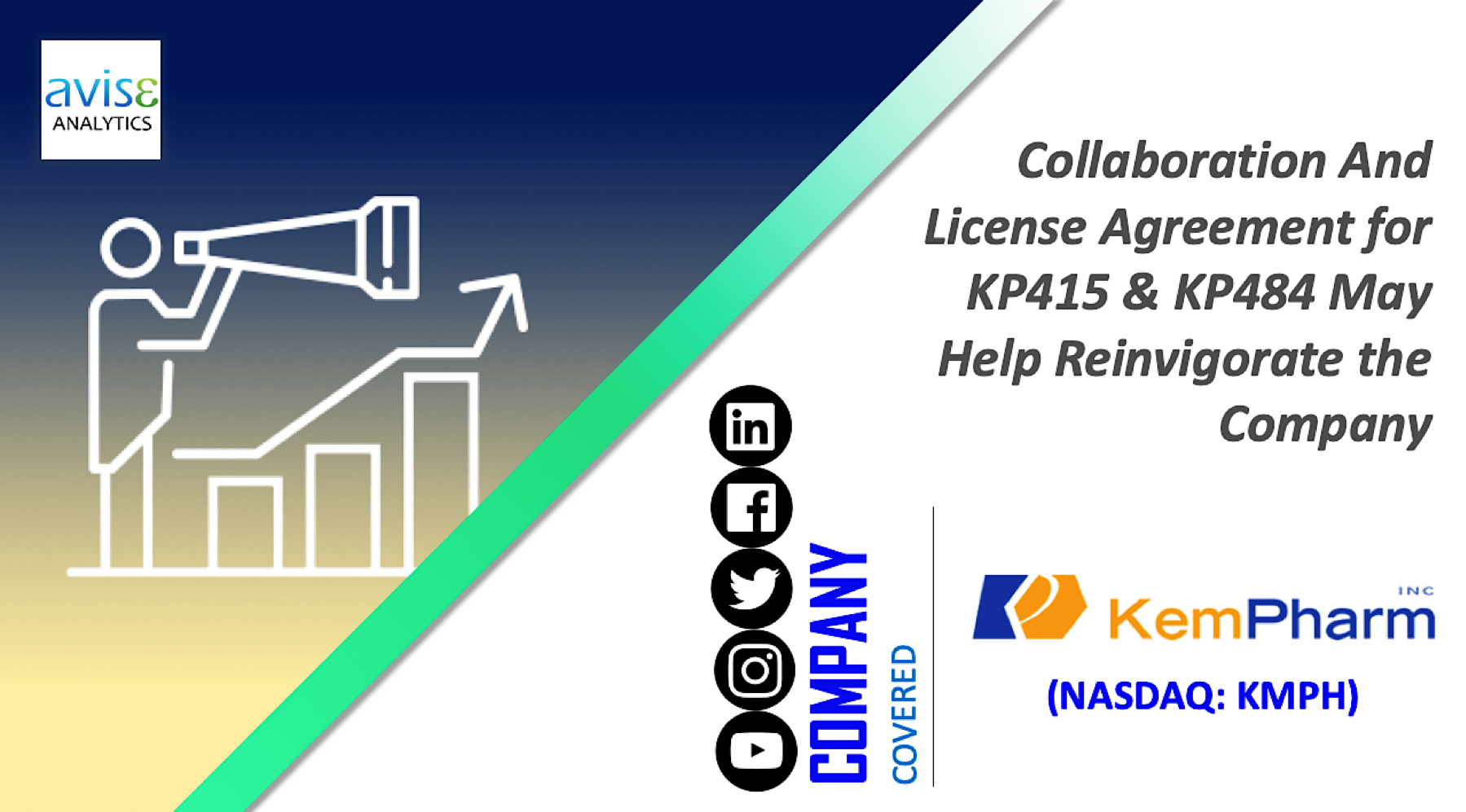 09 Sep KemPharm – Collaboration and License Agreement for KP415 and KP484, its ADHD Candidates, May Help Reinvigorate the Company

Posted at 11:52h in Biotechnology by admin 0 Comments
0 Likes
Share

KemPharm (NASDAQ: KMPH), a specialty pharmaceutical company, has entered into a collaboration and licensing agreement with an affiliate of Gurnet Point Capital (GPC) in exchange for an upfront payment of $10 million, in addition to receiving pre-approval cost reimbursements, regulatory milestone and sales milestone amounting to $483 million.

The company will also receive differential tiered royalty payments, on a product-by-product basis, for net sales ranging from high single digits up to the mid-twenties in the U.S market, and a percentage in the low to mid-single digits of net sales in other markets worldwide, according to a company statement.

Furthermore, GPC will have an option for some products in KemPharm’s pipeline, including KP879 (Stimulant Use Disorder) and KP922 (prodrug of amphetamine for ADHD).

“We believe Gurnet Point Capital is an ideal partner for KemPharm in the ongoing development and potential commercialization of KP415 and KP484, product candidates that we believe have the potential to reshape the ADHD treatment landscape”.

KemPharm has also entered into an Exchange Agreement with Deerfield for

“lowering the Company’s total outstanding debt by up to $22 million over a period of 240 days, and up to $30 million in the aggregate. On 4 September 2019, Deerfield initially exchanged principal amount of $3 million of KemPharm’s 5.50% Senior Convertible Notes due 2021 (2021 Notes) for 1,499,894 shares of KemPharm’s Common Stock and 1,576 shares of KemPharm’s Series B-1 preferred stock. KemPharm granted Deerfield a right to exchange, at Deerfield’s option, up to an additional $27 million principal of the 2021 Notes into a combination of KemPharm’s Common and/or Series B-2 Preferred Stock. The companies also amended Deerfield’s 9.75% Senior Convertible Note (the 2014 Note) to postpone the due date, add accrued interest to principal and reduce 9.75% coupon rate on the 2014 Note to 6.75% for the remainder of the term” as per a Company statement.

These two developments will help the company secure its financial position as well advance other candidates in its pipeline. 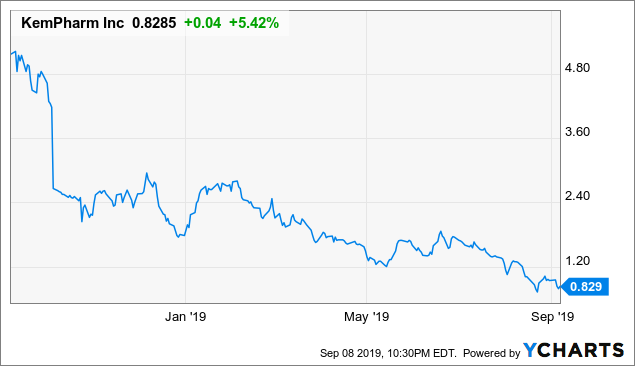 Attention Deficit Hyperactivity Disorder is a disorder in which signals sent to the parts of the brain that control attention and focus, are disrupted due to chemical imbalances and lead to behavioral issues like lack of self-control, inattentiveness, restlessness, hyperactivity and lack of impulse control. It is a malady that is affecting an increasing number of children today.

It is estimated that 6.4 million children between the ages of 4-17 have ADHD and the number of kids being diagnosed has seen a 42% increase over time. There is a stigma attached to mental disorders which acts as an impediment to seeking a diagnoses and professional help, lead to under-reporting of the prevalence of this disorder.

The global ADHD treatment market is expected to be worth over USD 24.9 billion by 2025, growing at a CAGR of 6.4 percent, according to a report by Grand View Research Inc. The growth will be on account of increased awareness and improved access to healthcare facilities. Conventional therapeutic options leave the children reeling under side effects ranging from lethargy, drowsiness, to lack of appetite and weight loss.

However, increased research and development efforts are bringing forth novel therapeutics that has the potential to transform the lives of those suffering from this disorder.

The company intends to leverage the advantages offered by its LAT technology, such as improved drug properties, by creating barriers to market entry by applying for Composition-of-matter patents not only for prodrug product candidates, but also for related compounds. KemPharm also plans to use the FDA’s 505(b) (2) NDA pathway, for prodrugs that can demonstrate the bioequivalence to an appropriate approved drug, which will help it reduce the time and expense incurred on account of preclinical studies. 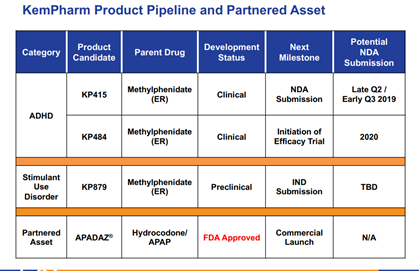 Its drug pipeline consists of KP415 and KP484 which consists of serdexmethylphenidate (SDX), KemPharm’s prodrug of d-methylphenidate (d-MPH), co-formulated with immediate-release d-MPH, for the treatment of ADHD and KP879, an agonist replacement therapy for the treatment of Stimulant Use Disorder (SUD). The drug offers faster onset, longer duration of therapy and delivers a consistent therapeutic effect, along with minimal abuse potential.

The candidates have been evaluated in a multicenter, randomized, parallel, double-blind, placebo-controlled laboratory classroom clinical trial, with a subject size of 150 children aged 6-12 years old, diagnosed with ADHD, in addition to undergoing a HAP ( Human Abuse Potential) study covering intravenous, intranasal and oral routes of abuse.

KP484, its co-lead clinical development ADHD candidate, is indicated for patients who require longer therapy duration and contains SDX. It is a first-in-class new methylphenidate-based product for adults with ADHD.

“The development cycle for KP415 is nearing its natural completion as we prepare to submit the NDA by the end of this year, and future development costs for KP484 will be the responsibility of the licensee. Combined with our continuing efforts to contain general and administrative costs, KemPharm’s near-term cash requirements have been reduced, allowing us to fully support our partners and continue to develop our product candidate pipeline.”

KemPharm entered into a technology licensing and assignment agreement with Genco Sciences, LLC (Genco) in October 2017, for using Genco’s proprietary nano-particulate amphetamine technology to develop a unique prodrug for the treatment of pediatric Tourette’s syndrome in cases where it is accompanied by ADHD.

Genco has previously received an Orphan Drug Designation for its product candidate. KemPharm would be financing the product development in exchange for full intellectual property and commercial ownership of any product developed as a result of this agreement, while Genco will receive a royalty and additional milestone payment.

“Taken together, the License Agreement and the Exchange Agreement provide the opportunity to transform our financial position; we have secured a commercial partnership for our two co-lead ADHD candidates, reduced external development spending, reduced interest expense and cash interest payments, and created the possibility of significant balance sheet improvement through potential debt reduction over the next eight months. 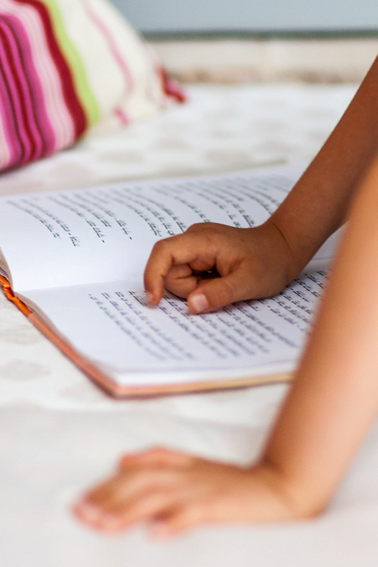 KemPharm is taking proactive steps to lower its debt and finding partners that can help advance its clinical candidates. The company will benefit greatly in case it is able to expedite the commercialization of produces APADAZ® (benzhydrocodone and acetaminophen), ensuring a potential revenue stream and financial stability.